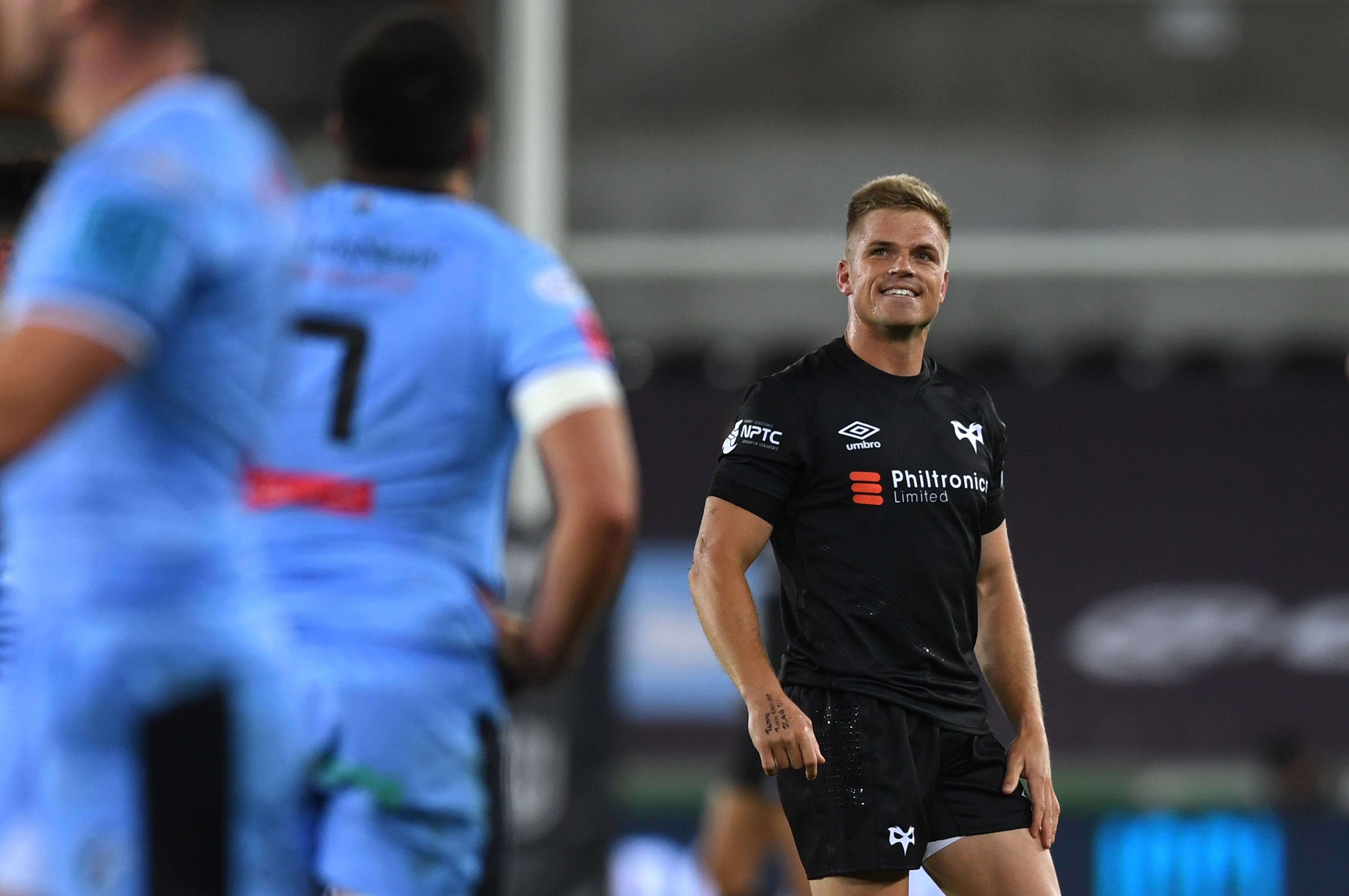 There was no doubt that this game was indeed a Welsh derby, as rivals Ospreys and Cardiff Rugby went hammer and tongs from the first whistle to the last.

Only one try was scored in the first half, courtesy of returning British and Irish Lion Josh Adams, regathering a rebounded attempt at goal to score an unorthodox try. The rest of the points belonged to the two outside halves. Cardiff Rugby’s Rhys Priestland converted the only try of the half, and four from the tee for Ospreys’ Gareth Anscombe gave the hosts a five-point buffer at the interval.

Half time score and the Ospreys take the lead going into the break #URC pic.twitter.com/PZCfpzV7A8

Gareth Anscombe
“I just kicked my goals. It wasn’t pretty but we won the battle up front.”

It was Cardiff Rugby that took an early advantage in the second half, however, and after a strong period of possession deep in Ospreys’ 22, Cardiff Rugby winger Owen Lane got over in the corner to add a second try to their tally.

However, ill-discipline from the boys in the blue shirts cost them dearly, and two accurate penalty goals from outside half and eventual Player of the Match Anscombe recaptured the lead and saw them to a famous win at the Swansea.com Stadium.

🗣️ "We can be a hell of a lot better, but it's an important one for us at home."#URC #OSPCAR pic.twitter.com/Ywnbul6u0l

Rhys Webb
"We kept our cool; kept our composure, and came away with an important win.”

Only a minute into the encounter, Cardiff Rugby conceded a penalty on halfway and Ospreys outside half Gareth Anscombe wasted no time in sending the ball over to nudge his team into an early 3-0 lead.

Ospreys started to assert their dominance at the set piece, earning themselves two penalties at the scrum and alleviating pressure after a good surge up-field from the boys in blue. Cardiff Rugby lock Seb Davies put in an early hit on Ospreys centre Owen Watkin, too early, and a penalty goes the Ospreys way. Anscombe lined up the kick from the tee and an accurate boot doubled the Ospreys’ score to 6-0 after 15 minutes.

Cardiff Rugby outside half Rhys Priestland hit the post with his penalty attempt, but the ever present Cardiff Rugby winger Josh Adams collected the rebounded ball and dotted down for a try against the run of play. Priestland’s conversion was good, however, and Cardiff Rugby took the lead for the first time just short of 20 minutes into the game.

The visitors illegally brought down the Ospreys maul, which was formidably rolling into Cardiff Rugby territory, and the hosts opted to kick to the corner. Once more the maul was set but Cardiff Rugby dealt with it the second time and forced a defensive scrum on their 5m line.

The visitors concede yet another penalty and the match officials gathered to view the on-screen footage which appeared to show Cardiff Rugby scrumhalf Tomos Williams making an illegal tackle on Ospreys winger Luke Morgan. The half-back was shown a yellow card for foul play and outside half Anscombe converted his third attempt at goal to edge the Ospreys back into the lead with a little over ten minutes remaining.

An unpopular decision moments later as Michael Collins was deemed to have made a high tackle on Hallam Amos, and it was the Ospreys’ turn to compete with a man down for ten minutes. However Ospreys continued to apply pressure and another penalty at the scrum yields a fourth opportunity at goal for Anscombe.

It was a frenetic end to the first half as both Ospreys and Cardiff Rugby refused to put the ball out, but it finally ended with a dropped ball and the Ospreys go into the interval nursing a five point lead.

Cardiff Rugby found themselves in a decent position having won a penalty from the scrum, and kicked to the corner to assault the Ospreys line. After several phases of hard carrying, the ball found its way out to the right wing where Cardiff Rugby winger Owen Lane dotted down unopposed in the corner. A difficult conversion ensued for Priestland, but the outside half made amends for his earlier miss and sent the ball sailing beautifully between the uprights. The visitors retook the lead 12-14 after just six minute of the second half having elapsed.

At the 50th minute mark, Ospreys earned themselves another penalty and once more Gareth Anscombe stepped up to take a shot at goal. And once more the outside half nails the attempts and Ospreys took the lead, 15-14.

Ospreys’ scrum dominance told again as they forced another penalty and kicked to the corner on the hour mark. It looked as if the boys in black had muscled over for their first try, however a fumble denied them their try and Cardiff Rugby would get an opportunity to relieve the pressure. They do, but it’s straight into another penalty as the count keeps going up for the visitors. The hosts opted for the posts this time, however, and Anscombe nailed his sixth consecutive kick of the evening to widen the gap to four with 15 minutes left to play. 18-14.

As the 70th minute came and went, trouble arose for the Ospreys as Michael Collins went down injured and hobbled off, leaving the Ospreys short a back in closing moments of the game.

However, with openside flanker Jac Morgan slotting in at centre, Ospreys were able to keep Cardiff Rugby at bay and seal the win, with replacement outside half Josh Thomas thumping the ball into the stands at the 80th minute.

Ospreys are now two wins from two games in the United Rugby Championship. Come support the boys as they seek to remain undefeated after round three.