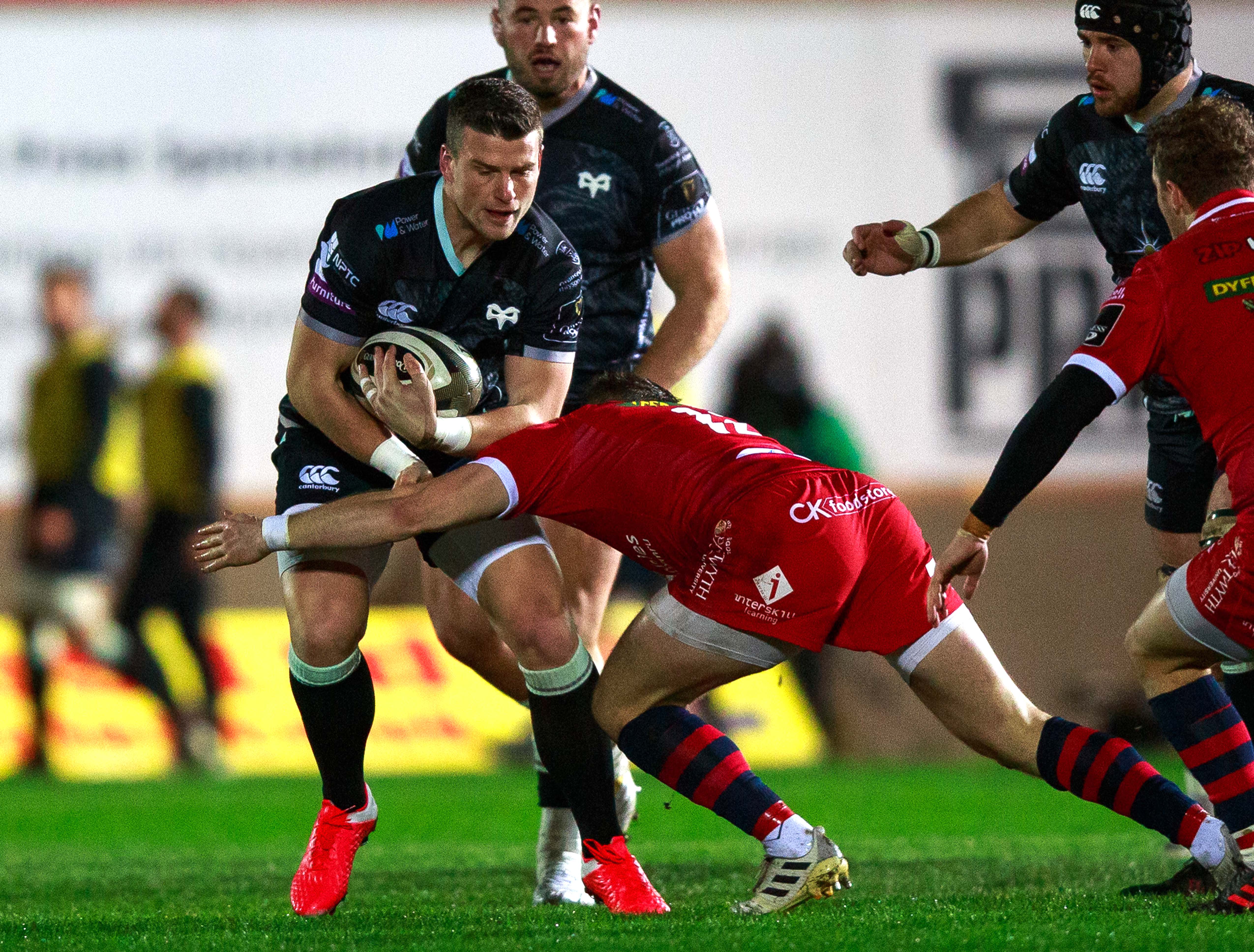 The Ospreys claimed Parc y Scarlets as their unlikely home venue for this Boxing Day derby; but a fact that both head coach Toby Booth and the playing group deny will have any bearing on the mindset and the preparation for the game.

Scarlets had a strong start to the first half, just inches short of breaching the Ospreys defence and scoring a try; but valiant defending relieved pressure. It was in fact the Ospreys that got the first points on the board through the ever-reliable boot of outside half Stephen Myler.

Ospreys scrumhalf Reuben Morgan-Williams ran in Ospreys’ first try, and Scarlets outside half Dan Jones retaliated with a penalty soon after. Two missed shots at goal from the Scarlets meant that the Ospreys clung onto their five-point lead at half-time.

The two outside halves exchanged a pair of penalties each in the second half, but the fateful moment came with just ten minutes remaining. Replacement back row Blade Thomson played a key role in setting up the try for Scarlets’ Angus O’Brien, and the conversion took his side into the lead for the first time.

The Ospreys never got any significant possession after that point and the Scarlets ran the clock down effectively, closing the game out and securing a gritty derby win.

An error at an early lineout benefitted Scarlets, giving them an opportunity to press the Ospreys line, but the Ospreys defended well and kept the hosts out.

Scarlets lock Jake Ball gave Justin Tipuric a nudge in the air at a lineout, and Welsh referee Adam Jones awarded the Ospreys a penalty. Myler, true to his form all season, knocked over the penalty and edged his side into a 3-0 lead.

A fantastic turnover at the ruck from captain Justin Tipuric gifts the Ospreys the ball in a prime attacking position. As the ball made its way infield, scrumhalf Morgan-Williams threw a dummy from the base of the ruck and showed a clean pair of heels to run around fullback Angus O’Brien, and score the opening try of the evening. The ball was blown off its tee and Myler was unable to re-set in time before the Scarlets chasers got to the kicker to disrupt the conversion attempt.

A penalty from the restart gave Jones an opportunity for Scarlets to claw three points back.

On the cusp of half-time, a penalty at the scrum afforded Angus O’Brien a shot at goal, but the kick went awry, and Ospreys headed in at half-time, 8-6.

A penalty awarded to the Ospreys within a minute of the start of the second half resulted in Myler sending the ball sailing between the uprights.

Scarlets had a long old go at getting over the Ospreys line, but wave after wave of carrier were successfully repelled, so the men in red opted to take the three points off the tee.

Scarlets were caught offside in defence, and once more Myler stepped up to the mark to extend the Ospreys’ lead to eight points once more.

It was the Ospreys’ turn to give away an offside penalty, and Scarlets’ Jones added another three points to his tally.

A kick for nothing returns the goods for the Scarlets, as Blade Thomson reclaims the ball and fullback O’Brien receives the offload to run in under the posts. The conversion was successful and the hosts found themselves in the lead for the first time in the game.

Scarlets never relinquished control in the dying moments of the game, and as the clock neared the 80, the Scarlets simply recycled the ball for phase after phase, until the clock turned red.

A disappointing result for the Ospreys, who were in a realistic position to defeat their rivals; but after a moment of reflection, focus will now shift onto the next Welsh derby against Cardiff Blues in the first game of 2021.