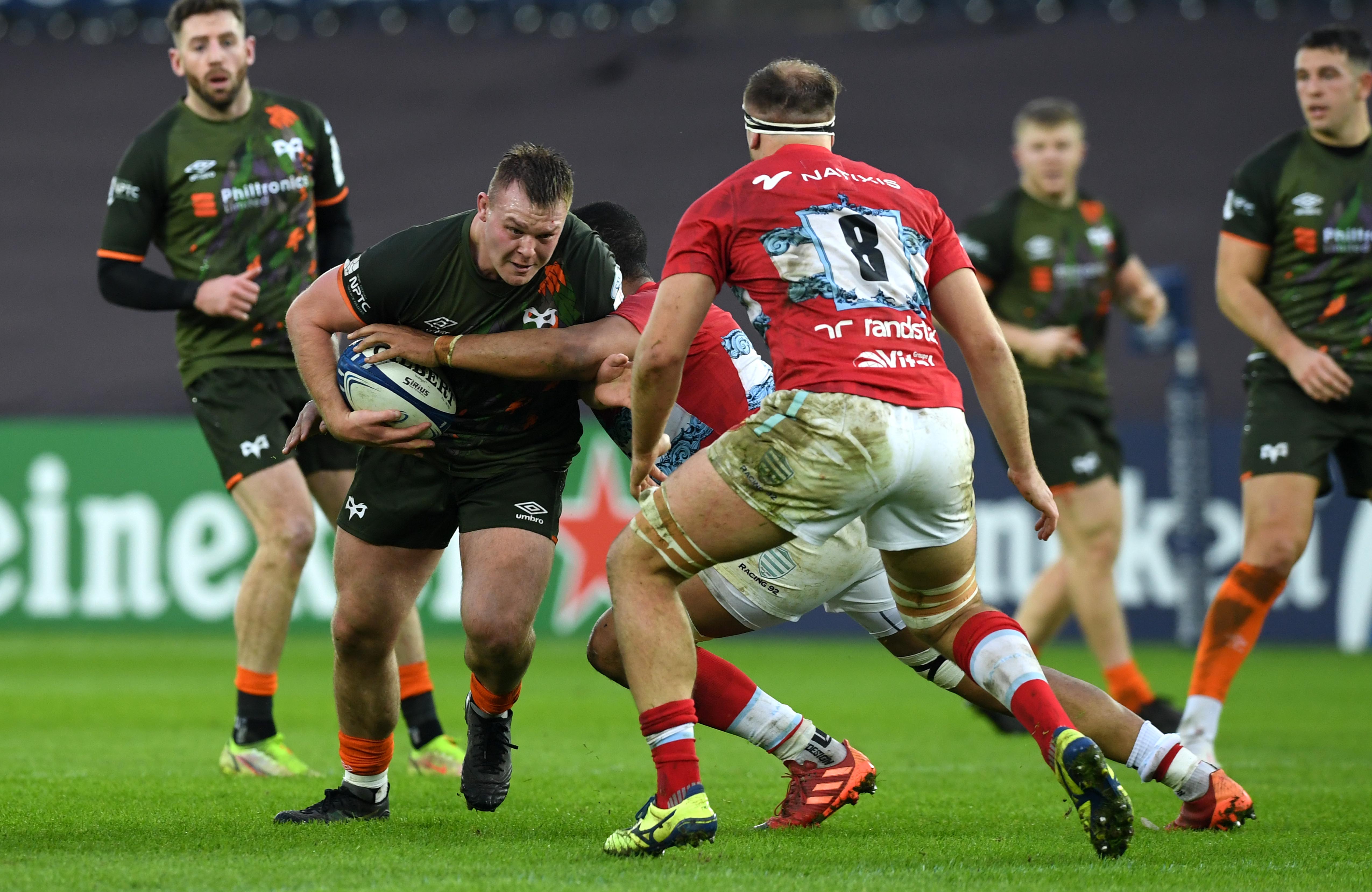 It was a cold and glum night in Swansea, but things were about to heat up under the floodlights as Racing 92 prepared to kick off the match.

It was the Frenchmen that got up on the scoreboard first, through the boot of scrumhalf Maxime Machenaud. However, it was the Ospreys that landed the first body blow through centre Keiran Williams, who was making his first start since October 2021. A series of powerful and determined carries from the Ospreys rocked Racing onto the back foot and when the ball was popped up for the centre, Williams burst onto it and barrelled over the try line for the first try of the game, which was converted by outside half Gareth Anscombe. The outside half went on to convert another penalty from the tee moments later and gave his side a seven-point lead.

Toby Booth, Ospreys head coach
"We created enough opportunities, especially in the first half, but the best team are going to keep coming at you."

Racing 92 struck back on the 30th minute, with the ball spun wide to French international Teddy Thomas, who chipped over Ospreys’ fullback Mat Protheroe and hacked on before the Argentinian international, Juan Imhoff, grounded the wobbling ball over the try line. The conversion was askew and Ospreys clung on to a two-point lead.

Two chances went begging for the Ospreys, a dropped ball on the left wing which could’ve seen a lightning-fast footrace between Racing’s Thomas and Ospreys’ Luke Morgan; and another when Protheroe looked for all the world as if he was to intercept a long pass and sprint away unopposed, but the speedster was unable to hold on to the ball and Racing were let off the hook again.

The opening exchanges of the second half were just as physical as the first, but a deliberate knockdown by Ospreys flanker Will Griffiths meant the Ospreys faced another ten minute stint with a man down.

Despite some incredibly physical defending, Racing 92 secured two tries and a penalty. The first try came from a scrappy loose ball on the ground, which allowed Racing’s Gael Fickou to break up the field, and feed fellow centre Virimi Vakatawa to run in under the posts. The final try came courtesy of Teddy Thomas, who managed to get the ball in space out on the wing and used all his deceptive feet and strength to get over the line.

Full time score and Racing 92 claim the victory here at the https://t.co/HsgsTwJv7s Stadium

Toby Booth, Ospreys head coach
"We’re getting better. You can see on the field that they care about it, a lot of intensity but we need to be more accurate."

Both sides looked to play attacking rugby, but neither could maintain possession for any sustained periods. However, after a line break from Racing’s hooker Baubigny, Ospreys winger Alex Cuthbert got pinged for a high tackle and was sent to the sin-bin for ten minutes. Racing scrumhalf, Machenaud, converted the penalty into points to nudge his side into an early 0-3 lead.

Racing applied the pressure close to the line, earning a series of penalties on the bounce but solid Ospreys defence kept the Parisians out.  Aggressive tackling from the hosts forced Racing into handling errors, which turned into positive Ospreys possession. Carry after carry, with a darting run from Ospreys scrumhalf, saw the ball popped up to centre Williams, who hit the ball like a freight train and over for the try! Anscombe converted and as the game entered it’s second quarter, the Ospreys took the lead, 7-3.

It didn’t take long for the visitors to throw their weight behind their pack, however, with a lineout deep inside the Ospreys’ 22 they launched a fierce attack. But an enormous turnover from flanker Jac Morgan relieved the pressure and the counterattack was on! Unfortunately, the pass from Anscombe to flyer Luke Morgan was dropped and against the grain of play, it was Racing that sighed a sigh of relief when play was brought back to the halfway line for the knock-on.

The tackling from the Ospreys was ferocious, and yielded a penalty at the breakdown which allowed Anscombe to kick his side further into the lead to make it 10-3 on the half hour mark.

Racing forced their way back into the game moments later, with winger Teddy Thomas chipping over the top and hacking the ball on for the other winger, Juan Imhoff, to pounce upon and score the try. Machenaud failed to convert, however, meaning the visitors remained two points behind with five minutes of the half remaining.

In the final seconds of the game, Ospreys worked their way into Racing’s 22 and only a scrappy turnover prevented the hosts from going over for a second try before the interval.

Despite being a man down, following a yellow card to Ospreys’ Will Griffiths, staunch defending from the men in green not only kept the Parisians out, but earned a penalty just inside Racing’s half, but the attempt at goal dropped short. On the counter, Racing struck back with Gael Fickou the beneficiary of a loose pass, and the centre presented the ball beautifully for his fellow French international centre, Virimi Vakatawa, who sprinted over for a wonderful try. Racing’s Gibert added the conversion and Racing took the lead for the second time, 10-15 ahead of the hour mark.

It looked as if replacement hooker Camille Chat had driven over from a mobile maul, and after a close inspection from the TMO, the ball was in fact held up and Ospreys escape momentarily unscathed.

From the halfway line, Racing’s Russell launched the ball between the uprights to extend his side’s lead to 10-18 with a little over 12 minutes left to play. Another long kick from Russell gave Racing 92 an excellent attacking platform deep inside Ospreys’ 22, and winger Thomas finally found some space out on the wing to score Racing’s third try of the evening, converted by Gibert to give Racing a seemingly unsurmountable 15-point lead in the final six minutes.

It proved to be so, with the Ospreys spilling the ball in contact near halfway gifting Racing one last shot at the bonus point, but were contained by the defence and the game ended with both sides looking completely spent.

“I thought we gave them a fright. They [the Ospreys] were doing stuff to be proud of, but we need to be more than a 40minute team. We created enough opportunities, especially in the first half, but the best teams are going to keep coming at you.

“In the second half I think they started to win more collision but we created enough turnover. We couldn’t build pressure in their half, positive intent but poor accuracy. We’re getting better. You can see on the field that they care about it, a lot of insanity but we need to be more accurate.

“Sale will be very similar. It was a massive collision-fest when they came down here and we expect it to be no different next weekend.”