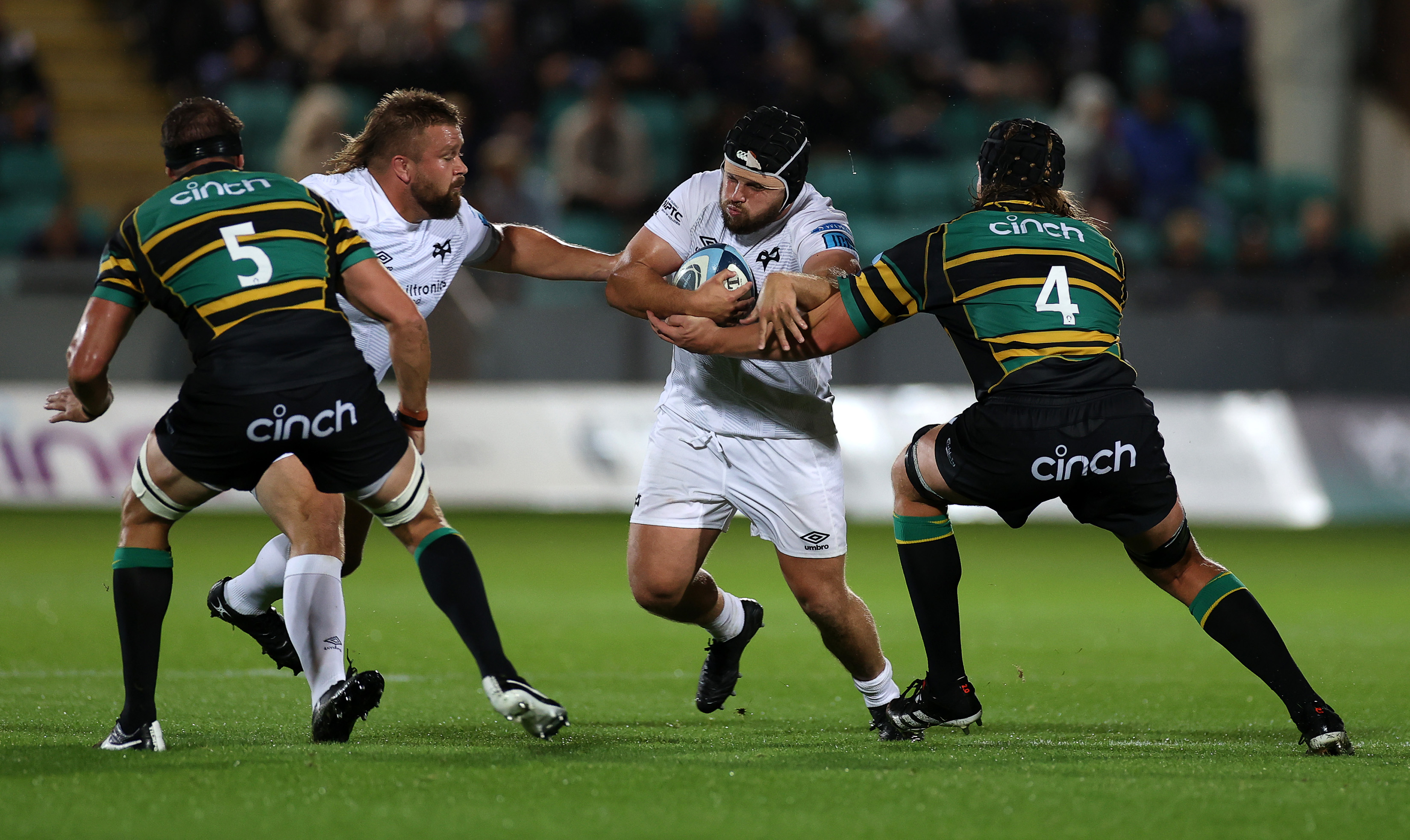 It was a frenetic, high scoring, and thrilling encounter between these two heavyweights, with more than just a few moments of fronting up by both sides. Ospreys named a squad brimming with young talent and they certainly put on a show for the supporters in the stands, and for those watching live online. This game also marked the return of Gareth Anscombe, making his Ospreys debut after suffering a long-term injury on international duty.

An entertaining first half as saw both sides claiming a try within ten minutes of kick off. Northampton winger Tom Collins opened the scoring down the wing before a glorious Ospreys counterattack was finished off by his winger Mat Protheroe.

However, Saints retaliated with two consecutive body blows through their other winger, Tom Litchfield, and scrumhalf Alex Mitchell, to give the hosts a handy 21-7 lead going into the break.

Gareth Anscombe
"It’s been a long process, but I finally get to run out with the boys. It’s the start of my journey with Ospreys."

Half time score of this preseason game @SaintsRugby 21-7 Ospreys pic.twitter.com/wvuXQ0zdaP

The deficit was swiftly overcome in the second half, with two incredible tries from the Ospreys taking them just a conversion shy of drawing level after just ten minutes of the half played. Speedster Luke Morgan defied the odds to dot the ball down in the corner and replacement scrumhalf Reuben Morgan-Williams received the offload from Max Nagy to score.

Saints found their way back into the game through winger Collins, scoring another for his side, followed by flanker Lewis Ludlam going over in the corner to pull away from the visitors. Ospreys’ centre Watkin ensured that only one score separated the two sides in the final minutes of the game, however, and despite a last opportunity to draw the game level at the death, the Saints clung on to win the friendly encounter at Franklin’s Gardens.

A fantastic nine-try exhibition of rugby to whet the appetite ahead of the launch of the United Rugby Championship in two weeks’ time.

Excited to see the return of rugby? Want to be in the crowd to cheer on the Ospreys?

It's not too late to #JoinUsInFlight and get your hands on an Ospreys season membership; with prices starting from just £40.

Enjoy all the benefits of a season membership, including 10% off Ospreys products in the retails store, two free guest passes, exclusive events and, of course, access to all nine United Rugby Championship games and two Heineken Champions Cup games.

And to @SaintsRugby for hosting us for a preseason run out! All the best for the rest of the season 😄 pic.twitter.com/7CxI43BNxr

Ospreys donned their white away jersey for the very first time this evening and showed real attacking intent after just thirty seconds. Number eight Morgan Morris hit a hard line on the counter, making the hosts aware of his pace from the off as he blasted through two defenders.

However, it was the Saints who had the first real opportunity of the game, launching the ball deep into Ospreys’ territory following a penalty from a scrum. The hosts hammered away at the Ospreys line for several phases before a long pass out to Saints winger Collins granted a walk in try. Outside half George Furbank added the extras from the tee, giving Northampton a seven-point lead after six minutes.

It was Northampton who went on the attack again, and after a line break from winger Collins, a long kick for territory took play deep into Ospreys’ half once more. However, the visitors unleashed a counter attacked laced with venom; centre Michael Collins intercepted a scrappy Saints pass and hared downfield before executing a wonderfully weighted kick-pass to speedster Protheroe on the right wing. The young flyer showed patience to collect the bouncing ball and scored in the right corner. Outside half Gareth Anscombe tallied his first points for the Ospreys, converting a difficult conversion to bring the game level at 7-7 after ten minutes.

Saints didn’t take long to go ahead once more, making the most of an overlap down their right side to release winger Litchfield, who cut back inside to canter in under the sticks. Outside half Furbank sent the ball between the uprights to add the conversion.

Ospreys found themselves in a strong attacking position having won the penalty, but Saints repelled the attacking maul and the Ospreys had to rebuild from outside the opposition 22. They attempted a second rolling maul, but a dubious collapse of the maul is deemed to have been legal, and Saints again keep the visitors out.

A length of the field counter-attack from the hosts forced Ospreys scrumhalf Rhys Webb to scramble back and take the ball over his own line. In a blink of an eye the visitors go from an attacking scrum near Northampton’s line to a defensive scrum on their own 5m line. Replacement scrumhalf Alex Michell took his chance from the base of the scrum and Saints went further into the lead with their third try; with Furbank maintain his 100% kicking record with his successful conversion.

A period of possession for the Ospreys yields a few penalties, and it’s a third attempt at a close-range driving maul. For the third time the visitors are denied as the referee awards Northampton a penalty as it looked like the Ospreys had crossed the whitewash.

However, Saints held on and both sides headed in at the interval with Northampton ahead by 14 points.

After three minutes, the Ospreys scored a sensational try. Protheroe sliced through the defence like a scalpel, and tore down the field, avoiding Saints defenders with ease and taking the ball into the opposition 22. Another lovely grubber kick through was pounced upon by flyer Morgan and the Ospreys claimed their second try of the evening. The conversion from Joe Hawkins was immaculate and the Ospreys narrowed the deficit to seven.

There was real hunger in the Ospreys’ attack as they carried the ball with power and purpose. A chip over the top baffled the Saints’ winger and Protheroe snagged the carrier, followed up by a wonderful turnover by openside flanker Jac Morgan. From the resulting possession, Ospreys cause more chaos in the Saints’ ranks and a hacked through kick from Watkin was regathered and scored by the man himself. The conversion was pushed wide, however, and the hosts remain in the lead by just two points after ten minutes.

Saints weren’t about to roll over and give up, however, and following a series of forceful carries they once again found space out wide for winger Collins to cross the try line. The conversion was hooked however, and the Ospreys found themselves trailing by seven points once more.

Saints got another try down the left wing, but this time from back rower Ludlam, capitalising on a clean break from Hutchinson. The conversion was missed but the Saints were pulling away, sitting on 31 points to Ospreys’ 19 with less than 15 minutes remaining.

Five minutes on, Morgan-Williams latched on to the pass of Nagy, who had made a robust break in the midfield, and still had work to do before diving over for the try, clawing back seven points following Hawkins’ conversion. Seven minutes remained on the clock, and five points separated the two sides.

In the final minute of the game, the Ospreys had one more roll of the dice to draw the game level, earning a penalty from a scrum and kicking to the corner; but some miscommunication at the driving maul resulted in a dropped ball. The Saints didn’t need a second invitation, snapping the ball up and kicking it dead to secure a hard fought victory.