The Ospreys have revealed a stunning new look ahead of this evening’s game against Saracens in London, with the unveiling of the new 2018/19 alternate jersey by Canterbury.

Based on the same linear design as the home shirt, which has been a huge hit with supporters since it’s launch earlier this month, the striking design is a departure from the traditional Ospreys look, putting the accent colour of arctic blue from the home shirt at the heart of the design.

It will be worn for the first time this evening when the Ospreys face Gallagher Premiership champions Saracens at the Honourable Artillery Company in the City.

Like the home shirt, the new alternate jersey features the very latest in rugby technology.

To enable the players to keep up with the demands of the game of rugby, Canterbury has designed a kit that delivers the best in function and fit. The new kit features a new one-piece crossover crew collar which reduces neck pump, keeping the players cooler and removing distraction. The forward facing side seam allows the jersey to twist with the player, aiding smooth movement. It also includes VapoDri technology, which is designed to wick moisture away from the body and maintain core temperature

The new Ospreys home and alternate shirt from Canterbury is available in store at the Liberty Stadium Club Shop, as well as online through shop.ospreysrugby.com and canterbury.com .

We have a full size range available from Small to 4XL in Pro (replica) and Classic with Junior sizes available in ages 6-14.

Season members, don’t forget you get 10 per cent discount instore and online, while Supporters Plus members you get an additional 10 per cent off.

Here it is folks, the 18/19 alternate Ospreys jersey by @canterburyNZ 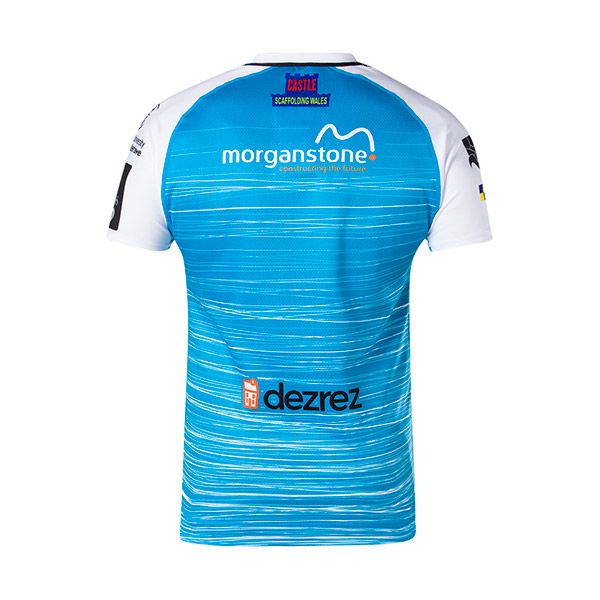 Canterbury has been committed to the game of rugby for 114 years and is currently team kit supplier to England Rugby, Ireland Rugby and Japan Rugby as well as Georgia and Canada, Bath Rugby and Ospreys. Canterbury has previously provided playing shirts to the New Zealand and Australia teams.

Canterbury was the official apparel partner for the British & Irish Lions New Zealand tour in 2017. Canterbury are also official kit supplier to Bath Rugby in the Gallagher Premiership; Ospreys, Cheetahs and Southern Kings in the Pro 14; Bordeaux Begles in the Top 14, and New South Wales Waratahs and the Sunwolves in Super Rugby.

Canterbury is the Official Sports Apparel Supplier for Rugby World Cup 2019 offering a range of apparel and will be seen on officials and the England, Ireland, Japan and Georgia rugby teams.

Canterbury has been a keen supporter of grassroots and development level rugby for many years and currently supplies playing apparel to clubs, schools and institutions globally.

The company’s global HQ is based in Nottingham, England.