The Ospreys Premiership Select will have a stunning new look when they launch their British & Irish Cup campaign this weekend.

In line with the region’s move to Canterbury this season, the representative side will wear a brand new, striking silver and black strip when they face Munster A at Swansea RFC on Saturday afternoon.

The new-look shirt features the logo of long-term commercial partner of the Ospreys, IJ Griffiths Builders of Whitland, thanks to a new sponsorship deal that sees the company become primary sponsor of the Premiership Select.

With 40 years experience in the building trade, proprietor Ieuan Griffiths has been involved with the Ospreys for a number of seasons, his company already sponsoring a number of individual players and enjoying Executive Club membership.

Speaking after seeing the new shirt for the first time, Mr Griffiths said:

“It’s a very proud moment for me, seeing the logo on the new Ospreys Premiership Select shirt. The British & Irish Cup is a great competition and I’ve always gone to these games in order to be able to identify the young talent coming through at the Ospreys.

“By supporting this team I’m investing directly in the future of the region as a long-term partner. It’s not about the here and now, or what may be happening this week or next, I believe in the long-term strategy for the Ospreys. I’m looking forward to seeing the team in action wearing the new kit this weekend.”

Wayne Hall, Head of Sales at the Ospreys, welcomed the continued support:

“Ieuan has been a loyal and passionate supporter for some time now, increasing his investment into the Ospreys every year.  He’s a familiar face at home and away games and we thoroughly enjoy working with him. He cares about the Ospreys and, importantly, about the hard work that goes into developing the next generation of local talent, which is why this new agreement makes absolute sense for all concerned.” 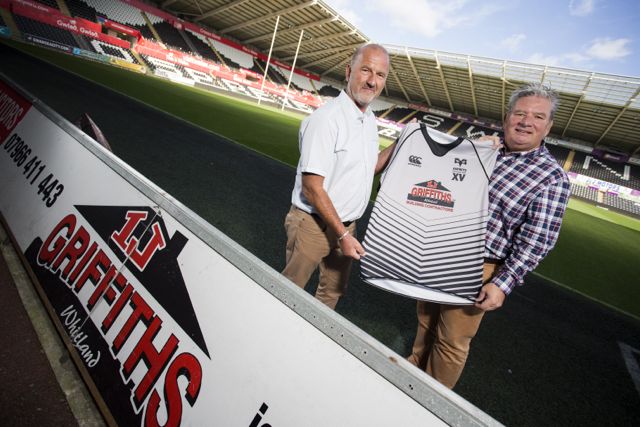 The Premiership Select will kick off their B&I Cup campaign at St Helen’s against Munster A on Saturday 14th October, 2.30pm KO. Admission is £10, Concessions £8, students and U16s free payable at the turnstile on the day only.

A week later they face Bedford away at Goldington Road on Saturday 21st October (3.00pm KO).

In December, there is a double header against Nottingham, with the away leg first up on Sunday 10th December, 3.00pm, at Nottingham’s Lady Bay Stadium, with the Gnoll hosting the return leg on Saturday 16th December at 2.30pm.

The final two rounds see Bedford visit the Talbot Athletic Ground on the weekend of 12/13/14 January (TBC in December following the confirmation of Champions Cup Rounds 5 and 6), with the final game of the pool stage, against Munster A, taking place on Friday 19th January at Irish Independent Park in Cork, 7.45pm kick-off.