The Ospreys have gone ‘back to basics’ for 2014/15 with a modern twist on their traditional black and white jersey.

The jersey for the new season, the first by global kit suppliers BLK, was unveiled at the Liberty Stadium today at a family fun day attended by more than 1,000 supporters.

Players, coaches, directors and commercial partners joined the supporters for the eagerly anticipated first viewing of the new-look playing strip that was shown off by Ospreys skipper Alun Wyn Jones and Dan Biggar, the highlight of a catwalk show featuring their team-mates, showcasing the full range of BLK merchandise.

The 2014/15 kit has a simple black and white design, recalling the fledgling days of the Ospreys and the earliest jerseys, fading into a grey panelling effect, a feature on the shirt between 2005 and 2008. The colour scheme will bring back some great memories from the Ospreys’ proud history, not least the win over a touring Australia at the Liberty Stadium in 2006. 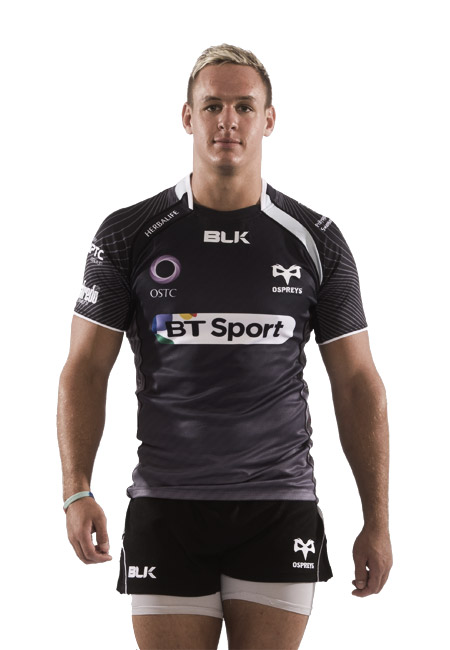 For the first time, the Ospreys jersey features the logo of new commercial partners BT Sport in the premium spot across the chest of the home jersey, with OSTC FX filling that space on the away shirt that will be revealed later this month.

Since 2006 the Ospreys jersey has become a sales phenomenon, proving to be the second biggest selling club or regional rugby jersey in UK and Ireland in every season.

An independent report compiled in 2013 by Running Rugby, a respected website aimed at ‘decision makers in league and union’ illustrated how the Ospreys continue to outsell their rivals, with sales running at double the number of the other three Welsh regions combined.

“The brand new Ospreys jersey is the best yet and will, I have no doubt, prove to be a massive hit with our supporters. Fitting of the start of a new relationship, BLK have taken the classic Ospreys look and updated it to create something that is modern and fresh that looks superb.

“BLK are a leading player in southern hemisphere rugby who are starting to make huge inroads into the European game. This is the first time that we have worked together on an Ospreys jersey and everybody is delighted with the result. Our shirt is already a sales phenomenon and with the input of BLK and their fresh ideas we can build on what is already an incredible platform.

“The quality of the playing and training kit, as well as the supporters range, is exceptional and will help to ensure the success of this year’s jersey. The boys love wearing their new kit and appreciate the first class quality, they believe it is the best we’ve ever had. I’ve no doubt everyone who purchases Ospreys BLK merchandise will feel exactly the same.

“It’s an exciting time for Ospreys Rugby, the start of a new era with a new kit provider, new commercial partners, new competitions and new players including a batch of young, talented Ospreys eager to play their part in the future of their region. Our supporters should share that excitement.”

“As a brand we are extremely pleased to have entered into a long term partnership with Ospreys Rugby and look forward to working with the team and assisting in the continued development of  game here in Wales through the provision of quality BLK player apparel and supporter ranges.”

“As BLK continues to establish itself  as the worlds leading supplier of cutting edge, high performance rugby apparel, it is vitally important that we join forces with like minded partners, allowing us to showcase our products at the highest levels and in the toughest conditions.

‘The Ospreys certainly provide us with that opportunity.”

The new Ospreys jersey and the range of BLK merchandise will be available instore at the Ospreys Club Shop from 12.30pm, and available to order online at shop.ospreysrugby.com. Please note that online orders of the jersey will be dispatched next week. Adult jerseys cost £54.99 with junior sizes priced at £44.99.

BLK will also supply the regional age-grade teams, as well as providing an extensive range of supporters apparel.

While a relatively new name in northern hemisphere rugby, BLK are a major player in the sports industry.

In Australia they are official kit supplier to Super Rugby teams the Queensland REDS, Western Force and Melbourne Rebels.

In addition, they provide kit to the Fijian and Samoan national teams, as well as leading rugby league and AFL sides.

The 2014 / 15 Ospreys player jersey has been created in BLK’s newly formulated Exotek fabric.  Exotek has been designed and developed exclusively by BLK to enhance athlete performance

Exotek is the strongest, lightest, most breathable and soft to touch fabric ever utilised by BLK

◦ Lycra neck – better fitting for players of all sizes and dimensions

BLK worked closely with the Ospreys management, coaching staff and players to ensure that the designs retained the clubs proud traditions, colours and heritage.

A host of designs were created during the process before the cutting edge, high performance garments being launched today were agreed upon.