Ospreys Rugby are delighted to announce that Eli Walker has signed a new contract with the region.

The 23 year old’s existing deal runs out at the end of the current season but he has signed a one-year extension which keeps him at his home region until the summer of 2017 at least.

The former Penyrheol Comprehensive School pupil has been in fine form recently with three tries in his last three games including an eye-catching finish against Clermont Auvergne at Stade Marcel Michelin on Sunday afternoon.

He came through the ranks of the regional development pathway after starting out at Gorseinon RFC, and played age-grade rugby for the Eyasses before making his senior debut as an 18-year old, coming off the bench in a Liberty Stadium win over Aironi in September 2010.

With pace to burn and an eye for the tryline he has scored 17 tries in 59 Ospreys appearances to date, a tally that places him 13th in the all time try-scoring list for the region having nudged ahead of James Hook and Stefan Terblanche last weekend.

Having featured in a number of Wales squads only for injury to prevent him from representing his country at senior level, he finally made his international debut against Ireland this summer in a Rugby World Cup warm-up before belatedly making it into the tournament squad as injury cover, albeit without featuring in the competition. 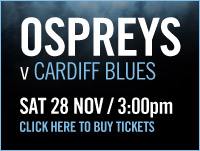 Now back at the region and firing on all cylinders, Walker is delighted to have extended his contract.

“This is the place I’ve always wanted to be, it’s where I played my rugby as a youngster and where I see my future” said Walker.

“It’s been a bit of a rollercoaster for me these last few months but I’m back playing for the Ospreys and really looking forward to making an impact over the remainder of this season and next year as well now.

“I’m in the right environment to get the best out of me, I’m looked after well here and I feel it’s the place I need to be achieve my ambitions as a player. Things have been going well the last few weeks for the team and for me personally and hopefully we can all keep working hard and improving as a group to get to where we need to be this season.”

“This is something that will excite all Ospreys supporters as Eli is a young man who has come through our system and takes enormous pride in representing his home region.

“He burst onto the scene as a teenager, but like plenty of youngsters in his position has had to deal with fitness issues that have maybe held him back a little. He has adjusted his routine and matured, both physically and as a rugby player, and we are seeing the benefits on the field.

“He had an interesting summer, in and out of the Welsh squad, but the international experience and his senior Wales debut are all pieces in the jigsaw that will help him become the player he has the potential to be.

“He now has the next 18 months to continue working hard, keep developing, and making an impact in the Ospreys shirt, and if he does that then supporters will be able to enjoy seeing him scoring tries for the region for many years to come.”