Ospreys Rugby are delighted to announce that centurion Ashley Beck has signed a new two-year contract with the region.

The 26-year old is close to an eagerly awaited return to action after damaging an ACL on the opening weekend of the season and has been handed a boost with a new contract which runs until summer 2018.

Having put pen to paper on his new contract, Beck said he’s looking forward to pulling on an Ospreys shirt once again:

“It’s been a tough year for me, it seems like a really long time since I played any rugby, but the good thing is that, fingers crossed, I’m raring to go and really excited about getting back into action. I’m someone that always wants to be playing every week but I’ve had to be patient and work my way back to fitness with the physios and conditioners. I’ve had great support, from them, from the coaches, everybody at the Ospreys, and now that I’m back in training I just want to pay them back for that support.

“We’ve got a really young group at the moment, that’s one thing that stands out for me. There’s so much exciting talent coming through the ranks, it’s really exciting to be a part of the squad at the moment and I’m looking forward to getting back out there and competing for a place.”

A product of the region’s player development pathway, Beck progressed all the way through the ranks from junior rugby at Skewen and Tonmawr, through to the Ospreys age-grade teams, before representing Aberavon in the Principality Premiership, scoring 26 tries in 68 games for the Wizards.

He became the youngest ever Osprey when he came on as a late second half replacement at the Liberty against Leinster in November 2007 still five months shy of his 18th birthday, going up against Brian O’Driscoll in midfield.

His first start came 18 months, and five appearances, later in a defeat to Munster on the final day of the 08/09 season. 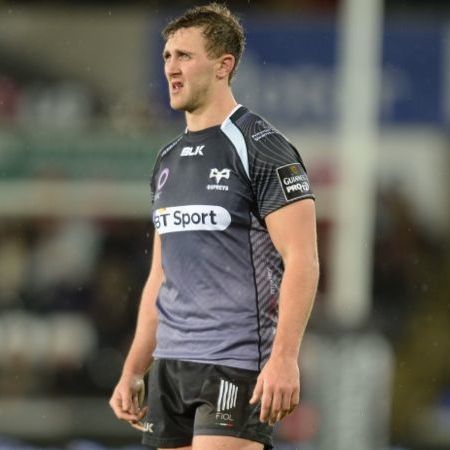 In January 2015 he became the 23rd player to reach 100 appearances for the Ospreys when he led the team out at the Liberty Stadium for a 22-11 win over the Dragons. His tally of 21 tries for the region to date including, famously, the Ospreys’ first in the dramatic 2012 PRO12 final win over Leinster in Dublin, is the ninth highest in the all-time list, with only Rhys Webb and Hanno Dirksen of the current squad scoring more.

Capped by Wales at all age-grade levels, he made his senior debut on the summer 2012 tour of Australia, playing in all three tests and starting in the second and third. He has worn the Welsh shirt on seven occasions in total and has scored two tries.

“Ashley is someone who is Osprey to the core, who has immense pride in representing his home region, and who has gained enormous experience despite still being a young man whose best days are ahead of him.

“His talent on a rugby field is clear and obvious to anyone who watches him. He’s had a pretty frustrating time with injury lately but his selfless attitude has been fantastic, contributing to the environment on a daily basis, driving high standards from the rest of the group. He’s used his time wisely while sidelined, developing his coaching skills and experience, something that’ll help his on-field development as well.

“The challenge he faces now as he approaches fitness again is to get himself up to speed and try and force his way back into the starting fifteen. With his positive attitude, he’s the kind of player who will thrive on that challenge which is great news for the Ospreys.”

In addition, the Ospreys have also confirmed the signing of in-form Crusaders centre/wing, Kieron Fonotia on a two-year contract for next season, and he will be joined at the Liberty Stadium by Scarlets and Wales prop, Rhodri Jones, and Dragons hooker, Hugh Gustafson.