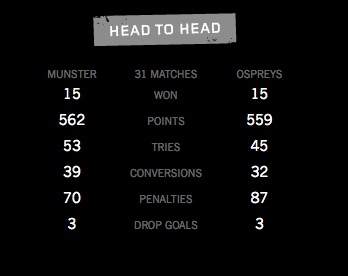 Munster are unbeaten in their last five Guinness PRO12 encounters, a run which has seen them now reach the Play-Off stage in five of the last six seasons, although none of those encounters have been played at Thomond Park since 2011. Their last defeat came at the Liberty Stadium in March, one of two losses to the Ospreys this season.

The Munstermen have won only one of their last nine semi-final appearances in all tournaments since 2008: 18-11 over Ospreys in Limerick in the PRO12 in May 2011.

The Ospreys have won their last six Guinness PRO12 matches since drawing 9-all at home to Leinster on 27th February. The Welshmen have won their last three away games in the tournament, and have never won four in a row on the road in the history of the competition. This is the Ospreys first appearance in the Play-Offs since 2012 with their two most recent appearances at this stage both being against Munster, losing in Limerick in 2011 but exacting revenge at Liberty Stadium a year later with a memorable 45-10 win.

The Ospreys achieved the PRO12 double over Munster during the regular season, being only one of two sides to have defeated Munster on their own ground this season - the other was Edinburgh.