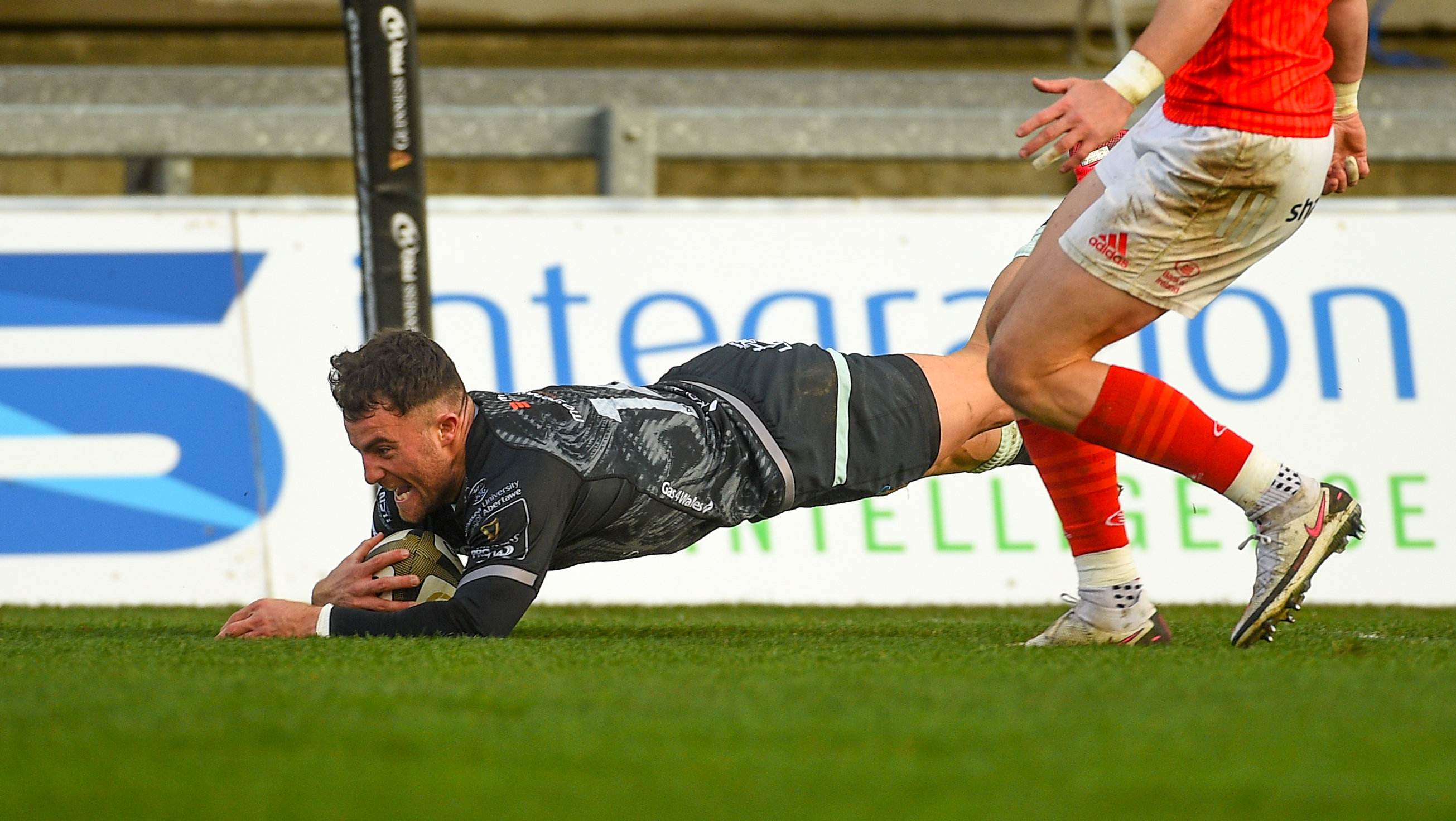 Despite a disappointing result against Leinster last week, there were plenty of positives to take away from the fixture, with many young Ospreys making their mark on the game.

This week saw the return of outside half Stephen Myler and centre Keiran Williams into the line up, while another young centre, Tiaan Thomas-Wheeler, was given the nod at outside centre. Mat Protheroe’s stand-out performance against the reigning champions merited him a spot in the Guinness PRO14 team of the week and made his first start at fullback against Munster. The front row had been rotated in the pack, with Gareth Thomas, Ifan Phillips, and Tom Botha starting while Rhodri Jones, Dewi Lake, and Ma’afu Fia began the game on the bench.

Ospreys drew first blood with a wonderfully worked try from a counterattack, launched from deep by fullback Mat Protheroe. He linked up with winger Luke Morgan who had more than enough pace to get to the try line unscathed. Munster struck back five minutes later through number eight Gavin Coombes, and fullback Mike Haley got over for a second less than five minutes after that to rush into the lead. Munster centre Rory Scannell and Ospreys outside half Stephen Myler exchanged penalties before Munster hooker Kevin O’Byrne took a third try from the back of a maul.

There would be a mountain to climb for the visitors, who would begin the half trailing 24-10 and a man down, with winger Morgan in the sinbin for a deliberate knock on.

The second half began much like the first ended, with Munster capitalising on Ospreys ill-discipline and making inroads from the lineout. The men in red slipped through multiple tacklers and powered their way over the try line, earning themselves a bonus point with only five minutes gone in the second half.

Ospreys’ young replacement hooker, Dewi Lake, burrowed his way to the line from a driving Ospreys maul and a penalty try near the end of the game narrowed the score-line to sixteen points. Unfortunately for the visitors, there wasn’t enough time left on the clock to mount a full-scale comeback and the Ospreys would leave Thomond Park with a 38-22 loss.

Dan Lydiate, Ospreys captain
“We can’t fault the effort of the boys, and everyone involved. We played right until the end, but we’ve just got to be consistently better. We need to progress each week.”
Full report

There was an early blow for the Ospreys as Bradley Davies suffered an injury to his right shoulder in the opening two minutes of the game, forcing the visitors to use their bench after barely 90 seconds.

A kicking battle ended up with an outstanding counterattack sparked off by the pace and footwork of Ospreys fullback Mat Protheroe. The young fullback snaked his way behind the Munster defence and found speed merchant and winger Luke Morgan on his right shoulder. There was no stopping the former sevens hero, and Ospreys outside half Stephen Myler sent the ball between the sticks to add the two points.

Phase after phase of picking and driving from the men in red steadily ate into Ospreys territory until Munster number eight Gavin Coombes charged over from a few metres out. JJ Hanrahan, Munster’s outside half, knocked over the simplest of conversions and the game was level.

A soft try yielded by the Ospreys, as Munster fullback Mike Haley cruised through a gap in the defence and sped away to the try line for a second score in the opening quarter. Hanrahan converted and Munster took a seven-point lead.

The scrum went down, and referee Gianluca Gnecchi deemed it was the Ospreys who collapsed it, and Munster’s replacement outside half Ben Healy took the three points for his side.

Ospreys centres Keiran Williams and Tiaan Thomas-Wheeler made two powerful runs into the midfield, folding the defence and forced Munster to concede a penalty at the breakdown. Outside half Myler kicked the available points from the tee and Ospreys claw back to within seven points.

A charged down box kick mounted pressure on the Ospreys, and having earnt a penalty from the breakdown, Ospreys wing Morgan was shown a yellow card for a deliberate knock on. The hosts opted for a kick to the corner and an unstoppable maul from the line crossed the whitewash. Munster hooker Kevin O’Byrne benefited from the shove, coming up with the ball for his first try of the game, and Healy converted the score to take the hosts up to 24.

Immediately from the restart, Ospreys conceded a penalty and Munster didn’t hesitate to pump te ball deep into Ospreys territory. There was no stopping Munster as again they made ground with each carry before Gavin Coombes claimed his second of the game, with Healy converting to stretch the lead.

Less than five minutes after that, Munster again took advantage of Ospreys mistakes and won a lineout deep in Ospreys’ 22. A penalty from the scrum and number eight Coombs benefitted from a quick tap and go and powered over for his hattrick.

Ospreys made a rare foray into Munster’s territory on the hour mark, and the pack formed a maul of their own. Munster couldn’t prevent the surge and young replacement hooker Dewi Lake wrestled the ball to the try line for Ospreys’ second try of the game. Myler was unable to convert the score so Munster remained 23 points in the lead.

Ospreys’ replacement scrumhalf Matthew Aubrey made a clean break from the base of the scrum and put in a long grubber for winger Morgan to chase. The speedster accelerated after the ball and forced Munster to kick the ball square to the line, giving the Ospreys a platform to attack from.

A powerful scrum in the shadow of the posts with only three minutes left to play, and the referee had no option but to award the visitors a penalty try after the red pack collapsed under the weight of the Ospreys shove.

Munster had a last period of attack against the Ospreys, but a mighty counter-drive at the maul and the game came to an end with the hosts on top.

“We can’t fault the effort of the boys, and everyone involved. We played right until the end, but we’ve just got to be consistently better. We just need to progress each week.”

“To compete with the best teams in the league we have to be consistent for 80 minutes and at the moment we’re not.” - Dan Lydiate, Ospreys captain