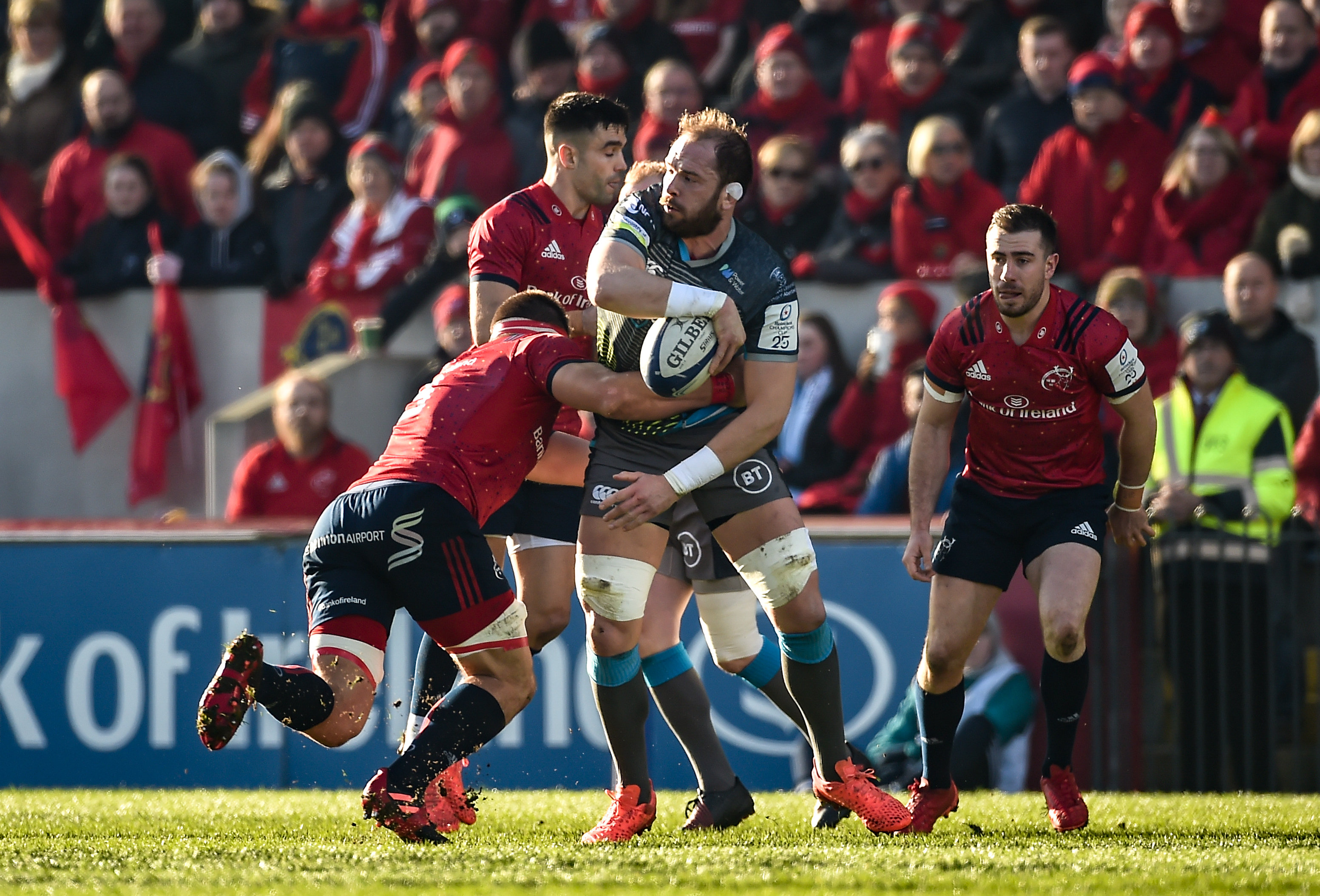 In the last of the Heineken Champions Cup pool games, Ospreys travelled to Limerick to face Munster on a bitterly cold afternoon at Thomond Park.

A late injury to both Scott Williams and Sam Parry, meant Dan Evans shifted to centre with Cai Evans moving to the starting lineup at fullback, with Lesley Klim and Dewi Lake coming onto the bench.

Luke Price opened the scores with a penalty despite the fly-half taking a huge hit only moments earlier. Price nearly looked to be away again minutes later after nicely spying an interception in mid-field before knocking on. Munster looked to capitalise but Ospreys remained on the front foot and defended valiantly to take back possession.

Price had the opportunity to extend the Ospreys score moments later with a penalty in the same spot to take the visitors 6-0 ahead.

Munster looked to answer back from the restart but good hands from the Ospreys kept the hosts away from the ball. A bat back from Hanno Dirksen to Alun Wyn Jones who swiftly offloaded the ball out wide to put the Ospreys on the attack. A loose pass found its way into Dan Evans hands but an interception from Munster put the hosts in control in our 22 before knocking on in attack.

A huge scrum from the Ospreys allowed Dan Baker to plough his way through the Munster defence and carry out of the attacking third. Support from the pack kept the Ospreys working through the phases resulting in a penalty against Munster for not releasing to allow Price to clear out of our own half.

A penalty just shy of the halfway line against Munster handed Cai Evans the difficult kick at the posts which flew just wide to keep the scores 6-0 with 25 minutes on the clock.

Looking to add their name to the scoreboard, Munster powered back into our 22. With advantages stacking up against the Ospreys, Munster edged closer to our tryline but the Ospreys did well to push them back and away from the whitewash. Going back for the early advantage, Munster took it quickly but knocked on in the process. Ospreys off the back of the scrum made the clearing kick but Munster still held a solid position and ran it back quickly, allowing CJ Stander to crash over the line for the try. JJ Hanrahan converting to take Munster ahead.

Munster had time for one more attack just before half-time. Playing with an advantage in hand, the hosts battled their way through with Stephen Archer diving over the line for the try. Hanrahan with the conversion to call an end to the first half.

Running out for the second half, Munster made a strong start blitzing their way through the Ospreys defence into our 22. But a quick turnover from the Ospreys and penalty in our favour allowed Cai Evans to clear up field.

But the Irish side quickly worked their way back into our half and a quick series of passes out wide took play metres from the tryline. Connor Murray picked up from the base of a ruck and spied the line to score the third try for the hosts to take the side 19-6 ahead with no conversion.

Ospreys were forced to reshuffle the pack once more, with Dan Evans forced off the field and Sam Cross taking his place. Skipper Justin Tipuric moving to cover the centre position.

Munster looked to take advantage and a clean break from Craig Casey sent Munster over for the bonus-point try. Hanrahan with the extras.

Just before the final whistle, Munster completely dominating the territory looked to go again in the Ospreys 22. The referee deciding to hand Olly Cracknell a yellow card for an offside to put the Ospreys down to 14. Utilising the extra man- Munster crashed over the line with CJ Stander going over for the brace. Hanrahan converting to put the final score at 33-6.