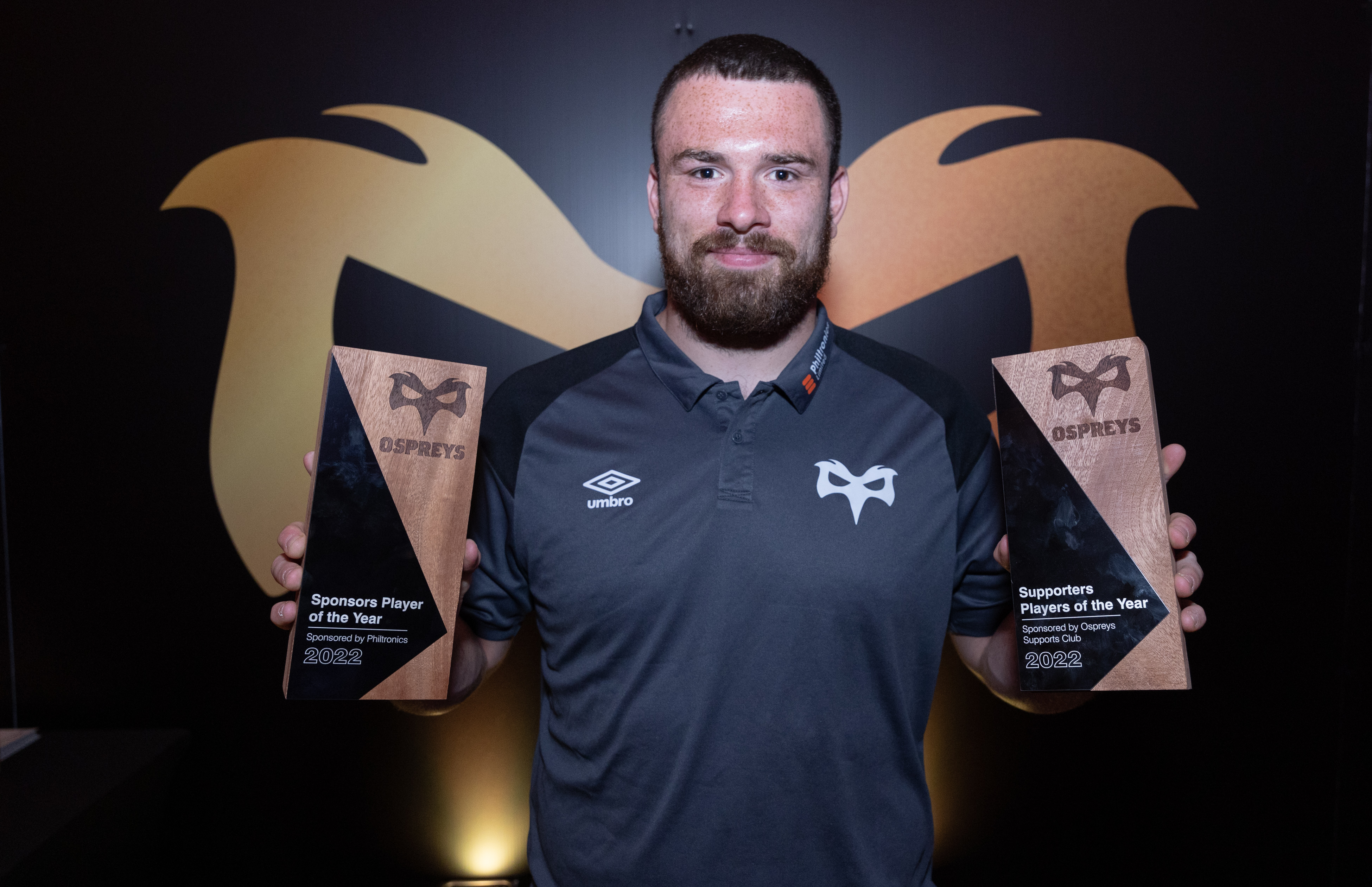 Morris picks up the double at End of Season Celebration

It was a night of celebration on Saturday evening at the Brangwyn Hall when members from in and around the community joined the Ospreys playing squad to celebrate the 21/22 season both on and off the field.

Morgan Morris picked up the double, winning the vote for Supporters Player of the year and the Sponsor's Player of the Year, selected by our title partner Philtronics.

Ospreys age-grade and Women's team manager, Linda Daniel picked up the award for Volunteer of the Year for all her relentless work throughout the season.

Dunvant RFC secured the win for community club of the year for all its hard work which includes running 17 teams from U4s up to senior level and a newly formed female hub as part of the East Swansea Hawks. As well as opening its doors to numerous community groups and gatherings, including the first Sporting Memories group along side Ospreys in the Community, supporting those living with dementia, the home of Dunvant male voice choir and even a Ukulele Club

Ysgol Gyfun Ystalyfera won the award for community school of the year for their success both on and off the field. On the field, their u18’s (First XV) recently won their Cup final match at the Principality stadium, featuring many of the future Ospreys who currently sit in the academy programme such as Rhodri Lewis, Morgan Morse and Kian Abraham.  Off the field, the school has been hosting Ospreys in the Community’s TACKLE programme supporting those that are disengaged and in danger of dropping out of school.

Ospreys Wheelchair Rugby Player of the Year went to Kyran Bishop because of his commitment and drive and giving 100% everytime he takes to the court and being a positive role model for the sport.

Ospreys Women's Pathway Player of the Year was awarded to 17-year old Women's Captain Jess Rogers for leading the team this year ahead of being selected in the undefeated Wales U18s Women's squad in their U18s Six nations Festival.

Supporters of the year went to Cheryl and Wyn for their outstanding efforts over the years to never miss a match home or away and being Ospreys to the core!

Pathway Player of the Year was awarded to Harri Deaves for his impressive performances for the Ospreys this season, including a try scoring debut against the Sale Sharks.

Try of the season with a staggering 70% of the vote was given to Michael Collins for his try against the Scarlets in the West Wales Derby.

Ospreys would like to thank event sponsors Worthington's and our award sponsors, Philtronics, HSBC, RNA Plant Ltd, The Ospreys Supporters Club and Buffoon Media for all their support.

We'd also like to thank Hayley McQueen and Sean Holley for hosting a fantastic evening and Toploader and the Showhawk Duo for providing the outstanding entertainment.