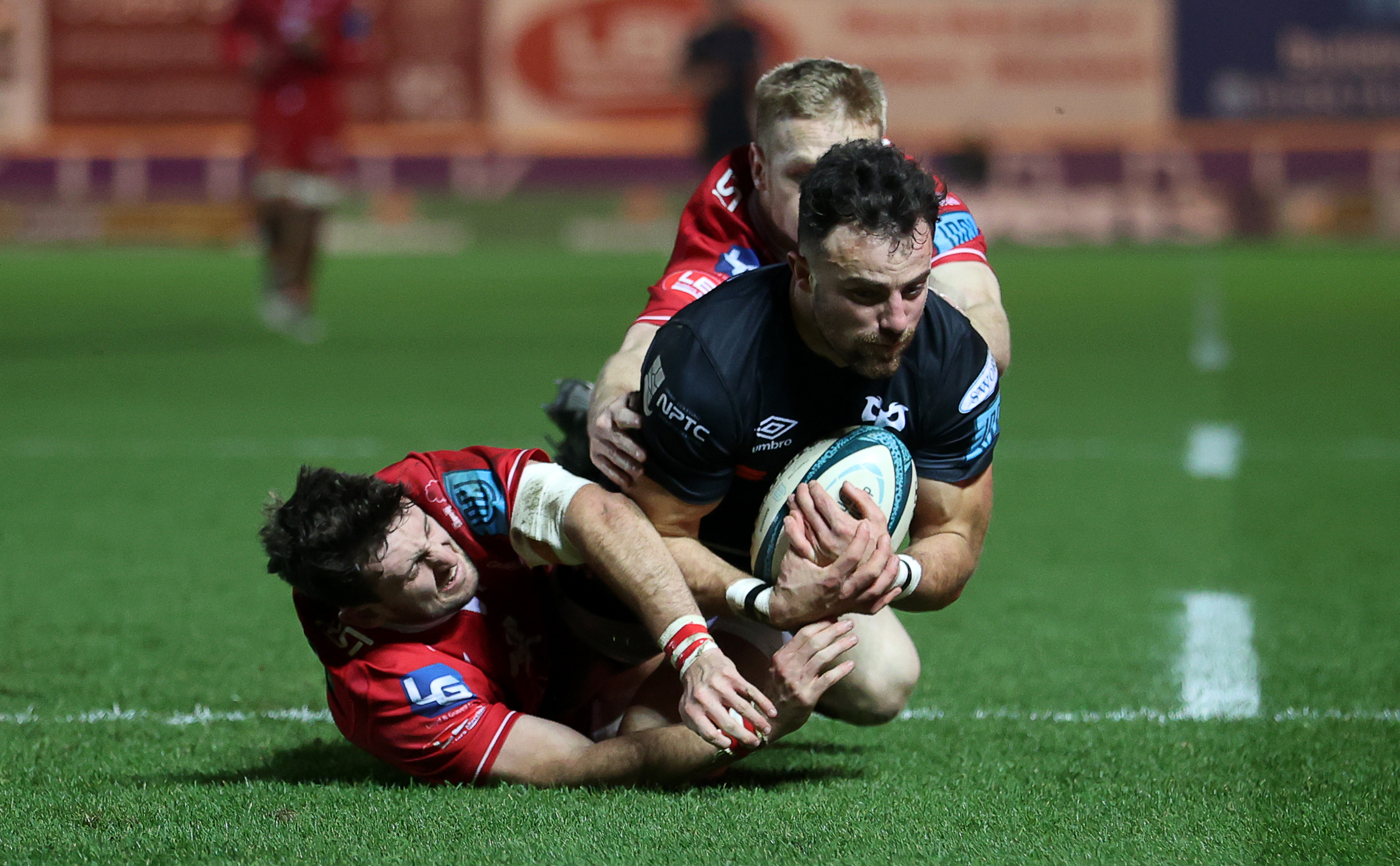 It was New Year heartbreak for the Ospreys as they narrowly lost a close battle against the Scarlets in Llanelli. With the latest Government guidelines in place following the outbreak of Coronavirus, the game was played behind closed doors at Parc Y Scarlets, and while the usual roar of the crowd was missing, the intensity and volume from the rugby staff in attendance echoed loud in the stadium.

The Scarlets took the game to the Ospreys early on through some clever kicking in open play. Both Scott Williams and Liam Williams securing territorial advantage with well-placed 50-22 kicks in the first 7 minutes. This eventually turned to points as Gareth Davies crossed the whitewash for the Scarlets opening try of the game. Dan Jones converting to make it 7-0 to the home side.

Momentum switched fairly quickly following the opening try as the Ospreys worked their way up the field capitalising off 3 Scarlets infringements. Fly-Half Josh Thomas opting to kick to the corner each time. It wasn’t long before the Ospreys crossed the try line from the subsequent kicks; Elvis Taione’s short lineout throw reaching Jac Morgan and the driving Ospreys pack – held up over the line on this occasion. The second lineout attempt did however go to plan for the Ospreys, some smart attacking phases off the lineout lead to Captain Rhys Webb touching down for the visitors. A trademark show-and-go try from Webb nearly ended in double trouble for the Scarlets with the TMO called in to check for foul play against Scarlet Second Row Tom Price. Price cleared off any wrongdoing this time as Josh Thomas secured the conversion shortly after.

On the 25th minute, the Ospreys were once again on the front foot as Dan Evans carved his way through the Scarlets defence and crossed the line… but to no avail! Scarlet’s Tom Price once again on the TMO’s screen but this time for a try saving tackle that saw the ball held up for the second time in quick succession.

As we reached the half hour mark, it was the Ospreys once again over the try line... and a second try on the board. Josh Thomas collecting a loose ball deep in his own half before spotting space behind the Scarlets defence. A well weighted kick deep into the Scarlets 22 resulted in a footrace to the ball between Ospreys’ Luke Morgan and Scarlet’s Johnny McNicholl – Morgan won the speed battle to collect the ball for the Ospreys 2nd try of the night. A missed conversion brought the score to 7-12 in favour of the Ospreys.

The Scarlets fought back hard. Another 50-22 kick from Liam Williams put the pressure on the Ospreys defence - Blade Thompson making a break towards the line beating a man in the tackle, with only one final offload needed before reaching the try line, the ball popped up for Rob Evans who fumbled the ball forward. A lucky escape this time for the Ospreys. With the contest fairly even in most assets of the game, there was one area that went firmly in the Ospreys favour during the first half. The scrum anchored by Nicky Smith and Tomas Francis drove the Scarlets back on several occasions with the penalty count mounting in favour of the men in Black. Continued pressure from the Scarlets ended in a handling error from Sam Lousi as the ball fell into touch for the conclusion of the half.

The second half didn’t start well for the Ospreys as a collection of infringements resulted in 3 penalty opportunities for the Scarlets. Dan Jones missing his first attempt on goal before opting for the corner at his second attempt shortly afterwards. The Ospreys did well to halt a rolling maul attempt for the line by the Scarlets pack before Gareth Davies made a burst down the blindside – a good defensive effort from Jac Morgan and Keelan Giles saw Davies pushed into touch keeping the score in the Ospreys favour.

The Scarlets hit back to make it all square on the scoreboard. Continued pressure on the Ospreys line eventually lead to an overlap – Steff Evans picking up the ball on the wing before touching down for the Scarlets second try of the evening. Rhys Patchell, brought on for Dan Jones at Fly-Half, missed the conversion.

The Ospreys dominance in the scrum was counteracted briefly with replacements off the Scarlets bench. Although they managed to swing scrum momentum into a more even contest, the new Prop pairing of Gareth Thomas and Tom Botha eventually brought it back for the Ospreys with another penalty going against the Scarlets pack. An error in mid-field from the Home side gave the Ospreys another penalty inside the opposition half. Quick thinking and a quick tap from Rhys Webb led to a brief break before Jac Morgan collected the offload to carry deep into the Scarlets 22. Dan Evans gained a significant amount of metres the following phase to reach the Scarlets try line. From the base of the ruck, it was that man Rhys Webb once again scoring for the Ospreys. Another trademark show-and-go saw the Ospreys captain take the score up to 12-19 with Josh Thomas converting.

A period of strong Ospreys possession was snuffed out twice in a matter of minutes thanks to 2 interceptions from the Scarlets back line. While the first interception allowed Steff Evans to boost his metres made tally, the second one proved more devastating – Kieran Hardy collected a rogue Ospreys pass to find Johnny McNicholl waiting on the wing… no contest in the speed battle this time as McNicholl ran clear to the try line. Scarlets score. It was maybe a night to forget for Rhys Patchell in the Scarlets shirt who’s kicking woes continued following another missed opportunity at goal. While Patchell hooked another penalty attempt wide at goal into the 70th minute, momentum shifted ever further into the Scarlets favour to see out the game. With the score at 17-19 to the Ospreys, 20+ phases of sustained West Walian attack saw another overlap appear for the Scarlets. McNicholl receiving a clear path to the line to dot down for this second try.

As the home side secured possession following the restart – Kieran Hardy kicked the ball into touch to end the game at 22-19 for the Scarlets. A close encounter in West Wales with both sides showing flair in attack. Ex-Osprey Scott Williams claimed the Star Of The Match award with special mentions given to Ospreys’ Rhys Webb and Jac Morgan who completed his night with 14 tackles to his name.