Leinster next for Ospreys

High flying Leinster will provide the next challenge for the Ospreys in a busy month when they visit the Liberty Stadium on Friday night (KO 7.45pm) as the PRO12 gets more competitive than ever.

Just nine points separate the Scarlets in first place and Glasgow in eighth after a busy Christmas period.

The Irish province moved into second place in the Guinness PRO12 on New Year’s Day, their 13-0 win over Connacht at the RDS providing a second festive derby win after they thumped Munster 24-7 at Thomond Park the previous weekend.

With a five match winning run putting the Ospreys firmly back in contention for a top six finish and just four points from the play-off spots, it’s set to be a cracking contest between two old rivals, with Leinster looking for a first PRO12 win in Swansea since 2009.

As always, your support can make a huge difference to the team so we look forward to seeing you at the Liberty for what promises to be another evening of drama and excitement.

Tickets are available to buy now at the Liberty Stadium Ticket Office, online at www.ospreysrugby.com/buytickets and via the Ticket Hotline on 0844 815 6665*, adult tickets starting at just £20 with kids from £5.

The following Friday sees a potentially huge European Rugby Champions Cup clash at the Liberty with the Ospreys, currently top of Pool 2, welcoming French giants Clermont Auvergne in Rounds 5. Tickets for that game are also on sale now.

*Please note calls to the above number are charged at 7p per minute plus standard network charges. 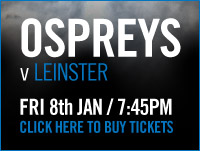