After Round 8 produced more thrilling rugby and a total of 44 tries, the Guinness PRO14 resumes this weekend with games taking place in Italy, Ireland, South Africa and Wales.

The race to reach the Guinness PRO14 Final in Dublin’s Aviva Stadium on May 26 is really starting to take shape with Glasgow Warriors in control of Conference A while defending champions Scarlets are just ahead of the chasing pack in Conference B.

Round 9 will see some new faces enter the Championship with Johann van Graan taking charge of his first game at Munster when they travel to Zebre while Edinburgh’s new signing Jaco van der Walt arrives just in time to join their touring party to his native South Africa. Meanwhile, Leinster will hope that former Crusaders star James Lowe can make an instant impact after his recent arrival in Dublin. 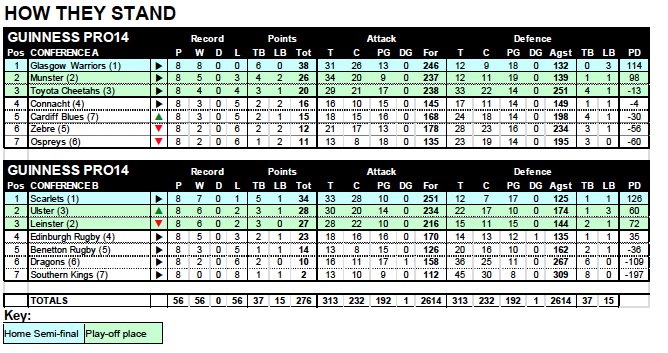 On Friday night Ulster take on Benetton in Conference B where the province will face a tough proposition at Kingspan Stadium as the hosts aim to stay hot on the heels of Scarlets. The Italians are in contention for the Champions Cup Play-Off position with Edinburgh, who will begin their tour to South Africa in Bloemfontein when they take on the Toyota Cheetahs – also on Friday night.

Friday’s other game see Cardiff Blues entertain Connacht, who are separated by just one point in Conference A, while in Conference B, Leinster welcome Bernard Jackman’s Dragons to the RDS. The 2014 champions are third in the table, seven points off leaders Scarlets, and victory in Dublin will be vital to stay in touch.

Like Edinburgh, Scarlets begin a two-game tour of South Africa this weekend with the Southern Kings first up. The Kings earned their first two Championship points of the season in their highly-entertaining fixture with Ulster in Round 8 where they came up just short in a 43-36 loss.

Glasgow Warriors will attempt to maintain their unbeaten start to the season when they travel to Ospreys on Sunday afternoon. It’s a case of top versus bottom in Conference A and although both teams have supplied a number of players to the Scottish and Welsh national teams during this current Test window, each club has a tremendous reputation for producing world-class talent and this game at Liberty Stadium will showcase their pedigree in this department.

Pick of the Round - Zebre v Munster Rugby

Eurosport and Sky Sports will broadcast live from Parma as three-time champions Munster face a potentially tricky trip to Zebre who have been showing signs of positive improvement this season. The Italian side feature consistently across the Opta Team Rankings released this week, sitting in the Top Five for Turnovers Won (52), Breaks (90), Offloads (103), Defenders Beaten (172) and Metres Gained (3,746).

For Munster, head coach Johann van Graan makes his first appearance in the coaches’ box since taking over from Rassie Erasmus. Munster are second in Conference A and if they are to keep in touch with Glasgow Warriors then they cannot afford to slip up in this game. Zebre have already beaten Ulster at the Stadio Lanfranchi this season but Munster travel having never lost to their Italian opponents, while their last Championship loss in Italy came back in 2013 to Benetton. 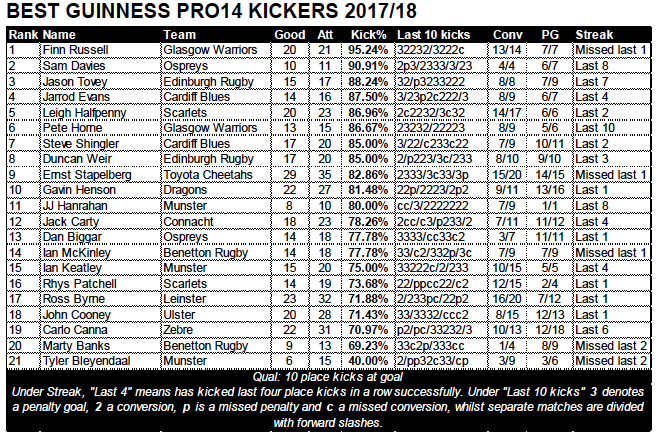