The Guinness PRO14 is back in action this weekend and brings with it a whole host of intriguing match- ups, cross-conference clashes and no shortage of attacking rugby.

Just a few weeks ago Niko Matawalu’s stunning hat-trick inspired Glasgow Warriors to a bonus-point away win at Ospreys while Leinster Rugby hit six tries in their victory on the road at the home of the Isuzu Southern Kings. 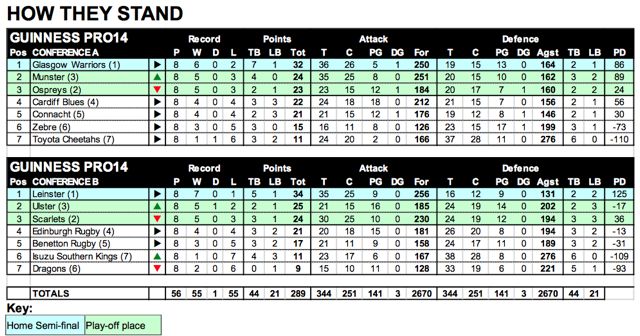 Round 9 kicks off on Friday night with a trio of mouth-watering clashes, one of which sees Glasgow (A1) welcome Cardiff Blues (A4) to Scotstoun in a Conference A clash (live on Free Sports 19.35).

These two sides haven’t met in the Championship yet in 2018, with the Warriors prevailing in both Guinness PRO14 clashes in 2017. The Blues are in strong form, losing just one of their last five Guinness PRO14 encounters (to Toyota Cheetahs in Round 7) and recording a bonus-point win last time out. That Round 8 victory saw an impressive 37-0 scoreline against Zebre at Cardiff Arms Park, Gethin Jenkins coming on for his final professional appearance and Rey Lee-Lo touching down for a double.

Over in Ireland at the same time Leinster (B1) host Ospreys (A3) at Dublin’s RDS Arena (live on Premier Sports 2, eir Sport 1 and TG4 19.35) with the Welsh region looking to continue their strong season start. Ospreys may have lost to Glasgow (29-20) in Round 8 but have five wins so far and have already beaten Leinster once in 2018 – a bonus-point win at the Liberty Stadium in March. Leinster though are on a roll, winning seven out of eight in the Guinness PRO14 and going over the 30-point mark in the last three rounds.

The only match to kick off on Saturday sees Benetton Rugby (B5) travel to South Africa to take on the Toyota Cheetahs (A7) in another intra-conference match-up (live on SuperSport 5 14.30 and FreeSportsand DAZN 12.30). Both of these sides fell to narrow defeats in Round 8, Benetton going down to Ulster 15-10 and the Cheetahs being pipped by Munster – 30-26. Hooker Joseph Dweba led from the front row against Munster, grabbing two tries, whilst Rabs Maxwane is the top Guinness PRO14 tryscorer with seven tries scored.

On Sunday lunchtime in South Africa the Isuzu Southern Kings (B6) host Connacht Rugby (A5) as both sides look to push their way up the Conference tables (live on SuperSport 1 15.00 and on Premier Sports 1 and eir Sport 2 13.00). The Kings go in search of their second win of the season while Connacht are looking for their fifth after a bonus-point victory over the Dragons in Round 8 (33-12).

Connacht did the damage with a six minute first-half salvo containing three tries, later wrapping things up with further scores for Tom McCartney and Thomas Farrell. The Irish province have won the only previous fixtures between the two sides (32-10 in September of last year) but were defeated by a single point on their only previous visit to South Africa by Cheetahs in Bloemfontein last March.

Munster (A2) currently trail Glasgow by eight points and will want to keep up the pressure when they travel to Zebre (A6) in what looks to be a testing away encounter (live on DAZN, Premier Sports 1 and eir Sport 1 15.30). Munster have won all 12 of their matches against the Italian side but Zebre are a team on the up and have only lost one of their last seven home games in all tournaments. They will look to the Round 7 34-16 victory over Edinburgh for inspiration while Munster are boosted by Mike Haley’s late try that sealed an impressive 30-26 win in Bloemfontein last time out.

The weekend is rounded off by Edinburgh Rugby’s (B4) trip to Dragons (B7) in what looks set to be an intense Conference B battle (live on S4C and Premier Sports 1 17.30). Dragons could lift themselves off the bottom of the table with a win and have been competitive at Rodney Parade, beating both the Kings and Zebre whilst conceding narrow defeats to Benetton and the Blues. In Round 8 Edinburgh sealed a five-try win, with Tom Brown and the irrepressible Bill Mata both grabbing doubles.

Pick of the Round – Scarlets v Ulster Rugby

On Friday evening Scarlets (B3) welcome Ulster (B2) to west Wales with just a point separating the sides in the Conference B table (live on Premier Sports 1 and eir Sport 2 19.35). These two teams have already met once this season – John Cooney’s last-minute kick clinching a thrilling victory at the Kingspan Stadium with a 15-13 scoreline.

The two sides are clearly well matched, with five Guinness PRO14 wins each so far, although Scarlets have a better points difference (36 to -17) despite being lower in the Conference table. Last time out Scarlets went down 31-21 at Edinburgh but Ulster won 15-10 on the road – second-half tries for Sean Reidy and Rob Herring getting them over the line.