There’s another exciting weekend of Guinness PRO14 action in store, including a top of the table clash at the Liberty Stadium.

The return of the Guinness PRO14 was marked by a number of eye-catching results and thrilling finishes, none more so than Rory Scannell’s match-winning penalty against Glasgow Warriors.

Elsewhere Dan Evans crossed in the final minute as the Ospreys edged Connacht while Zebre and Scarlets both overcame double-digit deficits to see off Edinburgh and the Isuzu Southern Kings respectively.

In Round 8 there is a pair of intriguing Welsh-Scottish match-ups on Friday night while the five intra-conference encounters this weekend could have a huge bearing on the final Guinness PRO14 Finals Series places. 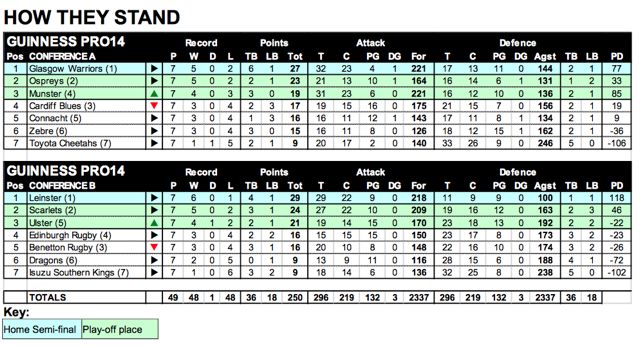 On Friday night the Ospreys (A2) host Glasgow Warriors (A1) at the Liberty Stadium (live on Premier Sports 2 and eir Sport 1 19.35 and SuperSport 1 21.35) in a game that could have huge ramifications in the race for a Final Series position. It was a tale of two finishes last weekend for the sides as the Ospreys snatched victory against Connacht in the final minute, while Glasgow were undone at the death by Munster. The Ospreys come into the game on the back of a nine-match winning streak at home in the Championship but their last Guinness PRO14 loss at the Liberty Stadium was at the hands of the Warriors. On that occasion the Warriors ran out 47-6 winners, their only win at the venue in the last four years.

On Saturday Benetton Rugby (B5) play host to Ulster (B3) at the Stadio Monigo (live on Premier Sports 1 and eir Sport 1 15.15 and DAZN 16.15) in a crucial Conference B clash. Ulster will head into the game with confidence following their victory over the Dragons last weekend, while Benetton struggled for both possession and territory in their defeat to Leinster. Ulster have certainly had the wood over Benetton in the past, with the Italians’ only victory in matches between the teams coming back in 2011. Both of last year’s encounters were tight, with Ulster sneaking a 23-22 victory at home, while they held on for a 21-14 win on their last trip to the Stadio Monigo, having raced into a 21-0 lead.

The second game on Saturday sees Connacht (A5) welcome the Dragons (B6) to the Sportsground (live on Premier Sports 1, S4C and TG4 17.15) with both teams losing on the road last weekend. Connacht have been very strong at home this season, with their only defeat coming at the hands of Leinster, while the Dragons are still searching for a first away win of the campaign in the Championship, although they were victorious on their travels in Europe. The Dragons were 21-8 winners at Rodney Parade in the only meeting between the sides last season.

Sunday’s action begins in South Africa when the Isuzu Southern Kings (B7) take on Leinster (B1) at Madibaz Stadium in Port Elizabeth (live on Premier Sports 1 and eir Sport 1 12.45 and SuperSport 1 14.45). The champions bounced back from European defeat to Toulouse with victory in Treviso last week and will look to strengthen their hold at the top of Conference B. The Kings, meanwhile, will be looking to bounce back after narrowly missing out on a second successive home win against the Scarlets last weekend. Both clashes at Madibaz Stadium so far have been high-scoring affairs with the Kings beating Glasgow Warriors before last Friday’s narrow loss Wayne Pivac’s side.

The action continues in Wales were the Cardiff Blues (A4) will be out for revenge against Zebre (A6) at the Cardiff Arms Park (live on Free Sports 14.45 and DAZN 15.45). When the two sides met earlier this season, it was the Blues who raced into a 21-0 lead only to see Zebre come from behind to win the game 26-24. Zebre have enjoyed some success against the Blues with their first-ever victory coming against the Welsh side, but they have not completed the double over the Blues since 2013/14. Two places and two points currently split the sides after seven rounds of action.

The second fixture of the weekend in South Africa sees a mouth-watering clash as Toyota Cheetahs (A7) entertain Munster (A3) in Bloemfontein (live on Premier Sports 2 and eir Sport 1 14.45 and SuperSport 1 16.45) in a clash between two of last year’s Final Series sides. Last year Munster edged a tight game in South Africa but they face a Cheetahs team who broke their duck last week with a comfortable win over the Cardiff Blues. Munster are now third in Conference A and can consolidate their position with victory against the Cheetahs. The two teams have already met once this season, with Munster victorious 38-0 at home.

Pick of the Round - Edinburgh v Scarlets

On Friday evening Edinburgh (B4) welcome conference high-flyers Scarlets (B2) to BT Murrayfield (live on Premier Sports 1 and eir Sport 2 19.35). Games between the sides have tended to go the way of the home team over the last six matches, with the Scarlets’ last win at BT Murrayfield coming in 2013. Richard Cockerill’s side have won six in a row at BT Murrayfield in all competitions, with their last loss coming to Ulster back in April. The game will also see Ben O’Keeffe become the third New Zealander to referee a game in the Championship. 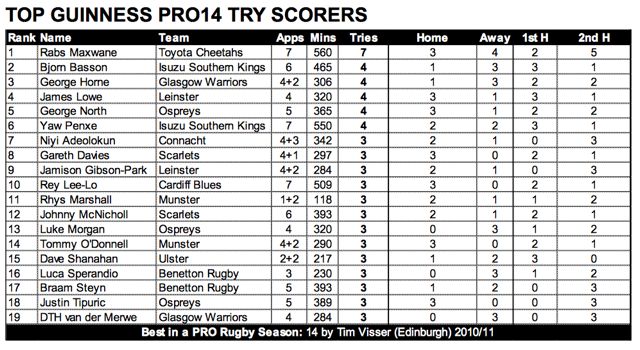 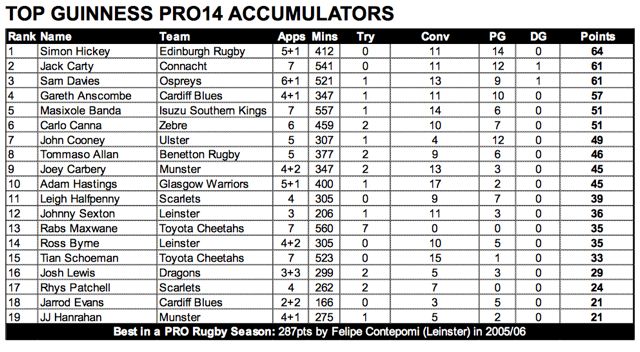 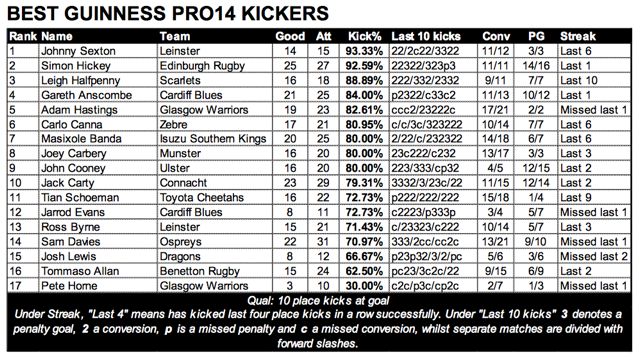