The Guinness PRO14 is back taking centre stage this weekend.

Two captivating rounds of European rugby are now done and dusted as the Guinness PRO14 flies back into view this weekend with a full schedule of games.

Rounds 5 and 6 featured the first derby matches of the season and we’re now into the second ‘block’ of games, with the plot thickening in both Conferences.

Perhaps the result of Round 6 saw Connacht win away at Ulster for the first time since 1960, while the much-anticipated clash between Leinster and Munster saw Leo Cullen’s men edge things 30-22.

Can Connacht win away again in Round 7? They travel to Ospreys in an intriguing match-up, while Munster and Glasgow Warriors meet at Thomond Park in a Saturday tea-time blockbuster. 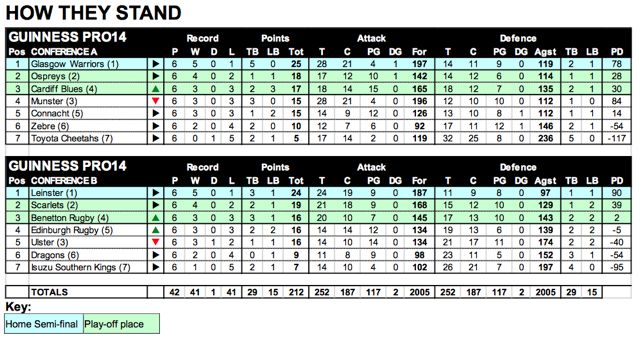 If you have been missing the Guinness PRO14 action in recent weeks then Friday night brings the perfect remedy in the shape of four evening fixtures.

The first of these sees the Isuzu Southern Kings (B7) host Scarlets (B2) at Madibaz Stadium in Port Elizabeth (live on Premier Sports 2, eir Sport 18.00, SuperSport 1, 19.00). The two sides have already met once this season, with Scarlets running out 54-14 winners at Parc y Scarlets, while last year they played out a thriller at the Nelson Mandela Bay Stadium as the west Walians edged things 34-30. Last time out Wayne Pivac’s men had to battle to a 20-17 victory over Ospreys in a Welsh derby and the Kings were defeated 28- 5 at Benetton Rugby. The South Africans’ latest home fixture though was a 38-28 victory over Glasgow, and they’ll be keen to resurrect that form once again.

An hour later on Friday Zebre (A6) host Edinburgh Rugby (B4) at the Stadio Sergio Lanfranchi (live on DAZN and Freesports 19.00). The match-up between these two sides looks to be a competitive one, with Edinburgh’s overall record in Parma seeing them win three but lose two. Last time out in the Guinness PRO14 Edinburgh defeated the Toyota Cheetahs 37-21, but since then Richard Cockerill’s men came a whisker short of beating Montpellier in France and then hit top gear against Toulon in Scotland. Zebre have their own European successes to build on, beating Bristol in the Challenge Cup last week, and have also defeated both the Kings and Cardiff Blues in Parma this season.

Less than 60 minutes later on Friday Ulster Rugby (B5) host Dragons Rugby (B6) at Kingspan Stadium (live on Premier Sports 1 and eir Sport 2 19.55). Ulster sit just above Dragons in Conference B and the two sides face off in what looks a difficult game to predict. After winning their first three Guinness PRO14 fixtures Ulster are without a win in three, but did impress in Round 1 of the Champions Cup against Leicester Tigers a few weeks ago. Meanwhile Dragons look to be improving week to week and since beating Zebre 16-5 in Round 4 have looked increasingly cohesive, their 54-17 Challenge Cup rout of Timisoara Saracens won’t have done the club any damage.

The fourth Friday night kick-off sees Connacht (A5) travel to take on Ospreys (A2) (live on Premier Sports 2 and TG4 18.00). Instead of taking place at the Liberty Stadium this fixture is moved to Bridgend and Morganstone Brewery Field, the first Championship match to be hosted at the venue since Celtic Warriors beat Cardiff Blues there on 7 May 2004. Ospreys are three places higher in the Conference A table but also only three points to the better and Connacht will be desperate to get one over a conference rival, with a leapfrogging possible. The Galway- based side have the perfect template for victory on Friday with their away win at Ulster in Round 6, but Ospreys have won four Guinness PRO14 games already this season and represent stern opposition.

Leinster (B1) are on their travels on Saturday as they visit Benetton’s (B3) Stadio Mongio (live on DAZN, eir Sport 1 and Premier Sports 1 15.00). The match features two of the Guinness PRO14’s in-form sides as Benetton go in search of a fourth win of their campaign. Until recently Leinster could claim an incredible record against the Italian outfit, winning 29 games straight, but Benetton displayed their rapid improvements in April by beating the soon-to- be Guinness PRO14 champions 17-15 at the RDS. Both of these sides are also coming off the back of Guinness PRO14 victories, with Benetton beating the Kings 28-5 and Leinster downing Munster in Round 6.

The final fixture of the weekend sees a mouth-watering clash as Cardiff Blues (A3) travel to take on the Cheetahs (A7) in South Africa (live on Premier Sports 2, S4C 18.15 and SuperSport 19.15) in a repeat of one of the best games of last season. That April match at Toyota Stadium saw the Cheetahs triumph over the Blues 29-27 in a breath-taking, end-to-end game of rugby – these two sides also battled things out in Round 5 with the Blues prevailing 24-21. Owen Lane was the hero last time out for the Cardiff-based side, scoring two tries to help win at Rodney Parade, but the Cheetahs came very close to beating the Blues in that Round 5 encounter and will fancy their chances on home turf.

Pick of the Round - Munster v Glasgow Warriors

Many will be looking forward to Munster’s (A4) match-up with Glasgow Warriors (A1) on Saturday (live on Premier Sports 1, eir Sport 1, 17.15) – the 2000th game in the Championship. Just as they did last season, Glasgow have started their Guinness PRO14 campaign on fire, winning five from six to top Conference A and with a big win over Zebre last time out. Dave Rennie’s men were also in good Champions Cup form at the weekend, downing Cardiff Blues 29-12 in Wales, and won’t be daunted by a trip to Thomond Park. Munster are also coming off the back of Champions Cup success, beating Gloucester on Saturday, and have racked up an impressive 151 points at Thomond Park already this season in the Guinness PRO14 – tries will surely ensue. 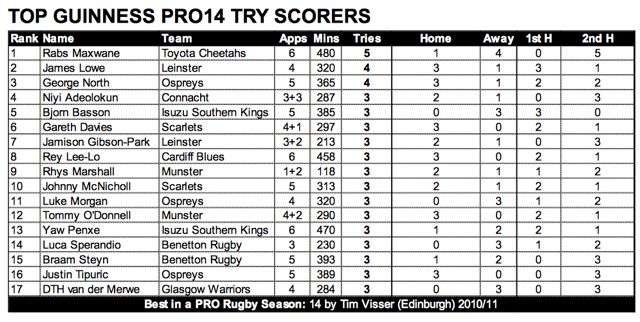 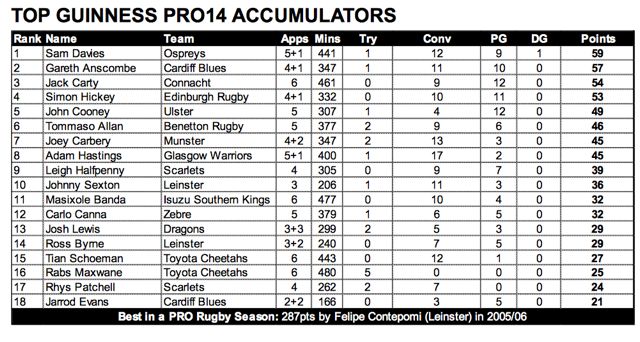 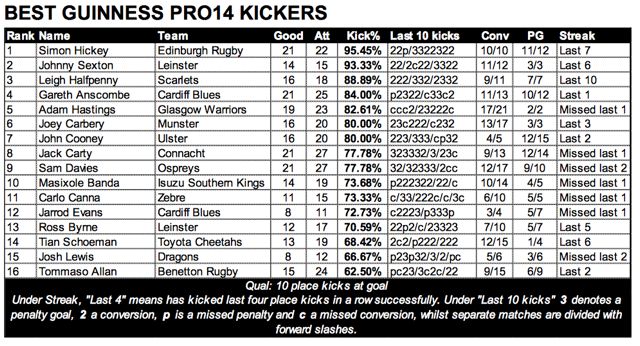