We look ahead to another exciting weekend of Guinness PRO14 action.

A cracking weekend of rugby awaits in the Guinness PRO14 with derby games taking place in Ireland and Wales while Italy, Scotland and South Africa all host intriguing matches.

The unpredictable nature of the Championship is clear to see with Zebre’s win over Ulster highlighting the improved efforts from the Italian clubs while the Toyota Cheetahs continue to look like an imposing force on their home turf in Bloemfontein after their win over Ospreys.

Bonus points are up across the board with 32 scored after five rounds compared to 20 at this point last season, while the average number of tries has risen from 4.9 per game to 5.5 ensuring that fans all across the Guinness PRO14 are getting plenty of entertainment.

One of the most exciting fixtures in Round 6 appears to be Glasgow Warriors trip to Bloemfontein where they will put their unbeaten record to the test against the South Africans, who have claimed three successive bonus-point wins. The Cheetahs have not won four in a row since 2013 while the Warriors are the only unbeaten team in the tournament, so this promises to be an enthralling affair.

Ospreys are in need of a win to get their season back on track and in Scarlets they face their closest rivals and the defending champions. Scarlets are off to a hot start and this derby duel should bring out the best of both teams who have won three games each in their last six fixtures against each other.

The other Welsh derby takes place in the capital where Cardiff Blues face a Dragons team which is showing signs of rejuvenation under Bernard Jackman, but their last win over a fellow Welsh region came against Blues in 2014.

Zebre will visit Myreside to take on Edinburgh hoping to repeat the heroics of Benetton Rugby who won there just two weeks ago, however, history is against the visitors who are yet to win three Championship games in a row.

Benetton will also host the Southern Kings and Italy will become the sixth country they have played in during 2017 – Singapore, Australia, Argentina, Wales and Ireland are the others.

At Kingspan Stadium, Connacht go in search of a win to arrest their form but they will come up against an Ulster team eager to bounce back from last weekend’s loss and armed with a record of nine wins from their last 10 fixtures against the westerners.

Aviva Stadium, the location of the 2018 Guinness PRO14 Final, will host Leinster v Munster as both teams enter the game sitting second in their respective conferences on 19 points having both won four of their five fixtures. The hosts have won their last four in a row at Aviva while Munster have only a single victory (34-23 v Leinster, 2014) to show from their last 10 visits to the Dublin venue, but those figures will only add to the motivation for the men in red. 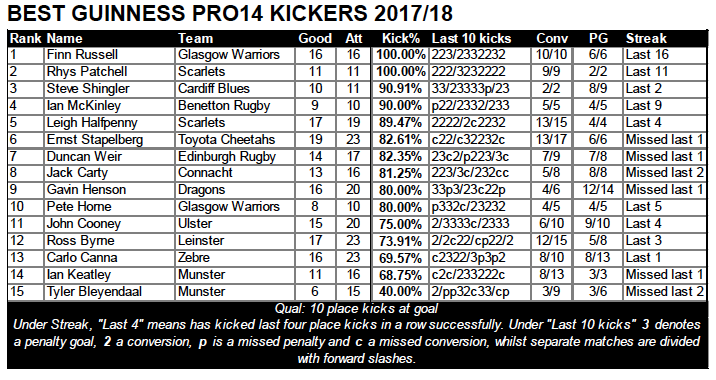