All you need to know about the coming weekend's action with derby clashes in Wales and Ireland.

Round 5 of the Guinness PRO14 brought the first set of derby matches this season and, as ever, we were not left disappointed on another weekend of thrilling rugby.

Munster sent out a statement of intent with a comfortable home win against Ulster, while Leinster edged out a determined Connacht – and the two winners meet this weekend at Aviva Stadium in one of the most highly-anticipated matches of the season.

Round 6 has it all. Fierce rivalries across the Championship, fascinating match-ups and the guarantee of tries to end the first section of Championship matches before the teams prepare for European competition next week.

We may be just a few weeks into the campaign but every team has hopes on reaching the Guinness PRO14 Final on May 25 which will take place at Celtic Park – fans can book their places now by visiting bitly.com/Glasgow2019 to get their hands on the best seats available. 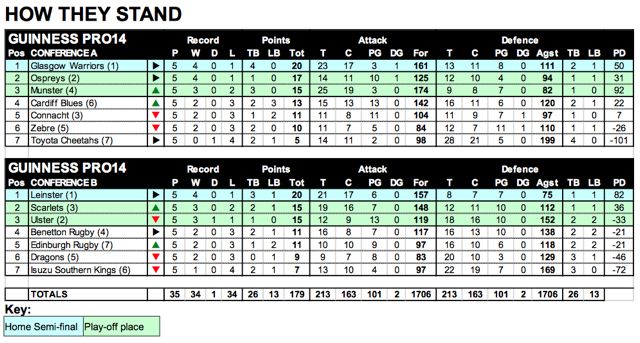 The action begins on Friday night with a triple-header, the first of which sees the Edinburgh (B5) welcome Toyota Cheetahs (A7) to BT Murrayfield (live on Premier Sports 1, Free Sport 19:35 & SuperSport 1, 20:35). Having won just one of their first four games at the start of the new campaign, Richard Cockerill’s side got back on track with a 31-30 victory over Benetton Rugby after holding off a second-half fightback from the Italians.

Simon Hickey’s accuracy from the tee ultimately proved vital, kicking a penalty and all four conversions, while Benetton missed four conversions. Meanwhile, Cheetahs fell agonisingly short of their first win against Cardiff Blues in an equally tight game, after Sibahle Maxwane and Benhard Janse van Rensburg had put them ahead. The two sides have only met once before, with Cheetahs defeating Edinburgh 33-13 in Bloemfontein last season.

The second match on Friday sees Zebre (A6) clash with Glasgow Warriors (A1) at Scotstoun Stadium (live on Premier Sports 2, 19:35). The hosts have only suffered one defeat in the first five rounds of the Guinness PRO14, bouncing back from their shock defeat against Isuzu Southern Kings to dispatch Dragons 29-13 last time out.

Oli Kebble was the star man for Warriors, who have won their last 25 matches against Italian opponents. Zebre have just one win from their last four matches, slipping to a 22-8 defeat to Ospreys in Round 5, and the odds are stacked against them on Friday. Dave Rennie’s outfit have won all 12 previous encounters between the two side, including two dominant victories last season (Warriors winning 68-7 at home and 40-20 at Stadio Sergio Lanfranchi).

An action-packed Friday night schedule will also see Connacht (A5) travel to the Kingspan Stadium to face Ulster (B3) in search of their first victory in Belfast since November 1960 (live on eir Sport 1 19:00 & Premier Sports 1, 19:35).

Despite a promising start to the season, which included three wins and a draw, the hosts were subjected to their biggest ever defeat in Munster last weekend. Dan McFarland’s troops will be desperate to get back to winning ways against a Connacht side that pushed Guinness PRO14 champions Leinster all the way in Round 5. A high penalty count cost them dearly, though, and their record away from home in inter-pro games does not inspire confidence, with just one win away from Galway in the Championship since April 2017.

Saturday’s opening fixture sees Scarlets (B2) welcome Ospreys (A2) to Parc y Scarlets (live on Premier Sports 1 & eir sport 1, 15:00) in a battle between two in-form sides. Last season’s Guinness PRO14 Finalists Scarlets have won three of five games this term to sit second in Conference B – with their defeats coming away to Connacht and Ulster.

Ospreys’ only defeat this season was a 49-13 reverse to Munster in Round 3 and they head to Llanelli off the back of 22-8 triumph over Zebre in Parma. Scarlets have a formidable record as hosts – being unbeaten in their last 24 Guinness PRO14 home games – and have also won their last nine fixtures against fellow Welsh regions in the Championship.

The other Welsh regional clash on Saturday sees Dragons (B6) on the hunt for a third win in six games as they play host to Cardiff Blues (A4) at Rodney Parade (live on Premier Sports 1 & eir sport 2 17:15). The Blues have the same two win-three loss record as their hosts but the five bonus points tallied in their opening fixtures mean they lie fourth in Conference A on 13 points. The Blues boast the joint-most turnovers in the Guinness PRO14 this season, Ellis Jenkins (8) in their ranks, while no-one has made more metres than Dragons flyer Jordan Williams’ 425.

After three consecutive defeats by two points or less to open the season, Blue are now protecting a two-game winning streak, while Dragons are seeking to finally end a 21-match losing run against fellow Welsh regions in the Championship.

The final game of the weekend is an intriguing Saturday evening clash between Benetton (B4) and Isuzu Southern Kings (B7) at Stadio Monigo (live on DAZN, Super Sport 1 20:00 & Free Sports, 19:00). The Italian side are looking to bounce back from a heart-wrenching loss to Edinburgh Rugby last time out, where Luca Sperandio’s spectacular hat-trick wasn’t enough to stop them falling to a 31-30 defeat. They have slipped to three straight losses in the Guinness PRO14 – their worst run since last December – but have won all three previous games against South African opponents, while the Kings are still seeking their first-ever away victory in the competition

Pick of the Round - Leinster v Munster

Conference B leaders Leinster (B1) welcome Munster (A3) to the Aviva Stadium on Saturday (live on eir sport 1 & Premier Sports 2, 18:00), looking to make it five wins from six this season. Both teams are coming off inter-pro wins in Round 5, although they couldn’t have been more contrasting, as Leinster edged a low-scoring affair with Connacht 20-3 while Munster ran in nine tries to overwhelm Ulster 64-7. The Leinstermen have won their last nine matches at Aviva Stadium in all tournaments, since Toulon beat them there in December 2015, while Munster have only won once in the last seven fixtures between the sides. 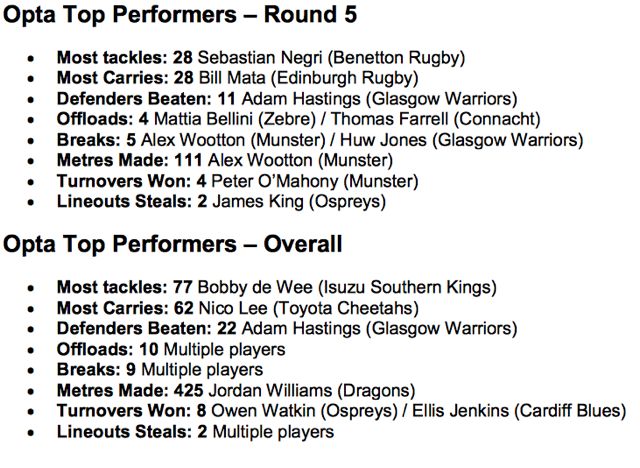 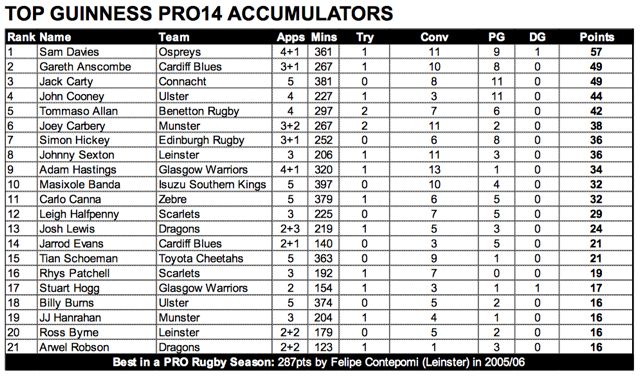 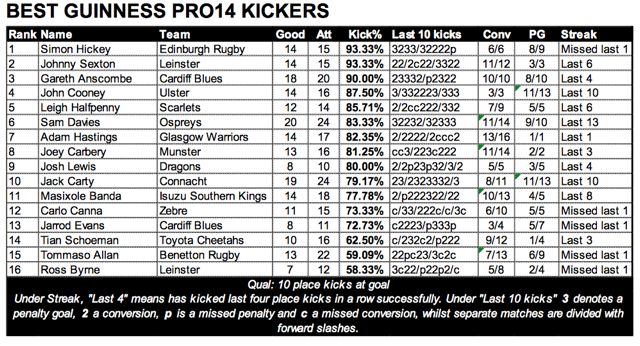