The 2017/18 Guinness PRO14 season set new attacking records, with 861 tries scored, but with a scintillating Round 4 this year now under out belts new heights are being reached in the Championship.

In the first 28 games of the season 168 tries have now been scored - the first time that the running average for a season has ever hit six tries per game in the entire history of the Championship.

Ulster Rugby’s draw with the Toyota Cheetahs and the Southern Kings’ victory over Glasgow Warriors mean’s there are no more unbeaten sides in the competition, whilst Cardiff Blues’ resounding 37-13 victory over Munster Rugby was one of the most eye-catching results of the round. Round 5 brings with it a whole host of fascinating fixtures including the season’s first derby matches which take place in Ireland. 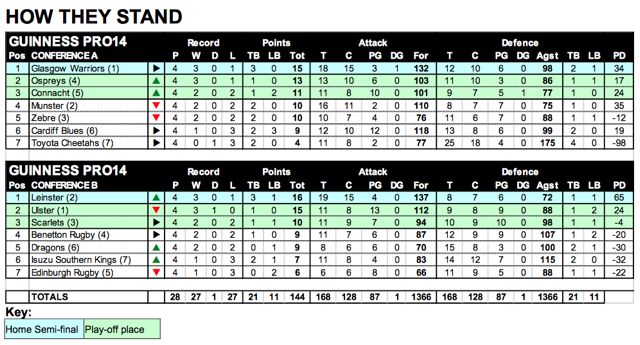 The action begins on Friday night with a double helping of games, the first of which sees the Toyota Cheetahs (A7) travel to the Welsh capital to take on the Cardiff Blues (A6) at Cardiff Arms Park (live on Premier Sports 1, eir sport 2, 19:35 & SuperSport 1, 20:35).

After finishing last season in hugely impressive fashion the Blues would have hoped for a better start to this campaign, falling to three straight defeats, but got their September flying last week with that big win over Munster. Similarly to the Blues, the Cheetahs also ended a run of defeats but could only draw against Ulster – a 39-39 scoreline that thrilled the onlooking crowds. These two sides played out a pair of crackers last season (Blues won 25-20 in Cardiff, the Cheetahs won 29-27 in Bloemfontein).

Richard Cockerill’s men have one win from their first four but have faced a tough schedule, as exemplified by their trip to champions Leinster at the weekend, with the Irish province running out 31-7 winners. Edinburgh though have been competitive in all their games this season and can look to their Round 3 win over Connacht for inspiration. Edinburgh’s opponents on Friday, Benetton, may have lost at Ospreys on Saturday (27-10) but have already beaten Dragons and the Blues this season, and also beat Edinburgh in dramatic fashion at Myreside last September.

The first of five fixtures on Saturday takes place at Stadio Sergio Lanfranchi where Zebre (A5) will take on Ospreys (A2) (live on DAZN, Premier Sports 1 & eir sport 2, 15:00).

The Italian side have had an excellent start to their 2018/19 campaign, beating the Southern Kings in Round 1 and Cardiff Blues in Round 3, with Oliviero Fabiani and Mattia Bellini both registering with two tries so far. Zebre have won their last four home matches and their last three home games against Welsh opponents. The Ospreys, meanwhile, have also started strongly and are second in Conference A with three wins out of four.

Last season’s Guinness PRO14 finalists set high standards but have faced tough opponents, losing to Connacht and Ulster but beating Leinster and Benetton. Last time out was the 33-20 defeat to Connacht at the Sportsground and the Irish province were superb on the day, but Johnny McNicholl scored an excellent try for Scarlets.

Meanwhile, the Kings enjoyed a dream Round 4 as they grabbed their first win by beating previously undefeated Glasgow Warriors 38-28 in South Africa. The Kings were magnificent on the day, with Harlon Klaasen’s try, set up by midfield partner and namesake Berton Klaasen, a score of beauty.

In one of the later kick-offs on Saturday, Glasgow Warriors (A1) play host to Dragons (B5) at Scotstoun (live on Freesports, 19:35) and looking to bounce back from their defeat to the Kings. As was the case last season, Glasgow have started extremely well, picking up three wins to top their conference after four matches. A double for DTH van der Merwe helped the Warriors to a losing bonus point in South Africa whilst man of the moment – fly-half Adam Hastings – could return against Dragons. The Welsh region will be tough opponents and look to be picking up steam. They beat Zebre 16-5 in Round 4 and possess the top tackler in the Championship – skipper Cory Hill has made 49 without missing one – whilst Ross Moriarty made 19 on his own against Zebre.

The Irish inter-pros get underway this weekend as Munster (A4) welcome Ulster (B2) to Thomond Park (live on eir sport 1 & Premier Sports 1, 19:35) looking for a third win at home this season. Johann van Graan’s side were beaten in Cardiff last time out, but have taken a maximum ten points from their two games at home so far this season.

Ulster are the only remaining unbeaten team this season, although they failed to win for the first time last week in a draw in Bloemfontein. Ulster’s last win at Thomond Park came back in May 2014.

Pick of the Round - Connacht v Leinster

Conference B leaders Leinster (B1) travel to Connacht (A3) on Saturday (live on eir sport 1, TG4 & Premier Sport 1, 17:15) looking to make it four wins from five this season. Connacht picked up an impressive victory over the Scarlets at the Sportsground and will look to complete the double over last year’s Guinness PRO14 finalists. Connacht won all three of their clashes with Irish opposition at home including against Leinster, the champions’ only defeat to Irish opposition last season. 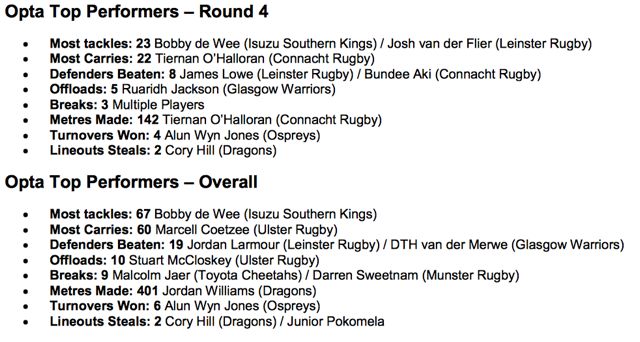