There’s another big weekend of Guinness PRO14 action coming up – check out our handy guide to the action.

Round 3 of the Guinness PRO14 was a record-breaking affair with a remarkable 51 tries across the seven matches at an average of more than seven a game.

Glasgow Warriors and Ulster are now the only remaining unbeaten sides in the competition, while arguably the most impressive performance was Zebre coming from 21-0 down to beat Cardiff Blues in dramatic fashion in Parma.

Round 4 will see the unbeaten pair of Glasgow and Ulster away in South Africa, while Munster travel to Cardiff Blues in a potentially exciting game on Friday night.

The season may still be in its early stages but all sides will have their hopes on reaching the Guinness PRO14 Final on May 25 which will take place at Celtic Park – fans can book their places now by visiting bitly.com/Glasgow2019. 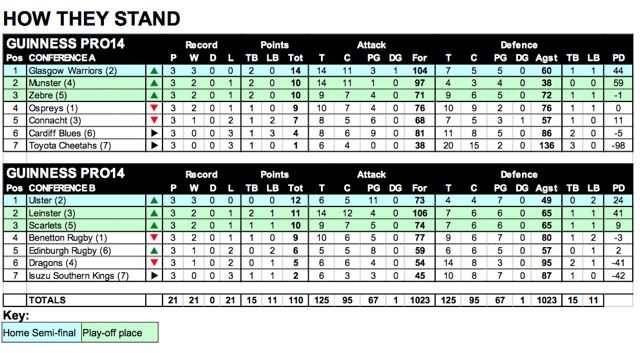 The action begins on Friday evening in Bloemfontein when Ulster (B1) travel to take on the Toyota Cheetahs (A7) at Toyota Stadium (live on Premier Sports 2, 18:15, & SuperSport 1, 19:15). Following last week’s victory over the Isuzu Southern Kings, Ulster are now three from three in the competition and looking good under new director of rugby Dan McFarland.

John Cooney was the star of their first two victories before a more comfortable win in Port Elizabeth and they will be keen to finish their South African trip on a high in Bloemfontein. The Cheetahs come into the game off the back of a high-scoring loss to Glasgow Warriors. While they started very well, the five second-half tries conceded will be a concern and something Franco Smith’s team cannot afford a repeat of in this fixture.

The second match on Friday sees the Cardiff Blues (A6) host Munster (A2) at Cardiff Arms Park (live on Premier Sports 1, eir sport 2 & TG4, 19:35). The Blues are still searching for a first win of the season but they will wonder how they have not yet managed it, with a points difference of just -5 across those three losses.

The last one will have hurt the most, letting a 21-0 lead slip to Zebre and they will be keen to put things right at home to Munster. While Munster have won on four of their last six visits to the Arms Park, they were beaten there last season.

On Saturday a new stadium will be used in Port Elizabeth when the Isuzu Southern Kings (B7) play host to Glasgow Warriors (A1) in Nelson Mandela University Stadium (live on Free Sports, eir sport 1, 14:00, & SuperSport 1, 15:00). The Kings are yet to be pick up a win this season, losing their first home encounter of the season last time out against Ulster.

The Warriors, meanwhile, are three from three, including wins on the road against Connacht and the Cheetahs as they start the season on a winning run for the second straight year. The Warriors won the only previous meeting of the sides last October in Scotstoun.

Connacht (A5) entertain the Scarlets (B3) at the Sportsground (live on TG4 & Premier Sports 1, 17:15) looking to get back to winning ways. Andy Friend’s side had to settle for a losing bonus point away in Edinburgh last week, while the Scarlets won a thriller against Benetton. Wayne Pivac’s team have now won two straight games at home, but they were beaten on the road at Ulster on the opening weekend. Connacht, meanwhile, will be looking to end a run of three straight losses to the West Walians since a win at the Sportsground in January 2016.

The action continues on Saturday at Rodney Parade where the Dragons (B6) play host to Zebre (B3) (live on Premier Sports 2, S4C, 17:15, & DAZN, 18:15). Zebre have won two from three to start the season but have only ever won one match in Wales, against Cardiff Blues back in 2013. They have won three of their last four games against the Dragons, with a bonus point on each occasion, but all of those have come at home. The Dragons return to Rodney Parade where they won against the Kings in Round 2.

The early pacesetters face one another as Ospreys (A4) host Benetton Rugby (B4) (live on Premier Sports 1, eir sport 2, 19:35, & DAZN, 20:35). Both teams won their first two games before losing last weekend. For the Ospreys, that was a heavy defeat in Munster, while Benetton were on the wrong end of a ten-try classic away to the Scarlets, an impressive effort considering they played more than 50 minutes with 14 men.

Pick of the Round - Leinster v Edinburgh

Leinster bounced back from defeat to the Scarlets with a thumping win over the Dragons and are up to second in Conference B. They host an Edinburgh side who won their first game of the campaign at home to Connacht last week after near misses in Rounds 1 and 2. They face a tall order winning in Dublin though, Glasgow Warriors, in 2011, are the only Scottish side to have previously come away with a win at the RDS. 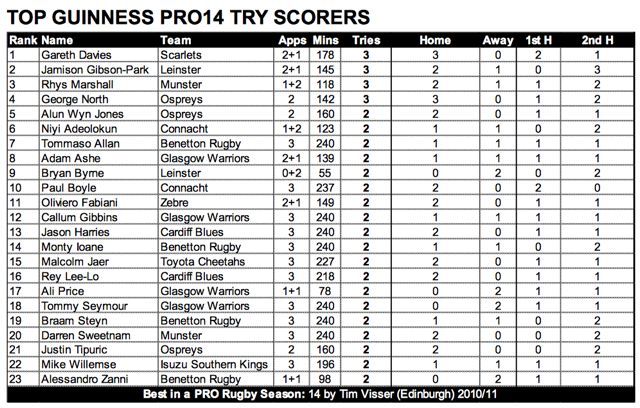