Rugby did all the talking on the opening weekend of the Guinness PRO14 with expansive rugby and nail-biting finishes on offer in equal measure.

In all 10 bonus points were won – a tally that equals the record for most in a round – while Round 1 saw wins for both Italian teams, Benetton Rugby and Zebre, in the season opener for the first time.

Fans in Cardiff, Galway and Belfast were treated to results that went right to the wire as every game was broadcast live in the UK by Premier Sports with eir sport (Republic of Ireland) and DAZN (Italy) also making their debuts.

Round 2 will have a lot to live up to but with a host of mouth-watering fixtures the Guinness PRO14 will be up to the test with Glasgow Warriors hosting Munster, Scarlets welcoming Leinster to West Wales and Ulster facing Edinburgh just some of this weekend’s headline fixtures.

The season may only be beginning but all sides will have their hopes on reaching the Guinness PRO14 Final on May 25 which will take place at Celtic Park in Glasgow – the first time the showpiece decider will be played outside of a rugby venue. However, fans can book their places now by visiting bitly.com/Glasgow2019 to get their hands on the best seats available.

On Friday night Munster (A1) take on Glasgow Warriors (A3) at Scotstoun (live on Premier Sports 2 & eir sport 1, 19:35) in a game that will have lasting consequences in Conference A come the end of the season with both of these former champions eager to make another title run. Munster hold a good record over Warriors, but Dave Rennie’s team are formidable at home having won all fixtures last year in the regular season at Scotstoun failing just once to collect a try-scoring Bonus Point.

Pipped to the Guinness PRO14 Final Series by this weekend’s opponents, Ulster (B3) will host Edinburgh (B6) (live on Premier Sports 1 & eir sport 2, 19:35) aiming to build on their opening win over Scarlets. Back-to-back victories would be a great way to start the new era under Dan McFarland, but Richard Cockerill’s team will be fully focused for this Conference B clash. Ulster have won their last six games at Kingspan Stadium, but Edinburgh will be buoyed by their two wins on Irish soil last season against Connacht and Ulster.

On Saturday Dragons (B5) will be out to make amends against the Isuzu Southern Kings (B7) (live on Premier Sports 1 & eir sport 1, 15:00) for their opening round defeat to Benetton. The Kings, however, will be buoyed by their performance in the loss to Zebre and having already beaten Dragons in Port Elizabeth may sense an opportunity to win their first away game in the Guinness PRO14 but the hosts will ensure that is not the case.

Galway plays host as Connacht (A6) take on Zebre (A2) (live on Premier Sports 2, TG4 17:15 & DAZN 18:15). Coach Michael Bradley returns to his former stomping ground having instilled a free-flowing attacking game at Zebre who have won their previous three encounters with the Westerners and their last four Guinness PRO14 games. Connacht, however, are looking to right the ship and showed plenty of encouraging signs under new head coach Andy Friend in their narrow defeat to Glasgow Warriors last weekend.

Ospreys (A4) will look to build on their win over Edinburgh by seeing off the Toyota Cheetahs (A7) (live on Premier Sports 1 & eir sport 2, 17:30) who need to regroup quickly after a heavy defeat to Munster. George North racked up two tries on his debut for Ospreys last weekend and he and his new region will want to continue that vein of form in order to put the disappointment of last season behind them. Click here now to get your tickets.

If Benetton Rugby (B2) can get a positive result against Cardiff Blues (A5) here in Treviso (live on DAZN, 20:35 & Free Sports, 19:35) then the Stadio Monigo will continue to regain its former position as one of the toughest tasks on the fixture list. In Benetton’s opening season in the Championship they were robust at home and if they can emulate that it would go some way to their challenge of reaching the Guinness PRO14 Final Series. However, the Blues showed plenty of attacking intent against Leinster and harbour their own end-of-season ambitions.

Pick of the Round Scarlets v Leinster

For the second weekend in a row defending champions Leinster (B1) make the trip to Wales, this time to face Scarlets (B4) in Llanelli (live on Premier Sports 1, eir sport 1, 19:35). These teams met in last season’s final and are the most recent champions of the Guinness PRO14 and during that time they have built up a tasty rivalry. Scarlets’ recent form against the Irish provinces has not been profitable, however, Leinster have not won at Parc y Scarlets since 2013 and can expect to face fired-up home team eager to make up for last weekend’s loss away to Ulster. 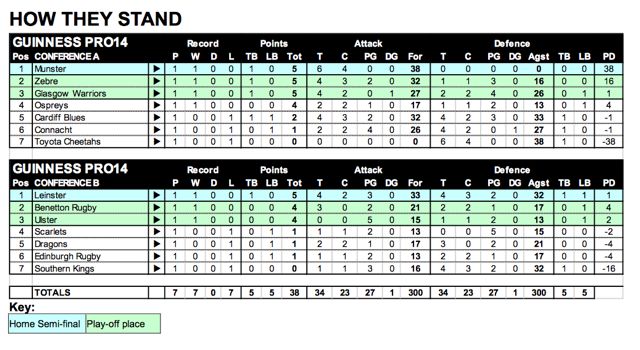