Here's all the detail ahead of another huge weekend of Guinness PRO14 action.

After a terrific round of European action that saw three Guinness PRO14 teams reach the Champions Cup Semi-Finals, the focus returns to the Championship as 11 sides compete for Final Series and European Play-Off places.

Munster and Cardiff Blues travel to South Africa with so much still to be decided in Conference A and their fixtures with the Toyota Cheetahs will be crucial for all three sides. In Conference B, Edinburgh are looking to see off Ulster to earn their place in the Final Series and possibly leapfrog Scarlets in the process. The final stretch of the season has never promised so much and all of these teams have their minds set on reaching the Guinness PRO14 Final at Dublin’s Aviva Stadium on May 26 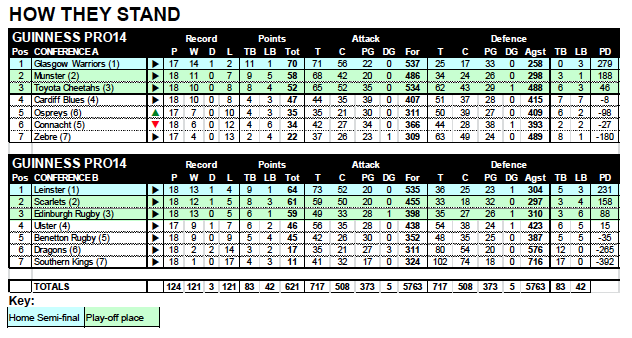 Ospreys (A5) go up against Connacht (A6) at Liberty Stadium (KO 19.35, S4C) where a win would give Ospreys a vital advantage in their battle with the Irish side to reach the Champions Cup Play-Off. Ospreys have a one-point lead over Connacht, but with a game in a hand a win here should prove pivotal to their Champions Cup hopes.

On Saturday Leinster (B1) face Zebre (A7) at the RDS Arena (KO 14:00, TG4) where a win will guarantee them a place in the Final Series and help in their bid to earn a home Semi-Final. The Italians come to Dublin searching for a fifth win of the season which would equal their best-ever return in the Championship.

There’s a cracker in store in Bloemfontein (KO 15:00 SA / 14:00 UK, SuperSport / S4C) with Toyota Cheetahs (A3) facing Cardiff Blues (A4) with just five points between them. A win would all but guarantee Cheetahs a place in the Final Series, but Danny Wilson’s men are in terrific form and are liable to upset any team they face at the moment.

Fresh from their European heroics Scarlets (B2) need a win against Glasgow Warriors (A1) at Parc y Scarlets (KO 16:15, Sky Sports) to keep the pressure on Leinster. This is a meeting between the 2015 and 2017 champions which could occur again in the Final Series as these two teams set their sights on lifting the trophy.

Benetton Rugby (B5) are just a point away from Ulster in the battle for the Champions Cup Play-Off place in Conference B and need a win here against Dragons (B6). The game takes place in Treviso (KO 18:00 Italy / 17:00 UK, Eurosport) and a home victory would see Benetton equal their most-ever wins in a Championship season.

Southern Kings (B7) welcome Munster (A2) to the City of George where Outeniqua Park (19:35 SA / 18:35 IRE/UK, SuperSport) provides a stunning backdrop for the province’s first visit to South Africa. Having beaten the Dragons and come close against Benetton, the Kings now face the ultimate test against one of European rugby’s most storied outfits.

Edinburgh (B3) meet Ulster (B4) at BT Murrayfield (KO 19:35, BBC ALBA, BBC NI) where both teams’ ambitions for this season and beyond are at stake. A win puts Edinburgh into the Guinness PRO14 Final Series for the first time and would show remarkable progress during Richard Cockerill’s first year as head coach while adding to the feel-good factor in Scottish rugby. Defeat for Ulster would ensure their only route into the next season’s Champions Cup can come via the Play-Off but with Benetton Rugby just a point behind them nothing can be assured. 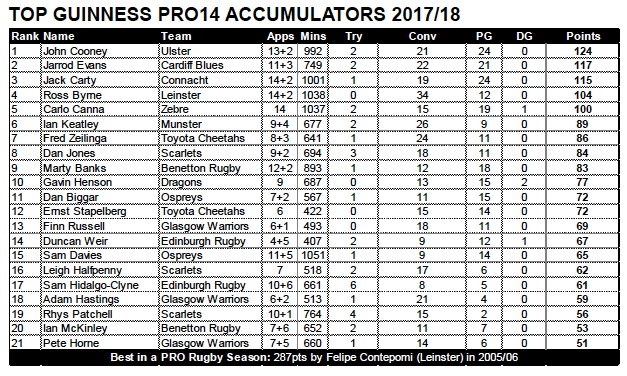 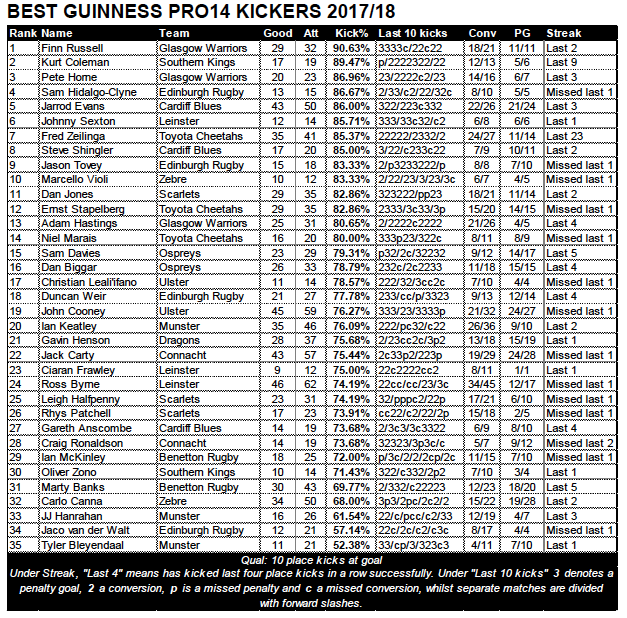