So many storylines have emerged during an historic season such as the Toyota Cheetahs’ push for a Final Series place in their debut season, the return to form of Benetton Rugby as part of an Italian resurgence and Richard Cockerill’s impact at Edinburgh.

In addition, former champions such as Scarlets, Glasgow Warriors, Leinster and Munster are all plotting their courses to the Guinness PRO14 Final at Dublin’s Aviva Stadium on May 26 as the Championship promises to deliver its best-ever campaign. 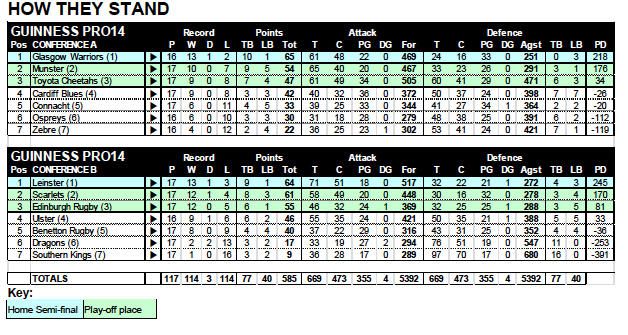 On Friday Connacht (A5) take on Edinburgh (B3) at the Sportsground (KO 19.35) where the visitors are looking to extend their winning run to six in a row. Connacht still have a chance of making the Champions Cup Play-Off while Edinburgh are aiming to make their first appearance in the Guinness PRO14 Final Series.

Dragons (B6) welcome Toyota Cheetahs (A3) to Rodney Parade (KO 19.35) and the South Africans are in need of adding to their recent win over Connacht in order to keep their Final Series challenge in good health. Dragons, however, will be are eager to rebound from their recent loss to the Southern Kings.

Glasgow Warriors (A1) face Zebre (A7) at Scotstoun (KO 19:35) having already secured their place in the Guinness PRO14 Final Series and now set their sights on locking down a home Semi-Final. Zebre, however, will have some Italian internationals returning and will hope to improve on their travelling record.

Saturday’s first game sees Southern Kings (B7) play Benetton Rugby (B5) in Port Elizabeth (KO 15:00) and Deon Davids’ team will be buoyed by their first win over Dragons last time out. But Benetton need to keep the pressure on Ulster for the Champions Cup Play-Off and a win here would prove very valuable.

The Cardiff Blues (A4) are on a good run of form chasing the Cheetahs for a Guinness PRO14 Final Series place and need to keep up their winning run against Ulster (B4) at Cardiff Arms Park (KO 15:15). Ulster need to recapture some momentum and this result could prove pivotal for both teams.

Ospreys (A6) have begun to find some life after a difficult start to the season and take on Conference B leaders Leinster (B1) at Liberty Stadium (19:35). The hosts still have the opportunity to chase down a Champions Cup Play-Off place but the Irish province have proven difficult to beat all season and this should prove no different.

Pick of the Round - Munster Rugby v Scarlets

On Saturday evening, Munster (A2) and Scarlets (B2) meet in a replay of last season’s Championship Final at Thomond Park (17:35) with so much on the line. The defending champions, Scarlets, cannot afford to lose any ground on Leinster in Conference B and Munster will feel likewise in Conference A, knowing that the Cheetahs and the Cardiff Blues are in pursuit. Both teams have shown robust consistency in the Championship for the last 18 months and this promises to be an intriguing affair. 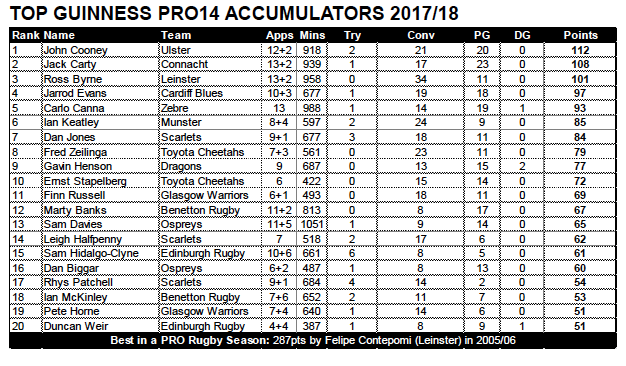 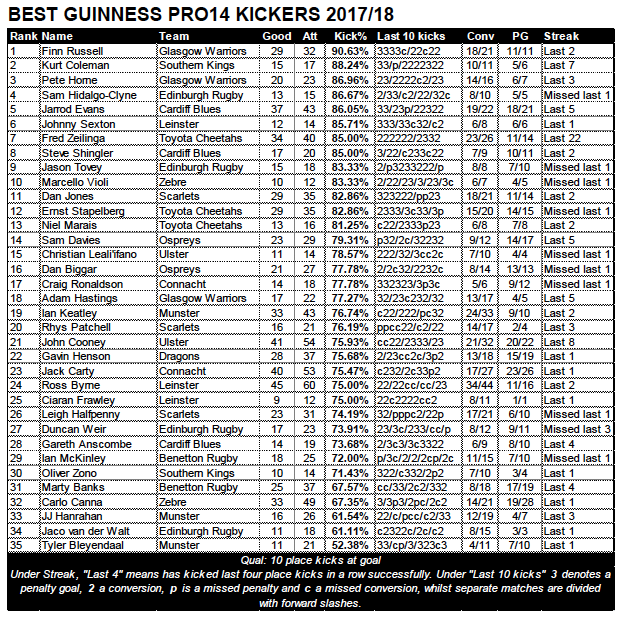