With only a quarter of the Guinness PRO14 season remaining every point is precious as Round 17 prepares to kick off across Ireland, Italy, Scotland, South Africa and Wales.

Teams from each country are still seeking to cement their place in the Guinness PRO14 Final Series or chase a Play-Off place in order to claim the seventh Champions Cup berth. The first-ever Guinness PRO14 Final takes place at Aviva Stadium on May 26 (see www.ticketmaster.ie or www.pro14rugby.org/final and this weekend will provide more clues as to whether Scarlets can defend their title or if another champion will emerge. 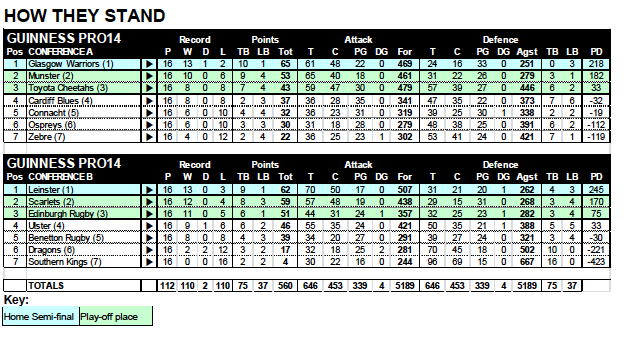 Cardiff Blues take on Benetton Rugby at Cardiff Arms Park (KO 19.35, BBC Wales) with the home team looking to make it four wins in a row as they set their sights on Champions Cup qualification and even a Final Series place. The Italians, however, are in a good run of form and are looking to set their own record for most wins in a season.

Edinburgh welcome Munster to BT Murrayfield (KO 19.35, BBC ALBA, TG4) with a firm hold on the third Final Series place in Conference B. However, Munster are determined to reel in Conference A leaders Glasgow Warriors so there is lots to play for between a pair of teams who are currently on course to meet in the Semi-Final Qualifiers.

The Southern Kings have returned to warm surrounds of Port Elizabeth to host Dragons (KO 19:35 SA /17:35 UK, SuperSport). The Kings are still searching for their first win in the Guinness PRO14 and they have come very close in a number of their home games and Bernard Jackman’s team will keen to avoid any slip-ups here.

The final game on Friday night sees Ulster meet Glasgow Warriors in Belfast (KO 19:35, BBC NI). The Warriors lost only their second Championship game of the season last weekend against Munster and face an Ulster team desperate to regain some momentum and apply pressure on Edinburgh.

Zebre face Ospreys on Saturday evening in Parma (KO 18:30 Italy / 17:30 UK, Eurosport Italia, S4C) where a win for the Italians will set a new record for most wins in a season and puncture Ospreys’ hopes of climbing up in the race for the Champions Cup Play-Off place in Conference A.

The Toyota Cheetahs return to home comforts in Bloemfontein as Connacht (KO 19:35 SA/ 17:35 IRE, SuperSport, Sky Sports Action) make the trip in a fixture where both teams are in serious need of points. Cheetahs are looking to arrest a slide of three defeats in a row while Connacht need to hold off Ospreys in the Champions Cup race, but their hosts are in good try-scoring form and they have lost just once at Toyota Stadium this season.

Pick of the Round - Scarlets v Leinster Rugby

On Saturday, Scarlets and Leinster (KO 15:15, live on Sky Sports Main Event & Sky Sports Action) meet in a game that will have a big impact on who finishes top of Conference B. Scarlets left Dublin with a losing bonus-point two weeks ago and will be looking to ensure Leinster leave empty-handed. However, the four-time champions produced 10 tries in Round 16 and their attacking game will be a big threat in Llanelli. 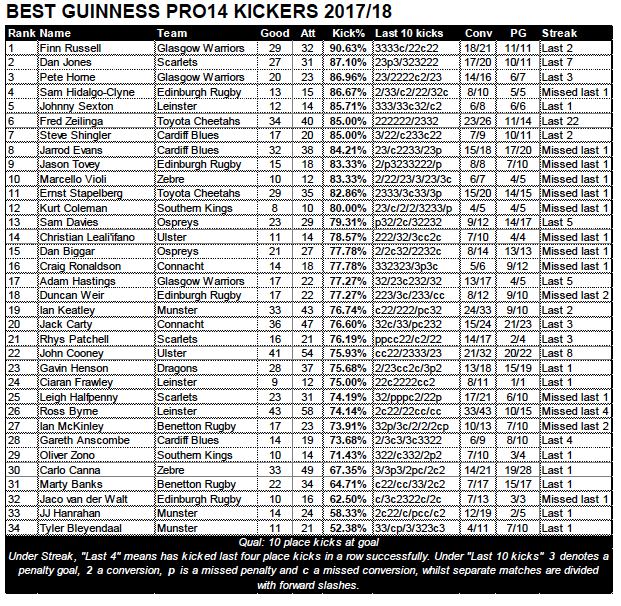 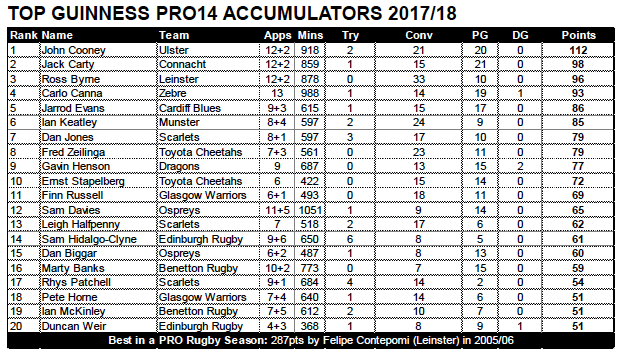