Round 17 of the Guinness PRO14 arrives after a weekend which saw the race for Finals Series spots get even tighter.

Last weekend’s results meant that champions Leinster became the first team to secure their place (with a home Semi-Final on offer next), while Munster and Glasgow Warriors won to keep setting the pace in Conference A. However behind them, the chase is as close as ever for the remaining places.

This weekend sees some huge games taking place, in particular with Benetton hosting Edinburgh and Connacht taking on the Ospreys. 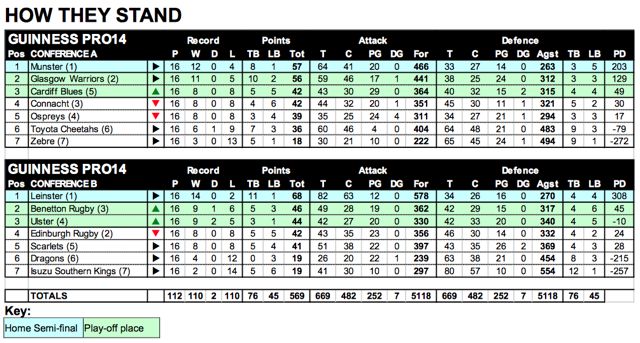 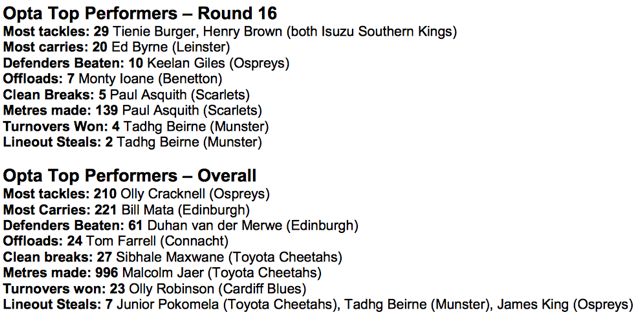 The weekend kicks off on Friday night with just the one game, as Leinster (B1) play host to the Toyota Cheetahs (A6) at the RDS (live on Premier Sports 1 and eir Sport 1, 19:35 and SuperSport 1 & DAZN, 20:35). Leinster’s bonus-point win over the Isuzu Southern Kings last week, combined with other results meant that the 2017/18 champions are now mathematically assured of a place in the Finals Series, and another win would seal top spot in Conference B. The Cheetahs, by contrast, really need a win to stay in touch in the race for a top three spot in Conference A. However, they are still searching for a first win in Ireland, and face a Leinster team who have not lost at home since April 2018.

Saturday’s action begins at the Sportsground as Connacht (A4) host the Ospreys (A5) (live on Premier Sports 1 and TG4, 14:45, DAZN 15:45). With just three points separating Cardiff Blues, Connacht and Ospreys in the race for a Finals Series spot, this could have huge implications for the end of season. The Ospreys were narrowly beaten by Munster last week and have now lost five in a row in all competitions to slip to fifth in Conference A. Connacht, meanwhile, have had some struggles of their own with just one win in their last four in the Championship but have not lost at home to a Welsh side since 2017.

Later on Saturday the Scarlets (B5) host Munster (A1) in a re-run of the 2017 Final, this time at Parc y Scarlets (live on Premier Sports 2, TG4, S4C and eir Sport 1, 17:00, DAZN 18:00). Last year’s runners-up find themselves in a perilous position in the race for a Final Series sport, sitting fifth in Conference B. They are however only five points off Benetton in second, so that could all change in a single weekend. The Scarlets boast a fine home record, with just one defeat at Parc y Scarlets since 2016 in the Championship, and they got back to winning ways against the Cheetahs last time out. Munster, however, were victorious on their last trip to the Scarlets, winning in September 2016.

Glasgow Warriors (A2) will look to keep the pressure on Munster as they travel to Parma to take on Zebre (A7) (live on Free Sports, 17:15, DAZN, 18:15). The Warriors sit just a point back on Munster following last week’s bonus-point success against Connacht, and now face a Zebre side who they have beaten in all 13 meetings between the sides. The Warriors were beaten on their last trip to Italy, away to Benetton, while Zebre beat the last Scottish opposition to come to Parma, Edinburgh.

The final game of Saturday is Cardiff Blues (A3) at home to the Isuzu Southern Kings (B7) (live on Premier Sports 2 19:35, DAZN 20:35, Super Sport 1, 21:35). The Blues came from behind to record a vital win away at Edinburgh last week, and moved into the top three in Conference A. They will be keen to consolidate that position against a Kings side whose only wins this season have come against Scottish opposition. The Blues have only been beaten once in their last four games, that thriller against Glasgow Warriors, and with their two play-off rivals facing each other earlier in the day, a win could open up some breathing room ahead of the loser in Galway.

Finally, on Sunday Ulster (B3) travel to the Dragons (B6) in need of a win at Rodney Parade (live on Premier Sports 2, 15:00, DAZN 16:00, Super Sport 1, 17:00). A big win over the Kings got Ulster back into the top three in Conference B, and they have the chance to cement that place in Wales. The Dragons have not beaten Irish opposition since 2017, although the last time the teams met at Rodney Parade, they played out a thrilling 32-32 draw. Ulster are on a good run having now won two in a row on the road, and will look to make it three straight away wins for the first time since 2016.

Pick of the Round – Benetton v Edinburgh

The pick of the games in Round 17 comes in Italy as Benetton (B2) host Edinburgh (B4) (live on Premier Sports 2, 15:00, DAZN, 16:00). A record win last time out against the Dragons consolidated Benetton’s position in the top three, and they can give their chances of making a first Final Series spot a real boost this weekend. They host an Edinburgh team who are still right in the thick of things but will have to get the better of Benetton who have not lost in seven in the Championship. Edinburgh’s record at the Stadio Monigo is played eight, won four, lost four. Their Finals Series hopes may end up being dependent on whether they can come away from this weekend with a winning record in Treviso. 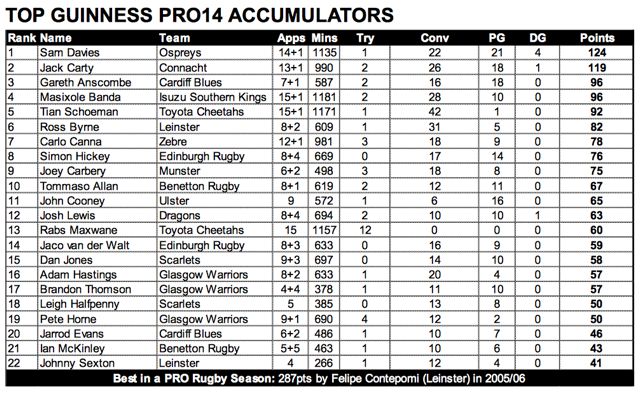 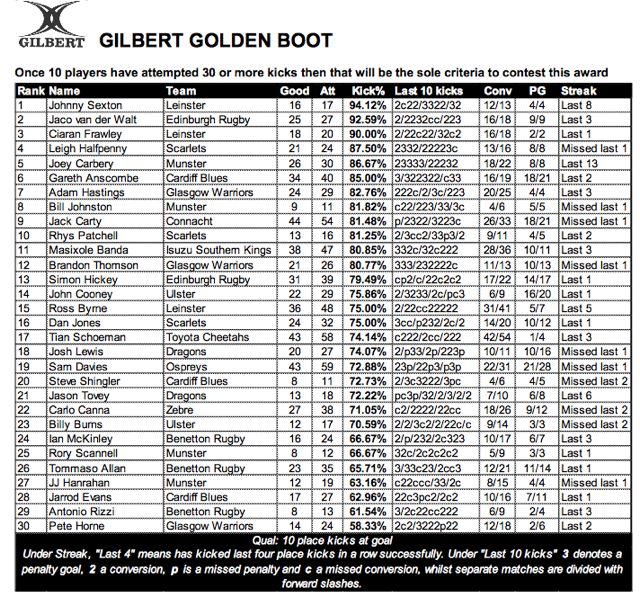