Look ahead to this weekend’s Guinness PRO14 action.

Round 16 of the Guinness PRO14 comes swiftly on the heels of an entertaining weekend which saw plenty of tries scored all across Europe and three impressive away wins. Those victories came on the road for Ulster Rugby at Ospreys, Leinster Rugby at Zebre, and Glasgow Warriors’ lung-busting 38-34 victory at Cardiff Arms Park.

Ulster and Leinster’s victories contributed to an excellent round for the Irish provinces, as all four registered victories to advance their claims ahead of the Guinness PRO14 Finals Series.

In the Conference tables, Munster Rugby hold a slight advantage over Glasgow Warriors in Conference A, while Leinster are still reigning supreme in Conference B. 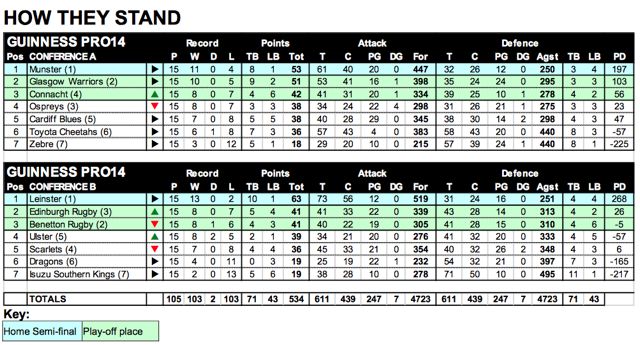 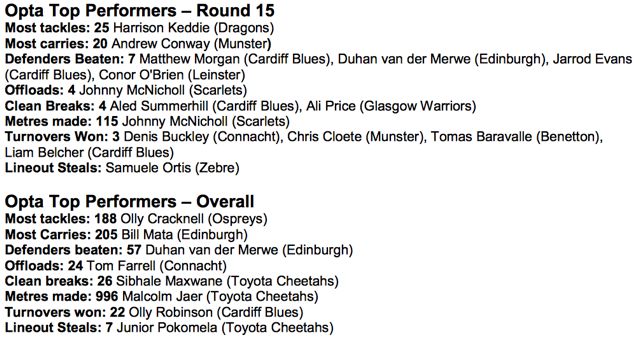 The weekend kicks off on Friday night with a triple header of action that involves Glasgow Warriors (A2) hosting Connacht (A3) at Scotstoun in an intriguing battle at the top end of Conference A (live on Free Sports 19:35). If Connacht have any designs on overhauling second-placed Glasgow then this match would be the perfect place to start, with Connacht in good form following their 25-17 victory over the Toyota Cheetahs on Saturday. The Warriors though are in good form themselves after their scintillating Saturday night win at Cardiff Blues, and have only been defeated at home by Edinburgh this season, at the end of December.

Slightly later on Friday night it’s top versus bottom in Conference B as Leinster (B1) host the Isuzu Southern Kings (B7) at RDS Arena (live on Premier Sports, eir Sport 1 and TG4, 19:55). The Dublin- based province have won all three previous encounters between these two sides but the Kings pushed them close in November, losing just 38-31. Leinster have won their last five in all competitions, while the Kings’ two victories this season have both been against Scottish opposition.

The Saturday lunchtime kick-off sees Dragons (B6) travel to Benetton Rugby (B3) (live on DAZN, S4C, Premier Sports 1 and eir Sport 1, 13:00). Dragons have performed well in recent rounds, losing out 34-17 at in-form Edinburgh last time out and only being pipped 8-7 by Munster in Round 14. The Welsh region face a tough challenge though with Benetton currently flying – the Italian outfit have picked up 23 Championship points from their last six encounters, with only Leinster and Munster having tallied more. Scarlets led three times against Benetton at the weekend, but tries from Toa Halafihi, Luca Sperandio and Federico Ruzza maintained Benetton’s red-hot form.

Meanwhile, in one of two late kick-offs on Saturday evening, hosts Edinburgh (B2) will look to consolidate their position in Conference B when they face Cardiff Blues (A5) at BT Murrayfield (Premier Sports, 19:35). Richard Cockerill's men bounced back from Round 14 defeat away to Southern Kings by beating Dragons 34-17 last weekend - thanks in part to more wing wizardry from Duhan van der Merwe - and will hope to pull clear of third-placed Benetton this weekend. Visitors Cardiff Blues, by contrast, were on the wrong end of a thrilling encounter against Glasgow Warriors, but are still firmly in the hunt for a place in the Guinness PRO14 Final Series. Despite defeat at Arms Park, head coach John Mulvihill will be buoyed by star performances from the likes of Aled Summerhill and Owen Lane - both of whom will be crucial to the Welsh side's hopes on Saturday.

In the other late kick-off on Saturday, Ulster (B4) welcome Zebre (A7) to the Kingspan Stadium (Premier Sports, DAZN, 19:35). Narrow victors away to Ospreys in Round 15, Dan McFarland's men come into the clash off the back of a four-game unbeaten streak and have tasted defeat just once in Belfast over the past 12 months. With just two points separating Ulster from Edinburgh in second, the hosts will look to take a big step towards Final Series qualification against the Italians. Zebre, for their part, have gone without a win since Round 7, but can at least point to one positive omen ahead of the match; the men from Parma taking bragging rights the last time the two teams met back in 2017.

Round 16's final game sees Scarlets (B5) take on Toyota Cheetahs (A6) on Sunday (Premier Sports, eir Sport, Super Sport, 13:00). The hosts have won just one of their last six matches, yet can rely upon a formidable home record that has seen them lose just once since the opening round of the 2016/17 campaign. Visitors Cheetahs saw their own winning run come to an end in Connacht and will need to improve on their form outside of South Africa if they are to take the spoils in south Wales. Franco Smith's team have tasted glory just three times on their travels since joining the Guinness PRO14.

Round 16's standout fixture is an intriguing Friday night match-up under the lights between Conference A leaders Munster (A1) and Ospreys (A4) at the Liberty Stadium (Premier Sports, eir Sport, TG4, 19:35). Nilled for the first time ever at home last weekend, a wounded Ospreys will be eager to make amends in front of their own fans but face one of the Guinness PRO14's in-form sides in Munster, who have won their last six matches in all competitions.

Spurred on by a superb Andrew Conway display, Johann van Graan's team roared to a 43-0 success against Southern Kings last Friday and have also tasted victory in four of their last five trips to the Liberty Stadium. Another win here would send out a serious statement of intent to the rest of their Conference A rivals. 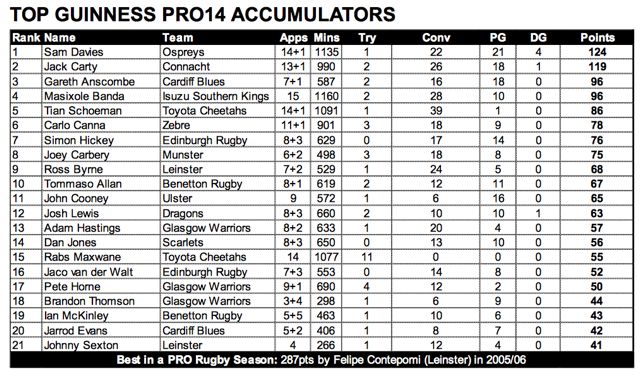 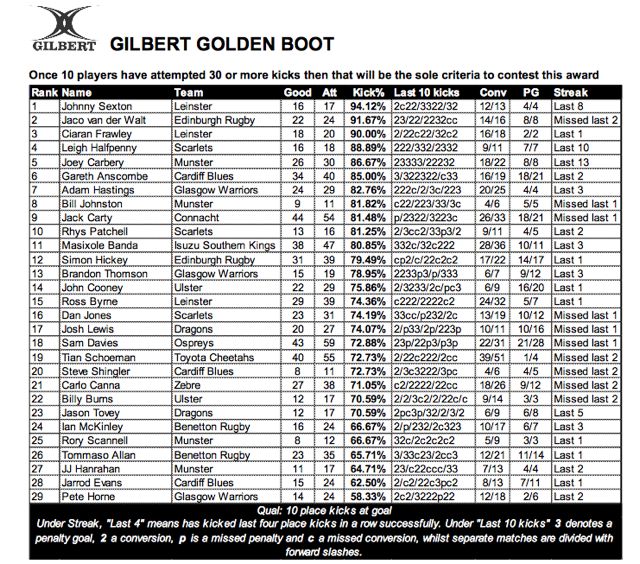 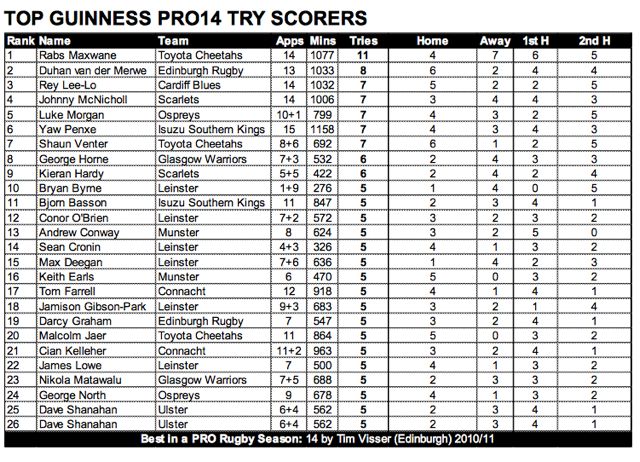