After a fortnight of European action, the Guinness PRO14 returns for Round 14. And, on the eve of the Guinness Six Nations, there is plenty to prove as the race hots up for the Final Series.

Conference A is as tight as it gets with everyone from Munster on top down to Cardiff Blues in fifth still vying for the knock- out berths.

Meanwhile in Conference B, Benetton Rugby continue to catch the eye in a packed field behind runaway leaders and defending champions Leinster. Edinburgh in second and Ulster in fifth are only separated by two points – and the race could take another twist this weekend with some mouth-watering match-ups. 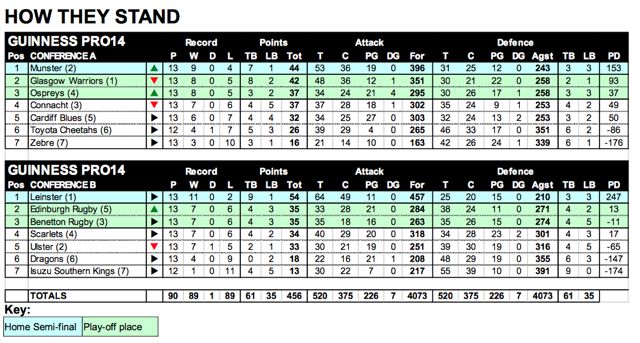 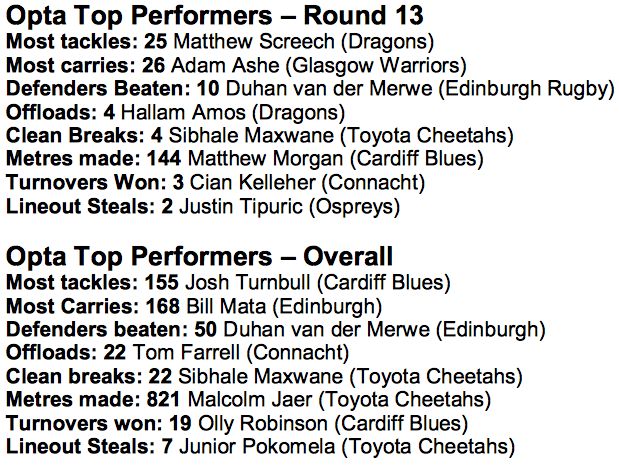 Second plays third in Conference A on Friday night as Glasgow Warriors (A2) – downed last time out by Benetton Rugby – look for revenge when Ospreys (A3) come to Scotstoun (live on Premier Sports 1 and eir Sport 2, 7:35pm).

This crucial clash sees Dave Rennie’s side keen to turn a slump in form around that has seen them only win once in their last five games in all competitions. Ospreys meanwhile have only lost once in their last four Guinness PRO14 games but have only got one away win to their name in the Championship this season – against Zebre in round five.

Glasgow have won all six games against Welsh opponents this season and Ospreys have a tough head to head record against the Warriors to overcome – the Scottish outfit have won the last three clashes and counting.

Also on Friday night, Conference B is set for a shake up as Ulster Rugby (B5) welcome Benetton Rugby (B3) to the Kingspan Stadium (live on Free Sports, eir Sport, DAZN, 7:35pm).

Ulster are on a high after two wins from two in the Champions Cup secured a Quarter-Final berth but domestically, they have lost two in a row in the Guinness PRO14. By contrast, Benetton have won five in a row in the Championship and are chasing a third away win on the spin – a feat never before achieved by the club. They will have to do it the hard way in Belfast though where Dan McFarland’s side seldom lose – only Connacht have won there since last February.

Saturday sees Dragons (B6) welcome Conference A leaders Munster Rugby (A1) to Rodney Parade (live on Premier Sports 1, TG4 and eir Sport 1, 3pm). The Welsh region downed Munster at Rodney Parade back in December 2015 but have lost the last four meetings between the sides since then. And they meet a Munster side in rich form – they have only lost once in the Guinness PRO14 since early October and secured a spot in the Champions Cup quarter-finals last time out. However, Johan van Graan’s side have lost on their last two trips to Wales, both against Cardiff Blues at the Arms Park in February and September of last year.

Over in Bloemfontein, the in-form Toyota Cheetahs (A6) put their impressive record against Italian opponents on the line against Zebre Rugby (A7) (live on Premier Sports 2, eir Sport 1 and DAZN, 1pm & Super Sport 3pm). The Cheetahs have won four of their five clashes against Italian sides since joining the Championship and have only lost once in their last four Championship games. Zebre meanwhile are on a six-match losing run in the Guinness PRO14 since they downed Edinburgh in Parma back in October of last year. The two sides have met three times already, and the Cheetahs have emerged victorious every time so Michael Bradley’s side have their work cut out to halt their slide.

Defending champions Leinster downed Cardiff Blues (A5) at the Arms Park on the opening day of the season but since then the Welsh region are unbeaten at their home fortress. They put that record on the line this Saturday when the impressive Connacht (A4) come to town (live on Premier Sports 2, S4C and TG4, 5.15pm) looking to steal a march on their Conference A rivals in the battle for a top-three finish. Andy Friend’s in-form Irish province have lost just twice in their last 10 games in all competitions but are notoriously poor travellers to Wales. They have lost on their last five trips there – in fact their only win in their last nine came in February 2017 at Cardiff Arms Park.

The Isuzu Southern Kings (B7) have only won once in the Guinness PRO14 all season – against the Glasgow Warriors back in September. But this weekend they welcome Glasgow’s near neighbours Edinburgh (B2) to the Madibaz Stadium hoping for lightning to strike twice (live on Super Sport 5.15pm & Premier Sports 2, 3.15pm). However, Richard Cockerill’s side are one of the in-form teams in Europe – they have won seven in a row in all competitions and are in the European Champions Cup quarter-finals for the first time since the 2011/12 season. They have won with a bonus point the last three times these two sides have met, but the Kings pushed the Cheetahs close last time out and will be keen to spring a surprise.

Pick of the Round – Leinster v Scarlets

Friday night at the RDS sees a rematch of last season’s Guinness PRO14 final as Leinster (B1) welcome Wayne Pivac’s Scarlets (B4) (live on Premier Sports 2, eir Sport 1 and TG4, 7:35pm). Scarlets have good history in the RDS – they won the 2017 Semi-Final there on their way to the title. But since then Leinster have only lost once – to Benetton Rugby last April – at the RDS and indeed the defeat to Munster at Thomond Park after Christmas was their only defeat in any tournament since October.

Scarlets meanwhile snapped a three-game losing run in the Championship last time out against the Dragons and have only won once on the road in the Guinness PRO14 all season. But they did down Leinster at Parc y Scarlets in round two and could achieve a season’s double over the Irish powerhouses for the first time in their history. 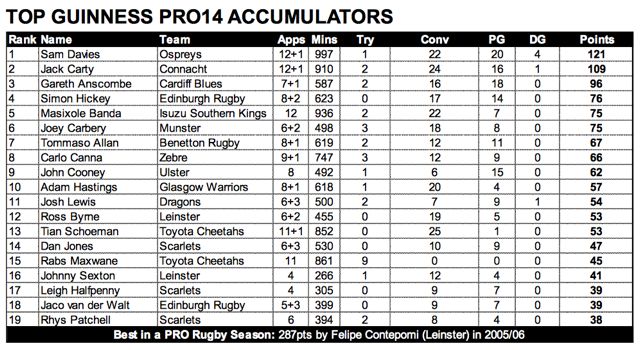 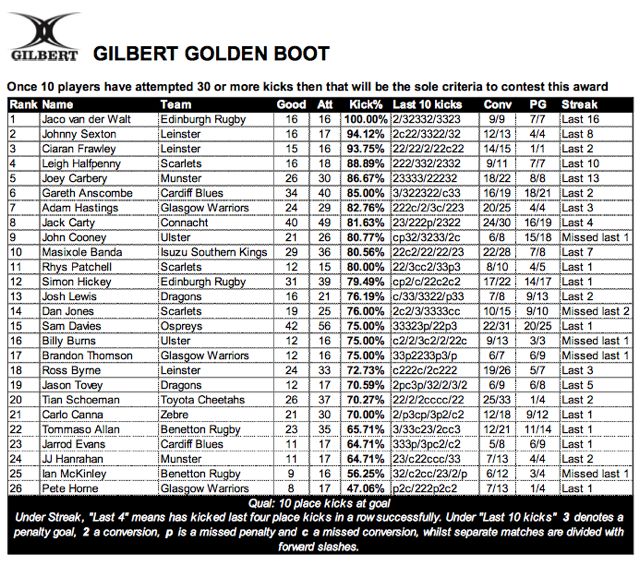