The Guinness PRO14 has plenty of storylines to offer in Round 13 with more Welsh and Irish derbies on the fixture list while the South African teams return to action after their winter break.

The Festive Derbies drew bumper crowds with close to 150,000 attending during Rounds 11 and 12 across Italy, Ireland, Scotland and Wales. Round 12 also saw a number of nail-biting finishes with Cardiff Blues v Scarlets, Leinster v Connacht and Zebre v Benetton going right down to the final play of the game.

This weekend the northern teams will look to cement their places before returning to European action while the Toyota Cheetahs and Southern Kings will face each other in back-to-back games after their trips Italy & Scotland. 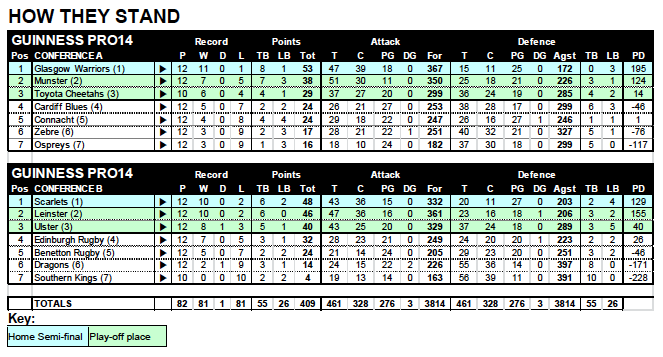 The Southern Kings return to Guinness PRO14 action with a trip to Scotland to face Edinburgh (BBC Alba, 19:25 & SuperSport 1, 21:30). Edinburgh will be buoyed by their Derby win over Glasgow Warriors in Round 11 and the Conference B side will be keenly aware that they could close the gap on 3rd placed Ulster. Although the Kings have been improving, Richard Cockerill’s men are in form and chasing their 10th win out of 12 games in all competitions.

Champions Scarlets entertain Dragons (BBC 2 Wales, 19:30) having shown some serious grit in the previous Derby games with Ospreys and Cardiff Blues to stay on top of Conference B. Scarlets are just two points ahead of 2nd-placed Leinster and have not lost in their last 16 home games in the Championship. Dragons, however, will provide plenty of muscle in this contest having performed well in their past two Derbies despite those losses and if Wayne Pivac’s team take their eye off the ball then the visitors may well spring a shock.

On Saturday, Benetton Rugby take on the Toyota Cheetahs (Eurosport Italia 2, 14.10 & SuperSport 1, 15:10) after two wins over Zebre. This out of Conference fixture will have an impact on both teams with the hosts trying to stay in touch with Edinburgh, who currently occupy the Champions Cup Play-Off place in Conference B, while the South Africans have some ground to make up on Munster who are second in Conference A. If Benetton can get a win here it will be their third consecutive Championship victory, a feat they last achieved in 2012.

Munster take on Connacht (TG4, 19:40) at Thomond Park and the home team need to regain momentum after losses to both Leinster and Ulster in recent rounds. The men in red have lost all four interprovincial Derbies in the Guinness PRO14 this season, including away to Connacht in the reverse fixture. History is against the Westerners with Connacht having won just two away Derby games in the history of the Championship, but Kieran Keane’s team have improved over the past six weeks and they will draw inspiration from their 2015 victory at the Limerick ground.

Ospreys face Cardiff Blues in Swansea (Sky Sports 15:00, Ch 407 & S4C 15:00) and this will an intense match-up between two sides will plenty to play for. Despite a slow start to the season, Ospreys can still make up ground to get into the Champions Cup Play-Off position. The Blues will be keen to qualify automatically and their current hold on fourth place would be enough to make it into the Champions Cup if the Cheetahs (ineligible) finish above them.

Pick of the Round: Leinster v Ulster

This Conference B clash will have a bearing on the title ambitions of both teams with Leinster in second looking to stretch the gap between Ulster in third. After a record defeat to Connacht in Round 11, Ulster produced a record comeback against Munster in Round 12 and the stakes are high going into this game in Dublin (Sky Sports Main Event, Ch 401, 17:30, TG4 17:20 & BBC2 NI, 17:30). Leinster have back-to-back wins over Munster and Connacht and need another victory here to keep on the heels of 1st-placed Scarlets. This promises to be a fiery affair with so much at stake for both teams and their players, who are eager to impress ahead of Europe and the Six Nations. 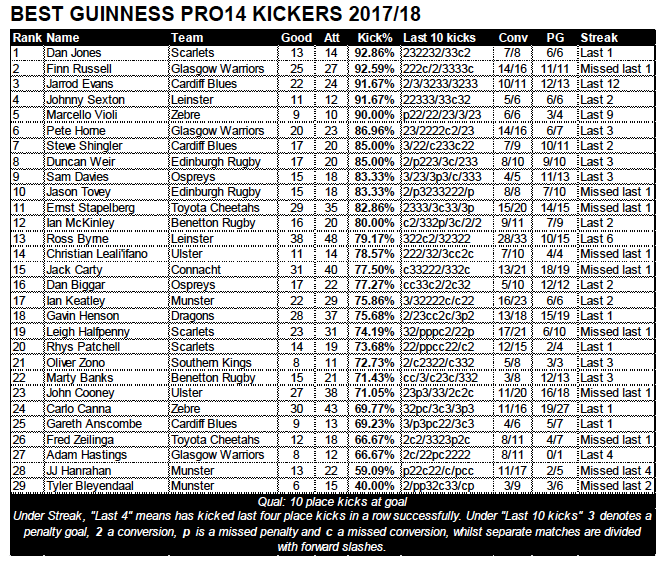 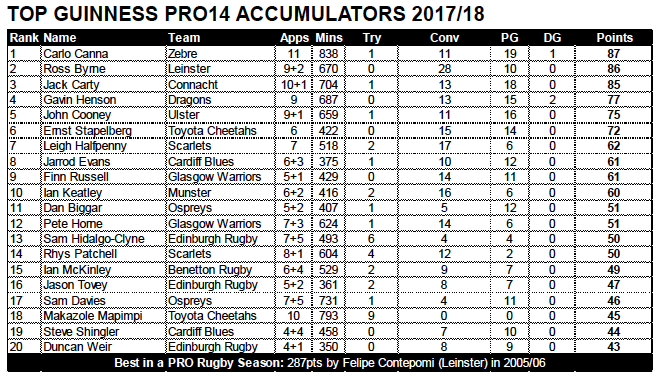