The first weekend of 2019 sees more derby action in the Guinness PRO14.

It has been all change in Conference A with five teams now battling it out for Final Series positions while Benetton Rugby are up to third in Conference B as they aim to become the first Italian club to reach the knock-out stages. 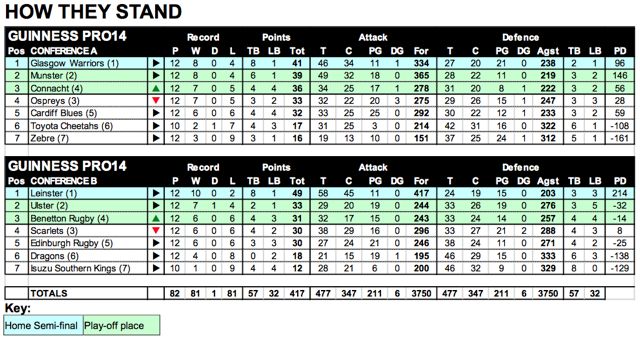 Benetton Rugby (B3) have reached third position Conference B after a run of victories in South Africa and back-to-back wins over Zebre, but they face a stern test in the shape of Glasgow Warriors (A1) who visit Treviso (DAZN 15:00, SuperSport 1, 16:00, Premier Sports 2, 14:00). But the visitors will also face a tough examination as they attempt to recover from their double 1872 Cup defeats to Edinburgh which has allowed Munster and Connacht to close the gap on the Warriors.

Dave Rennie’s team boast an impeccable record against Italian opposition with 27 consecutive wins, however, in front of a buoyant crowd in the refurbished Stadio Monigo, Benetton have an opportunity to get a true measure of themselves against one of the top teams in the Guinness PRO14 and see where they stand in the reckoning of Final Series contenders.

Defending champions Leinster (B1) are licking their wounds from only their second Championship defeat of the season against Munster in Round 12 as Ulster (B2) are challenged to chip into their opponents’ 16-point lead at the top of the Conference (live on eir sport 1, Premier Sports 2, 17:15 and SuperSport 1, 19:15).

Leinster are a fearsome force at the RDS Arena and you have to go back to 2013 for their last loss at the hands of an Irish province, that it was Ulster will provide little comfort to the visitors as they begin life without Henry Speight, the Australian international who joined the province on a short-term contract in the summer. Dan McFarland has steadied the ship during his first season in Belfast, but coming off a tough loss to Connacht against a Leinster team eager to right their own wrongs will require a hard day’s work at the office.

Scarlets (B4) are in need of a result to kick-start their season but Dragons (B6) are starting to pick up form which means that nothing is certain in Llanelli (live on Premier Sports 1 & eir sport 2, 17:15). Cardiff Blues’ victory over the men in red in Round 12 brought to an end Scarlets’ 27-month, 26-match, unbeaten home record in the Guinness PRO14 at Parc y Scarlets – a run of form that was on course to set a new Championship record.

Dragons’ will be buoyed by their narrow loss in Cardiff and their win over Ospreys last weekend, but they have not won an away game in the Championship in their last 38 attempts. Champions in 2017, Scarlets have lost ground to Benetton in Conference B as they bid to reach the Final Series and they will be desperate to get back to winning ways in this one.

The Sportsground will be full to capacity in Galway as Munster (A2) arrive to face Connacht (A3) where a win for the home team would see them leap frog the two-time European champions in the Conference table (live on TG4, eir sport 1 & Premier Sports 2 19:35).

Connacht were in second place before their opponents’ win over Leinster in Round 12 and there are plenty of positive signals that Andy Friend’s team may make a return to the knock-out stages for the first time since 2016. Their derby form in the past couple of weeks has been strong, even if their late, late loss to Leinster will be rued in years to come, however, Connacht showed strong character to bounce back against Ulster last weekend.

Munster will want to solidify their place in the top end of Conference A, particularly after Glasgow’s recent slips have left just two points between the two sides, however, Johann van Graan’s men will not overlook Connacht on their own patch where they won all three of their derby games last season.

Edinburgh (A5) will bounce into their game at BT Murrayfield against the Isuzu Southern Kings (B7) (live on Premier Sports 1, SuperSport 1 & eir sport2, 19:35) knowing that if results go their way in Round 13 they could slingshot into second place behind Leinster.

Richard Cockerill’s men struggled for consistency earlier in the campaign coming off the back of their first-ever Guinness PRO14 Final Series appearance last season. However, Scotland’s capital team have bounced back in the Guinness PRO14 and the Champions Cup and their back-to-back wins over Glasgow Warriors have set them up for a good 2019. The Isuzu Southern Kings are playing their first game since their winter break and an away win the Guinness PRO14 still remains elusive for Deon Davids’ team.

However, after their month-long break, the South Africans should leave be refreshed and rejuvenated coming into this game. The Cheetahs’ most obvious issue since joining the Guinness PRO14 has been their failure to consistently win on the road, but one of their two away wins last season did come in Stadio Lanfranchi against Zebre. Chilly, but dry conditions are expected and this should be a close contest between two teams who love to throw the ball around.

Pick of the Round – Ospreys v Cardiff Blues

Ospreys (A3) have strong form at home this season with only Glasgow Warriors winning at the Liberty Stadium, but Cardiff Blues (A4) have been resurgent of late and their comprehensive win over Scarlets in Round 12 means that they will travel west once more with renewed confidence.

It is a vital fixture for both sides’ aspirations to reach the knock-out stages. Ospreys lost ground in Conference A after their loss to Dragons, but Glasgow’s recent skid means Allen Clarke’s team trail the leaders by eight and third-placed Connacht by just three.

Blues, meanwhile, have finished 2018 strongly and sit just one point behind their hosts ahead of this game (live on Premier Sports 1 & eir sport 2, 15:00). Their upcoming fixtures include Conference A rivals Connacht and Glasgow so this is a crucial run of games to see if they can reach the Guinness PRO14 Final Series for the very first time. 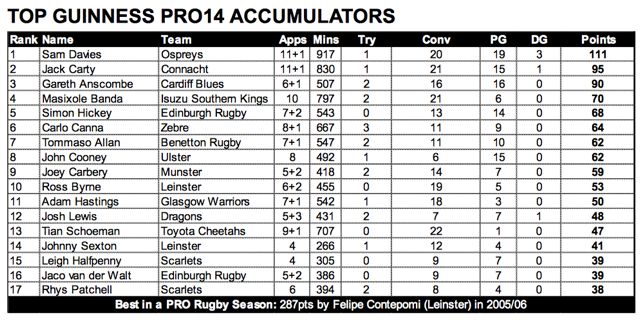 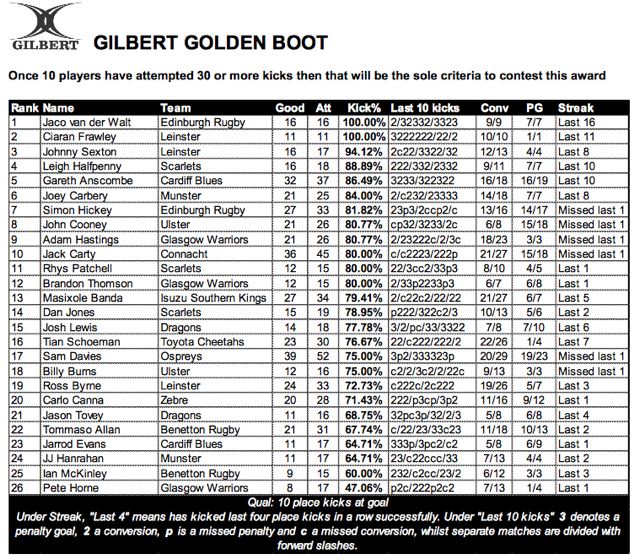 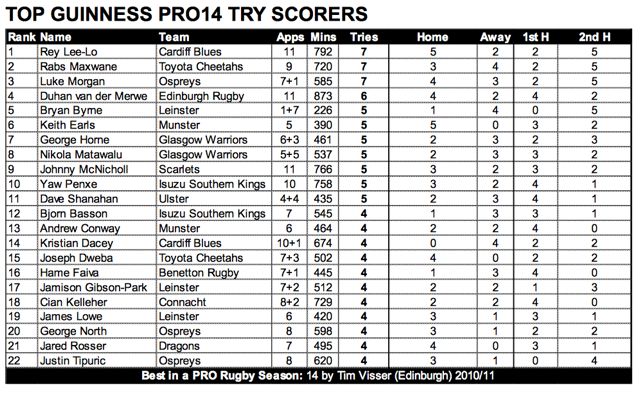