The Festive season brings with it a second helping of derby fixtures right across the Guinness PRO14 after Round 11 delivered tension and drama throughout the weekend.

Five of the six games produced losing bonus-points and some last-gasp winning scores as the local rivalries in the Championship delivered when it came to intense competition. 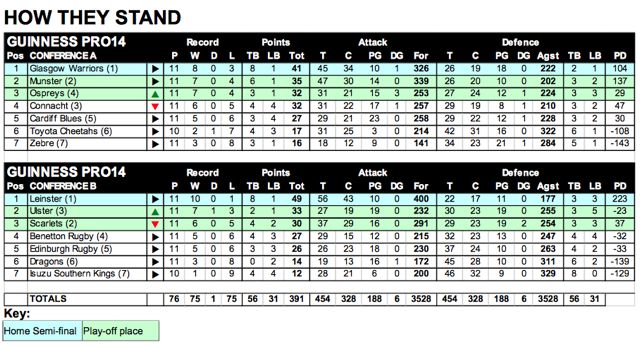 Connacht’s (A4) resurgence under head coach Andy Friend was strongly tested in the RDS last weekend and with Ulster (B2) arriving to the Galway Sportsground (live on TG4, eir sport 1 & 2, Premier Sports 1) the 2016 champions will believe they can return to winning ways. Jack Carty was man of the match in the loss to Leinster and if he can repeat his dazzling performance then Ulster will have a serious challenge to overcome.

The men from the north will arrive with confidence after their win over Munster, but Connacht swept away all three of their interprovincial rivals in Galway last season proving what a difficult venue the Sportsground is for visiting teams.

In Treviso Benetton (B4) take on Zebre (A7) (DAZN, FreeSports, eir sport 1) for the second time in six days after Kieran Crowley’s men ground out a tense 10-8 win in Parma. Now in his third year as head coach Crowley has asserted dominance over Benetton’s national rivals, winning five of the six fixtures between the teams.

After a winning a record number of games last season Benetton will be aiming to reach the Guinness PRO14 Final Series for the first time and a victory here would tee up their next home game with Glasgow Warriors very nicely. Benetton trail third-placed Scarlets by just three points and their results at the refurbished Stadio Monigo will prove crucial if they are to finish in the knock-out places.

The second leg of the 1872 Cup takes place at Scotstoun where Glasgow Warriors (A1) have to up their game against Edinburgh Rugby (B5) (Premier Sports 1 & eir sport 2) after the men from the Scottish capital won the first game at BT Murrayfield in Round 11.

Dave Rennie’s Warriors are still top of Conference A by nine points, but their momentum has been slowed of late this represents the perfect opportunity to get their title tilt back under full steam. Richard Cockerill, however, has got Edinburgh close to the form that saw them qualify for the Final Series last season and their progression would be greatly buoyed by sneaking a victory at the home of their closest rivals.

Scarlets (B3) host Cardiff Blues (A5) in Llanelli (Premier Sports 1 & eir sport 2) with both of these regions working hard to ensure their seasons continue to spark. The hosts have seen a few key faces depart this year but are still fully capable of producing the scintillating rugby that won them the Guinness PRO12 title two years ago.

Facing them is a Blues team which had to grit it out at home to Dragons last weekend with Gareth Anscombe kicking a late winner and proving yet again that he can keep his cool when pressure is on. Having qualified for the Champions Cup off the back of their displays last season, reaching the knock-outs will be top of their list of ambitions – but winning away to a former champion would provide them with the belief that they can do it.

Dragons (B6) welcome Ospreys (A3) to Rodney Parade (Premier Sports 1, S4C & eir sport 2) in a fixture between a team which has found its way again and another hoping emulate them. The hosts have been a mixed bag in the past three outings in the Guinness PRO14, with a hard-fought win over Edinburgh, a big loss to Leinster and a heart-breaking defeat away to Cardiff Blues. During that time Bernard Jackman has departed as head coach and the players will need to take the best of display in the Welsh capital back to Rodney Parade against an Ospreys team that is looking relevant again after last season’s disappointment.

Fresh from a derby win over Scarlets, Ospreys are proving much more consistent in their performances this season and on current form look set for a return to the Guinness PRO14 Final Series. Avoiding a banana skin here would help them keep in touch with Munster and Glasgow Warriors, but derby games are terrific equalisers and nothing can be taken for granted in this one.

Pick of the round – Munster v Leinster

Leinster’s (B1) visit to Thomond Park to face Munster (A2) has been sold out for some time now and it looks set to be an all-out battle (eir sport 1, Premier Sports 2). There is so much to play for in this game with Leinster 16 points clear at the top of Conference B while Munster are focused on reeling in Glasgow Warriors in Conference A.

With so many Irish internationals across both teams this also represents an opportunity for those players to reinforce their worth to the national team ahead of the Guinness Six Nations.

Leo Cullen’s team seem like an irresistible force at the moment, but Munster have downed plenty of high- flyers at their famous Limerick citadel and no team will narrow the eyes for the men in red in the way that Leinster do. 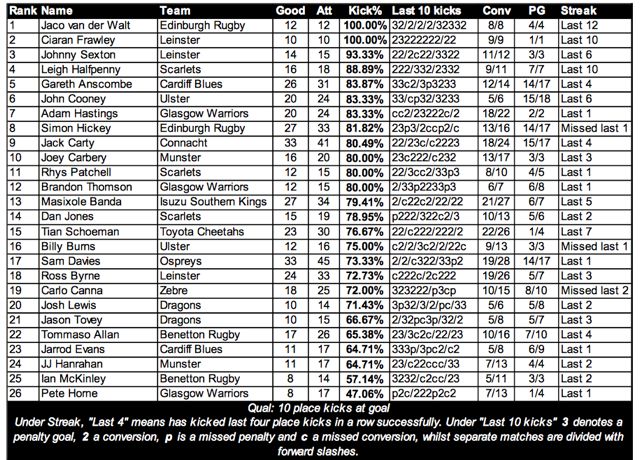