After a European break the Guinness PRO14 returns with a bang in Round 11 and with derby season beginning it should be a thrilling weekend.

It all kicks off on Friday night when Ulster host Munster, while Cardiff Blues play host to the Dragons.

On Saturday there are derbies in Wales, Scotland and Ireland, with Ospreys hosting Scarlets, then Edinburgh welcoming Glasgow Warriors in the 1872 Cup, followed by Leinster hosting Connacht. And finally on Sunday, Zebre will look to carry their European form into their all-Italian clash with Benetton. 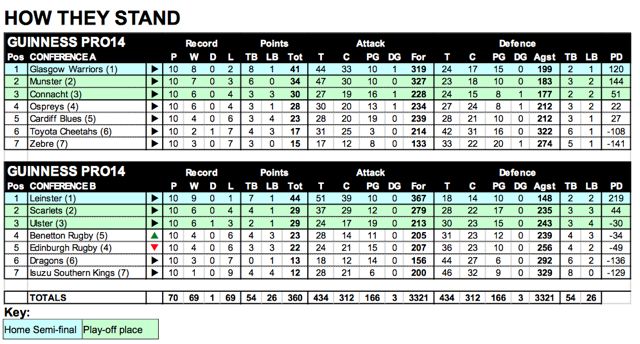 Two teams who are well-placed in Europe will meet at the Kingspan Stadium on Friday when Munster (A2) travel to take on Ulster (B3) (live on Premier Sports 1 and eir Sport 1 & 2, 19.35). Ulster welcome Munster to Belfast on the back of two vitally important bonus-point wins over Guinness PRO14 rivals the Scarlets in Europe. With just one defeat in their last six, Dan McFarland’s side are starting to hit some form, but when it comes to Irish derbies, recent history is against them. Ulster have won just one of their last seven derbies, although it was the last time they hosted Munster, almost a year ago.

Munster, meanwhile, will be looking to find some away form, having struggled on the road this season. Last weekend’s loss to Castres leaves them with just two away wins all season, and that has also been an issue in derbies, with a victory over Connacht in Galway in 2016 the last time they got the better of an Irish team on their own soil.

At the same time on Friday, Cardiff Blues (A5) will play host to the Dragons (B6) at the BT Sport Cardiff Arms Park (live on Premier Sports 2, S4C, 19.35) as both sides look to get back to winning ways. The Blues led at half-time in both clashes with English champions Saracens, but could not close out either game, while the Dragons lost away to French leaders Clermont last time out. In their first game since coach Bernard Jackman’s departure, the Dragons will be looking to end a run of eight straight Blues’ victories in matches between the sides.

On Saturday there’s another Welsh derby when the Ospreys (A4) entertain the Scarlets (B2) at the Liberty Stadium (live on Premier Sports 1, eir sport 2, 15.00). The Scarlets head into the game having won 10 straight Welsh derbies, including their last trip to Swansea, but their record on the road this season has seen them pick up just one away win so far. The Ospreys have a formidable home record, with just one defeat in 12 in all competitions, while the last three clashes between the teams have been decided by a total of just seven points.

Later on Saturday it’s up to Scotland where two teams in flying form face off. Edinburgh (B5) and Glasgow Warriors (A1) will meet at BT Murrayfield (live on Premier Sports 1, eir sport 2, 17.15) with both teams having completed European doubles. Edinburgh’s twin successes against Newcastle Falcons included a first away win of the campaign, while the Warriors took nine points from a possible ten against French side Lyon.

Edinburgh have had the better of recent meetings between the sides, with three wins in the last four encounters, and the home team has won every game they have been involved in so far in the Guinness PRO14 season. Glasgow will take plenty of encouragement from their own form though, having won five in a row in all competitions.

On Saturday evening it’s the champions against their 2016 conquerors as Leinster (B1) welcome Connacht (A3) to the RDS Arena (live on Premier Sports 1, eir sport 1, 19.45). Leo Cullen’s side have opened up a gap at the top of Conference B and have lost just two games all season. Their record at home to Connacht is a good one, with just one defeat, in 2002, at home since 1955. However Andy Friend’s team ended an even worse run in Belfast with victory over Ulster, and come into the game off the back of five straight wins in all competitions.

The action continues into Sunday over in Italy when Zebre (A7) host Benetton Rugby (B4) at the Stadio Sergio Lanfranchi (live on DAZN, 15.00, Premier Sports 1, 14.00).

Zebre’s 58-14 win over Enisei in Europe was the biggest in their short history, while the nine tries scored were also a record. They will look to carry that form back into the Guinness PRO14 against a Benetton side who enjoyed a fine win of their own against Harlequins in round three in Europe. Zebre won the last meeting between the two teams, also in Parma, ending a run of four straight Benetton successes. 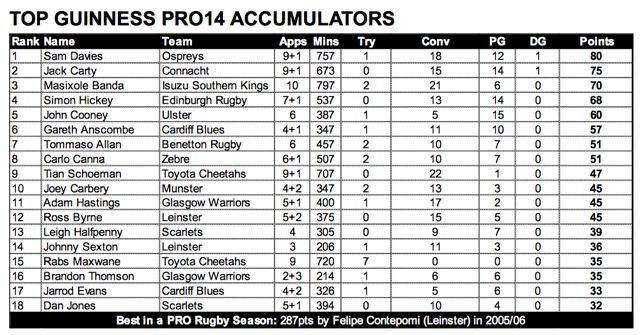