There will be an added intensity in the fight for match points in Round 10 of the Guinness PRO14 this weekend as six of the seven fixtures are in-Conference clashes.

Round 9 provided plenty of drama and action with 48 tries and three games going right to the wire in Belfast, Port Elizabeth and Cardiff. There was also some unique appearances with 17-year-old Dan Babos becoming the first player born in the millennium (March, 2000) when he came on for Dragons during their loss to Leinster.

In addition, Ruaridh Jackson put in an incredible double shift by first appearing as a late replacement in Scotland’s victory over Australia on Saturday before then making his way to Swansea to feature for Glasgow Warriors as they grabbed a bonus-point win over Ospreys. 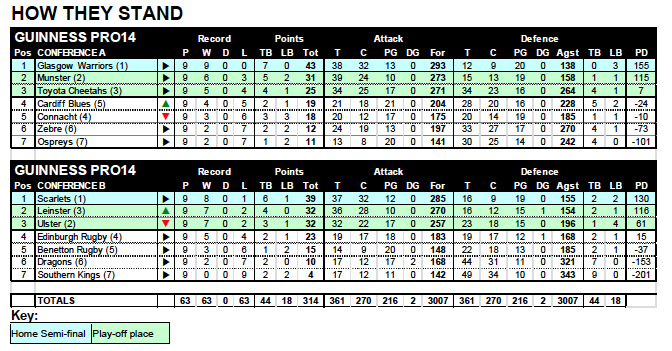 On Friday night the Southern Kings host Edinburgh in Port Elizabeth (SuperSport 1) and the visitors will be on their guard given that Deon David’s side have picked up four bonus points in their last two outings. Edinburgh came up short to the Toyota Cheetahs and will be out to ensure their South African tour returns some valuable points as they aim to stay in the hunt for a Champions Cup Play-Off berth.

Glasgow Warriors face Cardiff Blues in Scotstoun (BBC ALBA) knowing that a win sets them up for a cracking pre-Christmas derby with Edinburgh. Glasgow have won nine games to start the season and two more victories would see them equal Ulster’s record of 11 – the best-ever start to a Championship season in 2012/13.

Dragons welcome Ulster to Rodney Parade (BBC Wales, BBC NI, TG4) buoyed by the news that Welsh international Ross Moriarty will join the region next season. Ulster have been pushed close lately by the Kings and Benetton Rugby and this fixture could be another tight affair where the visitors need the points to ensure Leinster do not usurp them for 2nd place in Conference A.

On Saturday, Zebre host Connacht in Parma (Eurosport, TG4) and with access to their returning Italian internationals they will be hopeful of securing a win that will put them back in contention for a Champions Cup Play-Off spot. Leinster will also travel to Italy to take on Benetton Rugby, who will share the same ambitions as Zebre and this could prove to be a very challenging weekend for the travelling Irish provinces.

Munster meet Ospreys at Irish Independent Park (Sky Sports Action - Channel 407) and the home team need to collect maximum points in order to keep up with Glasgow Warriors who are now 12 points clear at the top of Conference A. Ospreys come into this one off the back of a record defeat at home to Warriors and a shock result in Cork could re-invigorate their season.

Finally, in the only inter-Conference fixture of the round the Scarlets finish their tour to South Africa where they face the Toyota Cheetahs in Bloemfontein (SuperSport 1, S4C) looking to add to their bonus-point win over the Southern Kings. Both teams know how valuable these points are with Cheetahs looking to solidify their hold on 3rd place in Conference A while Edinburgh have a firm grip on the Champions Cup Play-Off berth in Conference B. 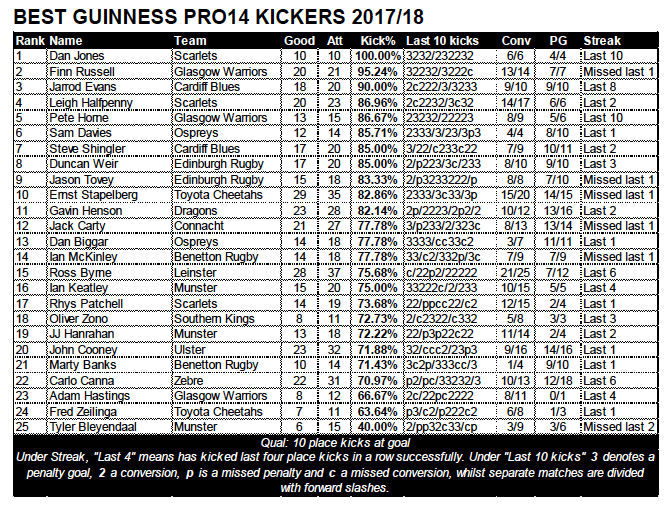 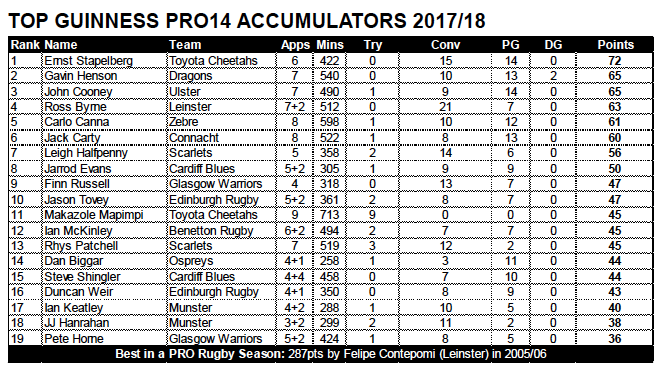 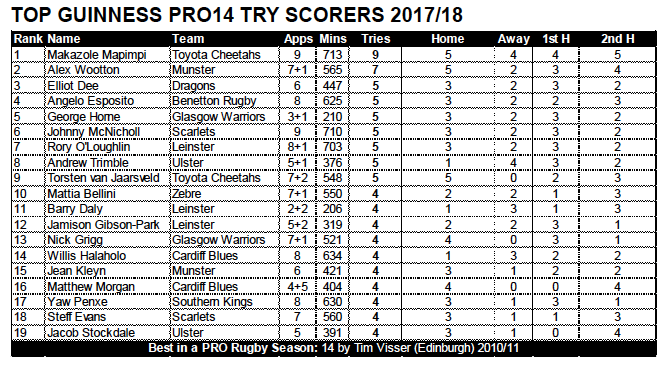