Round 10 of the Guinness PRO14 is swiftly approaching and comes hot on the heels of a weekend filled with plenty of eye-catching results.

Glasgow Warriors and Leinster Rugby continue to play scintillating rugby to top the Conferences, with big Round 9 wins, but just over their shoulders Munster Rugby and Scarlets are maintaining the heat.

The west Walians faced off against Ulster Rugby on Friday night and impressed in a 29-12 win to leapfrog the men from Belfast into second in Conference B, while Toyota Cheetahs and Dragons grabbed their second and third wins of the campaign, respectively. 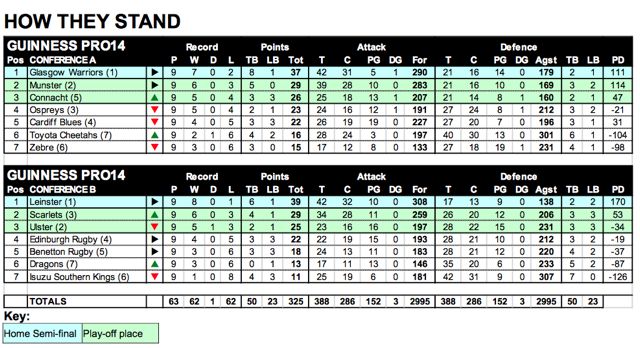 Munster (A2) host Edinburgh Rugby (B4) in a repeat of last season’s intense Semi-Final Qualifier on Friday evening. The match (live on Premier Sports 2, eir Sport 1, 19.35 and SuperSport 2, 21.35) will have to go some to replicate that knockout game from May of this year when Edinburgh came so close to a famous victory but eventually succumbed to a 20-16 defeat.

Friday’s game is to take place at Irish Independent Park and features a home side who have won their last three Guinness PRO14 matches, including last week’s 32-7 victory at Zebre. Edinburgh lost out to Dragons 18-12 in Round 9 and will look to transfer their home form – where they’re four from four – into a winning away performance.

Ospreys and Zebre both won in Round 7 but have fallen to defeats in the subsequent two rounds and will fight out an intriguing battle. Wing Hanno Dirksen has scored in the last two for Ospreys and will be keen for a hat-trick but Zebre will put up a fight, welcoming back their large contingent of Italy players for the encounter.

On Saturday there’s a cross-Conference, mid-table match-up on the cards that sees Ulster Rugby (B3) welcome Cardiff Blues (A5) to Kingspan Stadium (live on Premier Sports 1, eir sport 2, 15.00). Both teams are looking to bounce back from Round 9 defeats to push their way up the Conference tables and look well- matched opponents having drawn the last time this fixture was played in Belfast (24-24 in April 2017).

The Blues lost out at Glasgow Warriors 40-15 last time out, with Jarrod Evans and Kristian Dacey touching down, while Dave Shanahan and Jonny Stewart both scored tries in Ulster’s 29-12 defeat to Scarlets.

Also at 15:00 GMT on Saturday there’s a fixture between two teams on the rise. Toyota Cheetahs (A6) and Connacht (A3) have both won twice in the last three rounds and come together in Bloemfontein (live on SuperSport 2, 17.00, Premier Sports 2 and eir sport 1, 15.00).

Daniel Maartens was the hero for Cheetahs last time out as his double helped sink Benetton Rugby 31-25, with the South Africans just pipped by Munster in Round 8 (30-26) and overcoming the Blues 21-10 in Round 7. Connacht, meanwhile, have been impressive in their last two, downing Dragons 33-12 at the start of November and defeating the Isuzu Southern Kings 31-14 at the weekend, with fly-half Jack Carty delivering a man-of-the-match performance.

Dragons (B6) are at home once again in Round 10 and will look to take down Conference leaders Leinster (B1) at Rodney Parade on Saturday evening (live on Premier Sports 2, eir sport 1, 17.15).

Jared Rosser’s double edged Dragons to the win over Edinburgh last time out and the Welsh region are a force to be reckoned with at home, losing just one of their last four Guinness PRO14 matches at Rodney Parade – 23-15 to Blues in Round 6. Seven different try-scorers helped Leinster to a 52-7 victory over Ospreys on Friday; the men from Dublin have won their last seven Guinness PRO14 matches but have also won just once in their last four visits to Wales.

Since downing Glasgow Warriors in round four at home, it has been a tough time for the Kings who have lost five in a row in the league. Their Italian visitors are also in something of a rut, they have only won one of their last seven in the Guinness PRO14 and that was against the Kings at home in round 6, a comfortable 28-5 success. But the Italians will welcome back their internationals this weekend and hoping for a first away win since the opening round of the season.

Pick of the round – Glasgow Warriors v Scarlets

All eyes will be on Scotstoun on Saturday night when two of the Championship’s top sides in Glasgow Warriors (A1) and the Scarlets (B2) face off (live on Premier Sports 1, S4C, eir sport 2, 17:15). And revenge is on the menu for Dave Rennie’s side who were brought crashing down to earth by the Welsh region on the same ground in last season’s semi-final.

Scarlets remain the last team to win here in the Guinness PRO14 – indeed Glasgow have won 14 of their last 15 Championship clashes at home. But the Welsh side will need to halt their poor away form – they only have won once the road all season – and Scotstoun is a hard place to end a slide.

The Warriors have only lost twice in the first nine rounds of games to open up an eight-point lead in Conference A and after Niko Matawalu inspired them past the Cardiff Blues last time out, they are looking to head back into Europe on a high. 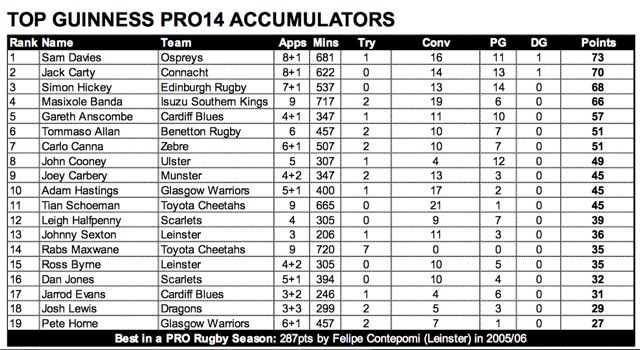 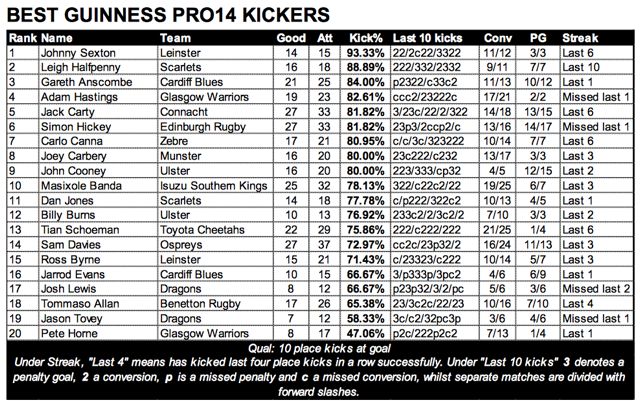