The Guinness PRO14 is under way after Round 1 saw the Championship kick off in flying style across Ireland and Wales.

The Toyota Cheetahs and the Southern Kings from South Africa made their bows in the Championship and their attacking approach has already won them plenty of admirers. With five clubs making their first appearances on home soil across Ireland, Scotland and Italy this weekend every country bar South Africa will have had its taste of Guinness PRO14 action before the Cheetahs and Kings kick-off their home campaigns in Round 3.

The action begins on Friday night when Leinster Rugby host Cardiff Blues in Dublin where the two teams played out a thrilling game at the RDS last season scoring three tries apiece. The result went right to the wire with Leinster managing to claim a 22-21 victory after some incredible counter-attacking play from Cardiff Blues threatened an upset in the Irish capital.

Elsewhere on Friday night, Richard Cockerill will get his first experience of Championship action at Myreside fresh from Edinburgh’s win over Cardiff Blues. Bernard Jackman’s Dragons are the visitors to Edinburgh and the Welsh side will be looking to bounce back from their opening-round loss to Leinster.

Saturday’s games sees both South African teams complete their initial mini-tours to the northern-hemisphere with Munster Rugby welcoming the Cheetahs to Thomond Park while the Southern Kings visit the wild Atlantic coast to take on Connacht Rugby in Galway.

Benetton Rugby and Zebre Rugby Club make their first appearances on home soil this weekend with Ulster Rugby and defending champions Scarlets travelling to Italy. Benetton will be eager to improve on their defeat to Munster while Zebre put in a resolute display away to Ospreys in Round 1 and will want to back that up against Scarlets.

Pick of the Round: Glasgow Warriors v Ospreys

On paper this looks like a fixture that could occur at the Guinness PRO14 Final with both of these teams boasting robust title credentials. Glasgow Warriors secured a durable win in Galway last weekend in their first game under head coach Dave Rennie and they will have the backing of a capacity crowd at Scotstoun.

Ospreys found life difficult at times against Zebre in Round 1, but the keen finishing ability of Keelan Giles ensured that they claimed victory at Liberty Stadium. Giles is a superb young talent whose breakthrough into the first team last season was marked by seven tries in 13 starts. Steve Tandy’s men have a reputation for growing stronger as the season progresses and a win in Scotland would send a clear signal about their intent to win a fifth Championship title. However, the Warriors have title ambitions of their own and this promises to be a cracker in front of the Sky Sports cameras. 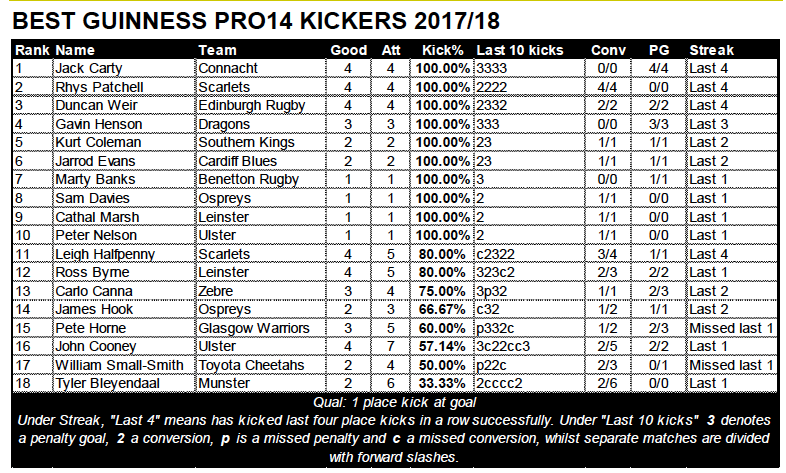