With just one round to go in the regular season, every game counts in the Guinness PRO14 – here’s a round-up of what’s going across the Championship this weekend.

The stage is set for the final round of the regular season with so much still to play for in the Guinness PRO14. Munster Rugby and Glasgow Warriors will fight for top spot in Conference A, three teams in Conference B still have a chance of reaching the Guinness PRO14 Final Series and a place in the Champions Cup Play-Off game is on the line when Cardiff Blues host Ospreys at Judgement Day.

This Saturday features a full slate of derby games which gives teams and fans plenty to shout about and for teams who finish up their campaigns on Saturday their stars have a final chance to impress the international selectors ahead of the Rugby World Cup. The Guinness PRO14 Final looms large on the horizon with the game taking place at Celtic Park on May 25. 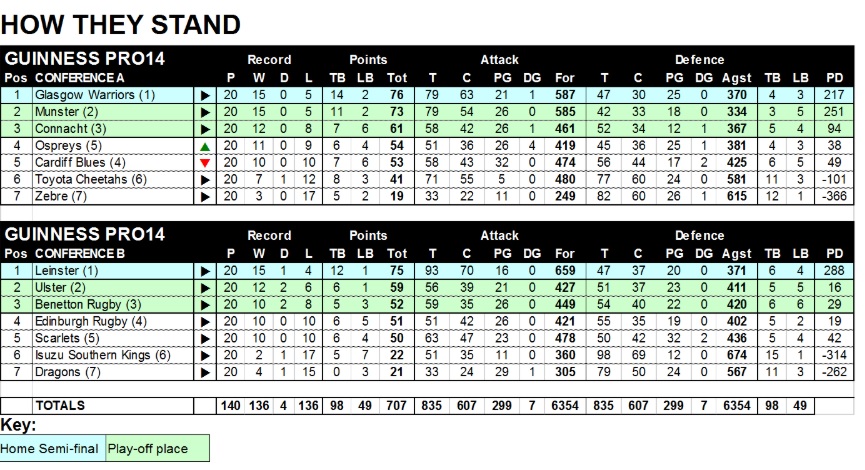 It’s all on the line at Judgement Day as Cardiff Blues go toe-to-toe with Ospreys in the cathedral of Welsh Rugby – Cardiff’s Principality Stadium. With just one point splitting the teams in 4th and 5th place in Conference A, the winner will advance to the Champions Cup Play-Off game and will be guaranteed to have home advantage as long as the game does not end in a draw.

The Premier Sports cameras will be there to catch every second of the action in the Welsh capital in what promises to be a firecracker of a regional derby.

Regardless of how this one finishes, Edinburgh will end the day still in possession of the 1872 Cup having beaten Glasgow Warriors twice this season – including a 16-8 victory over their hosts at Scotstoun in December. But both teams are in vital need of a win in this fixture. Success for the Warriors means they will host the winner of the Ulster v Connacht Quarter-Final at Scotstoun which would leave them just 80 minutes away from playing a Guinness PRO14 Final in their own city.

For Edinburgh, not even victory would guarantee them a place in the Guinness PRO14 Final Series, but it would secure their spot in the Champions Cup Play-Off. Lose, however, and it is likely that Scarlets will gazump them into the Play-Off or even the knock-out stages should Benetton slip up against Zebre. While all this is going on, Munster will be playing Connacht at Thomond Park hoping to take advantage of an Edinburgh win by nicking the home Semi-Final berth in Conference A.

What’s At Stake Elsewhere in the Guinness PRO14?

The first game of Round 21 kicks off at 15:00 live on Premier Sports 1 in Cardiff at Judgement Day with Dragons (A7) playing for derby pride against a Scarlets (B5) team being led by head coach Wayne Pivac for the final time in the regular season before he departs for the Wales job. Scarlets know a bonus-point win will secure a Champions Cup Play-Off spot against either Cardiff Blues or Ospreys and could even sneak the 2017 champions into the Guinness PRO14 Final Series should Benetton fail to win in Parma.

The final all-South African duel of the campaign takes place in Bloemfontein between Toyota Cheetahs (A6) and the Isuzu Southern Kings (B6) at 16:30 UK / 17:30 SA live on SuperSport, DAZN and Premier Sports social media channels. Both sides will want to sign off the season with a win, but the Cheetahs are keen to build momentum ahead of the Currie Cup as they look to re-establish themselves as play-off contenders in next season’s Guinness PRO14.

In Parma, Zebre (A7) host Benetton Rugby (B3) at 17:00 UK / 18:00 Italy live on DAZN, Premier Sports 2 and Free Sports with history on the line with the visitors aiming to become the first Italian team to reach the knock-out stages of the Guinness PRO14. A bonus-point victory guarantees Benetton an away Quarter-Final against the runner-up from Conference A but Zebre’s international contingent will be focusing on impressing the international selectors with the World Cup only a few months away.

First plays second in Conference B as Ulster (B2) face Leinster (B1) at 17:15 live on Premier Sports 2, eir sport 1 and DAZN with both teams already assured of home fixtures in the Guinness PRO14 Final Series. The game will be Leinster’s final hit-out ahead of the Champions Cup Final on May 11 with Ulster already set to take on Connacht in a Final Series Quarter-Final on Saturday May 4.

Kicking off in tandem with Glasgow Warriors and Edinburgh, is Munster (A2) versus Connacht (A3) at Thomond Park live on eir sport 1, Premier Sports 2 & DAZN at 19:35. Connacht have made their return to the knock-out stages for the first time since claiming the Championship title in 2016. Head coach Andy Friend will be eager to retain momentum for their trip to Ulster the following week when they go head-to-head for a Semi-Final place. Munster, however, will have their target set on a Bonus Point win to ensure they can make the most out of anything that occurs in Scotstoun in their favour. 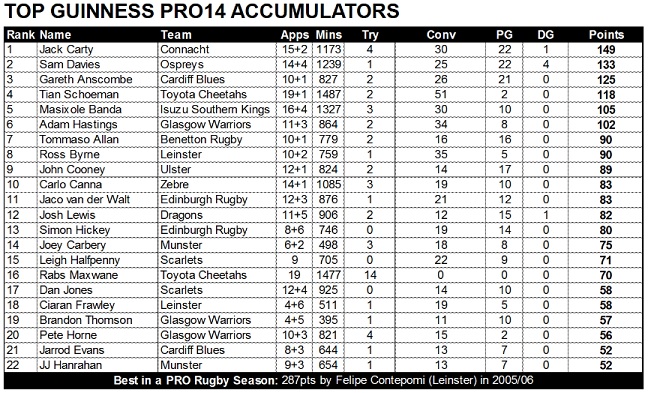