With just two rounds to go in the regular season, every game counts in the Guinness PRO14 – here’s a round-up of what’s going across the Championship this weekend.

Last weekend saw the rare occurrence of two draws out of the seven Guinness PRO14 matches in Round 19. On Sunday the Isuzu Southern Kings and Dragons played out a tie in Port Elizabeth while Benetton Rugby struck on the last play of the game to earn a draw with Leinster. The later result, coupled with Ulster’s loss to Glasgow Warriors and Edinburgh’s win at Scarlets as kept the battle for second place in Conference B wide open.

In Conference A, Glasgow and Munster are still well clear of the chasing pack, but even Ospreys have an outside chance of pipping Connacht and Cardiff Blues to the Final Series depending on performances in the final two rounds. Particularly as the Connacht and Cardiff Blues face each other this Saturday afternoon while Ospreys and the Blues meet in Round 21. The focus is narrowing on the Guinness PRO14 Final on May 25, which will take place at Celtic Park. 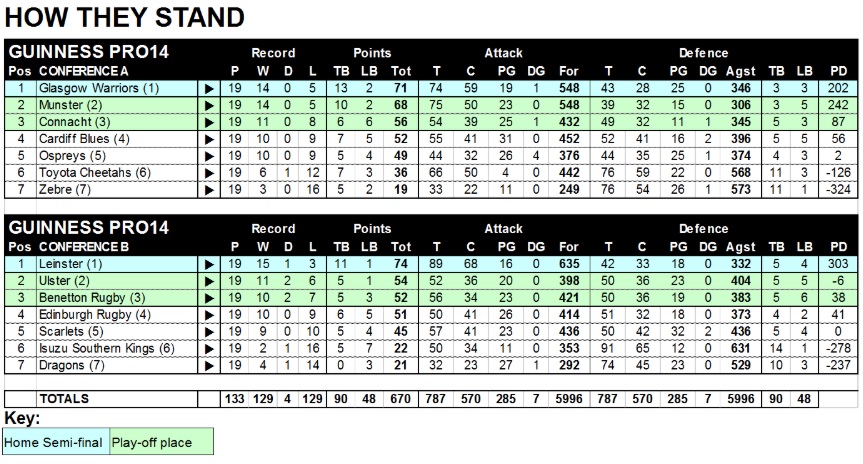 The weekend kicks off with Isuzu Southern Kings (B6) hosting the Ospreys (A5) at the Madibaz Stadium (live on Premier Sports 2, Super Sport 6, DAZN 18:35 UK/19:35 SA). The South African side sit just a point clear of the Dragons at the foot of the Conference B table, this Friday evening match likely being their best chance of distancing themselves further from the wooden spoon position. Their final match of the 2018/19 Guinness PRO14 season sees a South African derby at the Cheetahs’ home of Toyota Stadium in Bloemfontein. Ospreys still have an outside chance of a Final Series spot, five points this weekend a necessity to keep their hopes alive, they then play Blues on Judgement Day at the Principality Stadium on Saturday 27th April.

The other Friday night kick off sees Benetton Rugby (B3) v Munster (A2) at Stadio Monigo (live on DAZN, Eir Sport social media channels and Free Sports, 18:00 UK / 19:00 Italy). Benetton Rugby travelled home from Dublin with mixed emotions after their last gasp draw at the RDS Arena on Saturday in a game they really could have and should have won. Munster were the highest scorers of Round 19, putting 45 past the Cardiff Blues backline. Munster still have a chance of replacing Glasgow at the top of Conference A, with second spot already confirmed. Benetton have only beaten Munster three times in 15 meetings, but this weekend’s meeting arguably has the most importance on it, a win for the home side and an Ulster loss could take Benetton parallel with Munster in second place in their own Conference.

Saturday sees a battle of the top two as Leinster (B1) host Glasgow Warriors (B1) (live on Premier Sports 1, eir Sport 1, DAZN 15:00). Leinster have confirmed top spot and a Home Semi-Final on the weekend of May 18/19 whilst Glasgow still have Munster gunning them down for that same privilege. Leinster are up 21-12 in the head to heads between these two great sides, but Glasgow prevailed 31-21 at Scotstoun in November. Leinster have stumbled a little since sealing top spot, drawing at home to Benetton on Saturday, having lost at Edinburgh the round before. Glasgow know they have to keep on winning as they have done in their most recent three fixtures.

Scarlets (B5) play Zebre (A7) still with an outside chance of making the Final Series from Conference B, but will need other results to go their way as well as near maximum points from their final two fixtures (live on Premier Sports 1, eir Sport 2, DAZN 17:15). This is more than realistically attainable with Scarlets fortunately playing the two bottom sides in their final Guinness PRO14 fixtures of the regular season. Helping this, too, is the fact that Zebre have never beaten Scarlets in 11 previous meetings, just the one draw the best they have managed. Scarlets won 41-10 in September.

Toyota Cheetahs (A6) host Dragons (B7) in the only Saturday night kick-off this weekend (live on Premier Sports 1, Super Sport 1 & CSN, DAZN 19:35). Neither side can qualify for the Final Series, but Dragons have the incentive of overtaking the Kings at B6 to not finish bottom of Conference B. The Cheetahs will especially want to take winning momentum into their final game – the South African derby to close out the season on a high. 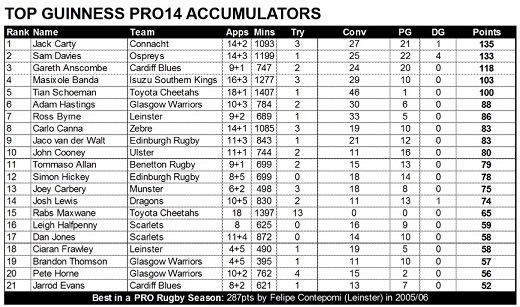 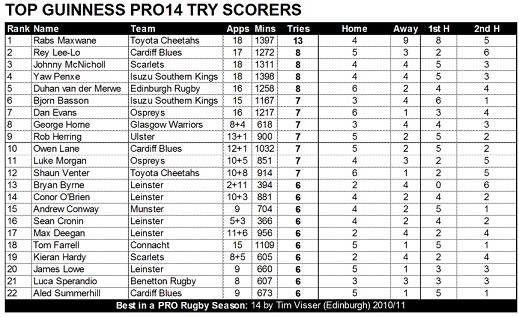