If you’ve got a question about the new PRO14 championship then we should have the answer for you here.

Question: Why are South African teams joining the Championship?

Answer: Since the tournament’s beginnings in 2001 as the Celtic League, the tournament has always thrived as a cross-border competition and expanding the Championship is in keeping with its DNA.

By bringing in the Toyota Cheetahs and the Southern Kings and expanding into new territories, the Championship will attract more interest from broadcasters and sponsors while ensuring that we have elite level teams making the Guinness PRO14 even more competitive on the field. This agreement will benefit all of the teams who compete in the Guinness PRO14 and allow those clubs eligible for European competition to be better resourced to thrive at that level.

A: A home and away league system with 14 teams would be impossible to fit into the allocated playing weekends in a season. Across European rugby and soccer none of the major cross-border tournaments (Champions Cup, Champions League) use a league system, rather, they opt for pool and knock-out stage formats which bears many similarities to the new conference system. In this case, the conference system allows the tournament to expand without the need to add extra games into an already congested international calendar.

Q: How will this work and what changes will occur to the Championship format?

A: The Guinness PRO14 will adopt a two-conference model which will allows for the new clubs to be added into the Championship without needing to add extra rounds in 2017/18. 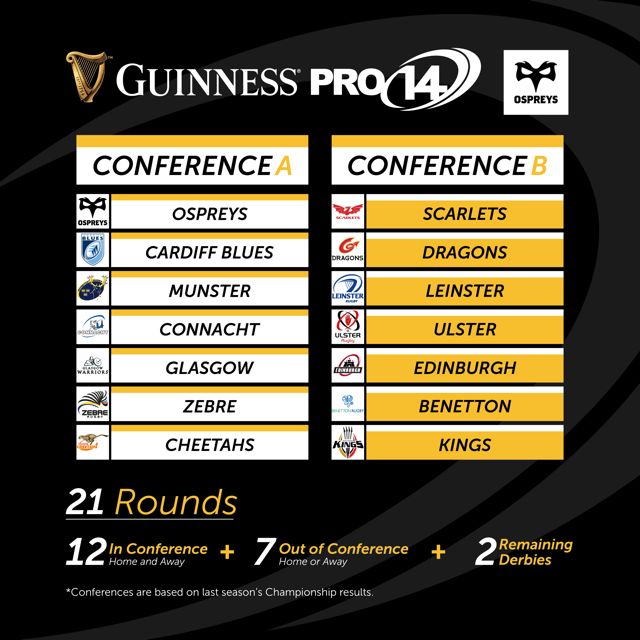 Q: How many matches will my team play?

A: The regular season will consist of 21 Rounds which is one game less than the previous format. These Rounds will be made up from a combination of:

Q: Will my team still play all of their usual Derby games?

A:  Yes. Extra Derby rounds have been added to the season to ensure the games that matter most to our fans are protected.

Both Ireland and Wales will see each of their four teams complete full home and away fixtures.

In Italy, Scotland and South Africa each of their two teams will play three Derby fixtures.

(The home venue for the third fixture will alternate each season is the same fashion as fixtures in the Six Nations.)

Q: Will my team play extra away games?

A: No, each team will play either less or the same amount of away games as they did in the old league format depending on how they are drawn against teams from their opposing conference.

Q: How are Home OR Away fixtures against the other Conference decided?

A: The number of away games played by a team against opponents from the other Conference will switch each season. Teams will play either 10 or 11 away games per season, so for example, if Scarlets play 11 away games in 2017/18 then the goal when putting together the fixture list in 2018/19 will be to ensure they play 10 away games.

The initial balance of away fixtures was predicated on a number of factors including: stadium availability; club preference; player welfare and the accommodation of mini-tours involving fixtures with South African clubs.

Q: How were the Conferences decided?

A: The Conferences need to fulfil two criteria. First, there must be an equal number of teams from each union in both conferences. Secondly, there must be a competitive balance based upon the previous season’s final placings that feed into union rankings.

To create an equal number of teams per union each conference will contain:

Additionally, for the entrance of the South African teams their Super Rugby final placings were used for ranking. The Cheetahs are ranked 1st having finished 2nd in the African 1 Conference. 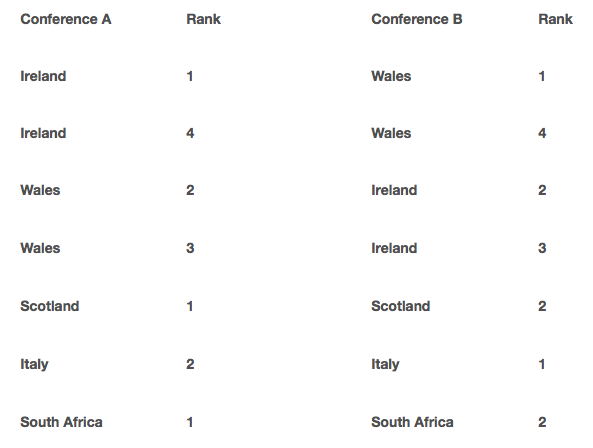 Each union will rank their teams based upon their points totals from the previous season’s Championship table.

For example, in 2016/17, the four Welsh teams finished with the following points totals: 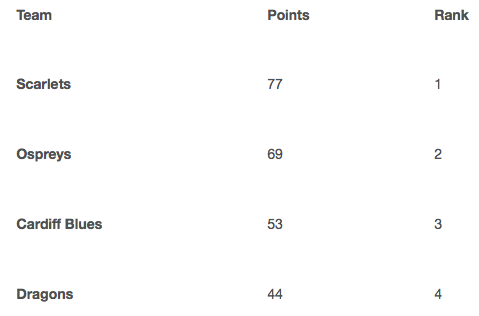 Q: Does this mean that the Conferences will change from year to year?

A: Yes. The number of teams by union will remain constant in each conference, but in order to ensure a competitive balance the teams will then be distributed evenly based upon their union ranking from the season before.

Final placings are also determined by the order in which teams progress through the Guinness PRO14 Final Series. For example, in 2016/17 Scarlets finished 3rd in the table, but ended up as Championship winners so their ranking is 1st  (see above).

Q: How will the Guinness PRO14 Final Series work?

A: After all 21 regular rounds have been completed the top 3 teams from each conference will qualify for the Final Series. Both 1st placed teams will secure home Semi-Finals while the 2nd and 3rd placed teams will face each other in a Quarter-Final Stage.

Q: What are the benefits of the new format?

A: This new chapter will be the most exciting one yet in the history of the Championship. The expansion of the Guinness PRO14 Final Series will mean even greater competitiveness to every single game in the Championship. This means that six of the 14 teams will have something to fight for once the regular season is over and this will make the tournament more unpredictable than ever before.

The new format also ensures that our Derby matches, which are integral to the tribal attraction of the Championship, are protected. In short, there are more matches, more opportunities and more to play for across the same number of weekends (24: 21 regular rounds; 3 knock-out rounds).

The addition of the Toyota Cheetahs and Southern Kings makes the Guinness PRO14 a truly global rugby tournament by expanding the reach for competing teams and paving the way to bring professional club rugby to new territories around the world.