Take a look at what’s in store in Round 9 of the Guinness PRO12.

The Guinness PRO12 Championship season continues to go from strength-to-strength as Round 8 saw all 12 clubs maintain the record-setting pace when it came to scoring tries.

Already 247 tries have been scored in 47 games which averages out at over five tries a game and supporters are clearly reacting to the action on the pitch with an increase in attendances reported this season as well as a 25% surge in broadcast viewers.

After Round 8, four-time title holders Leinster Rugby have cemented their place at the top of the Championship table with a bonus-point win over Zebre Rugby where Adam Byrne scored a hat-trick of tries. The province are three points clear of their oldest rivals Munster Rugby, who are second, while the chasing pack includes four former title winners in Ospreys Rugby, Glasgow Warriors, Ulster Rugby and Scarlets.

A number of intriguing fixtures take place this weekend starting with Cardiff Blues’ trip to face Connacht Rugby in Galway. Danny Wilson’s men are looking to recover their form after falling off in recent rounds against a Connacht side desperate to get themselves back in the hunt for a top-six place.

Ulster Rugby will look to arrest their three-game losing streak when they host Zebre Rugby while Scarlets entertain Leinster Rugby with the Welsh region eager to continue their run of victories at Parc y Scarlets.

With Autumn internationals taking place this weekend Munster Rugby will take on Zebre Rugby in Thomond Park on Saturday while Newport-Gwent Dragons go up against Edinburgh Rugby on Sunday. The Welsh-Scottish clash comes after both sides upset Irish provinces (Connacht and Ulster) in Round 8.

Ospreys Rugby travel north to take on Glasgow Warriors under the lights at Scotstoun in front of the Sky Sports cameras. The 2012 champions take on the 2015 winners with both clubs level on points in third and fourth place, respectively, and they are only separated by virtue of Ospreys having scored more tries (37 to 27).

Ospreys should turn up with some of the star performers from the Guinness PRO12 season with full back Dan Evans 2nd in the Opta Stats for metres made (546) and he is also in the top five for Clean Breaks (10). Joining Evans in the backline should be Ben John who has the most Defenders Beaten in the PRO12 with 27.

Meanwhile, Glasgow Warriors could hand a debut to winger Ratu Tagive, the former NRL player from Australia, who has arrived at the club last week. 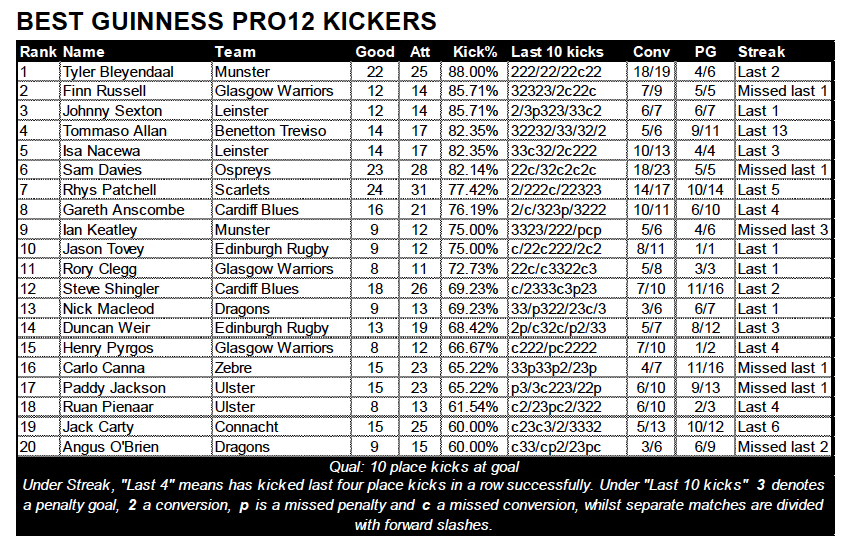 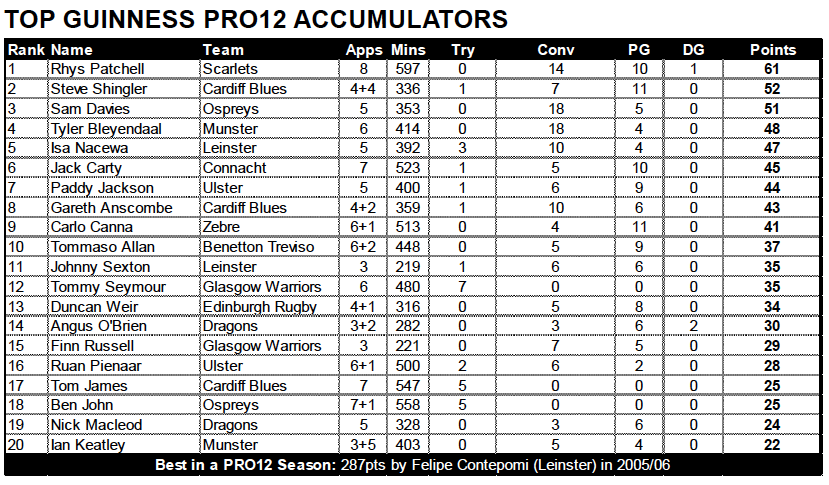