An exciting start to the season has been backed up by tries with 118 scored across the first four rounds of play which is seven more than at this point last season. This exciting play is drawing in the crowds, too, with attendances for like for like games in 2015/16 also up by 24.5% during Round 4.

Only Ulster and Cardiff Blues have maintained their undefeated starts to the season and both of those teams will put their records on the line against Ospreys and Leinster Rugby, who sit in third and fourth place, respectively.

Scarlets and Benetton Treviso collected their first wins of the season last weekend  which leaves just Connacht Rugby and Zebre Rugby as the only clubs without a victory to their name so far.

With each passing round the intensity has cranked up across the Championship and Glasgow Warriors, Scarlets, Leinster Rugby, Edinburgh Rugby and Zebre Rugby all face tricky away games in Round 5.

Newport-Gwent Dragons will be looking for their second win of the season as Glasgow Warriors aim to get back to winning ways after successive losses.

Defending champions Connacht Rugby entertain an improving Edinburgh side, who have won on two of their last four visits to Galway, while Scarlets will have to put an end to Benetton Treviso’s three-game winning streak at home to the Welsh regions.

Cardiff Blues will host Leinster Rugby on their artificial surface at BT Sport Cardiff Arms Park and the fast pitch should produce an exciting game between the sides who have combined to score 27 tries already this season.

Ulster Rugby have not won a Championship title since 2006 and an unbeaten start to the season will have buoyed their ambition to get to the Guinness PRO12 Final on May 27, however, Ospreys will be determined to rebound from their loss to Leinster Rugby in Round 4.

Some of the most exciting firepower in the Championship will be on display with Charles Piutau, Stuart Olding, Jared Payne (Ulster) and Josh Matavesi, Jeff Hassler and Ben John (Ospreys) all appearing in the key Opta attacking categories. 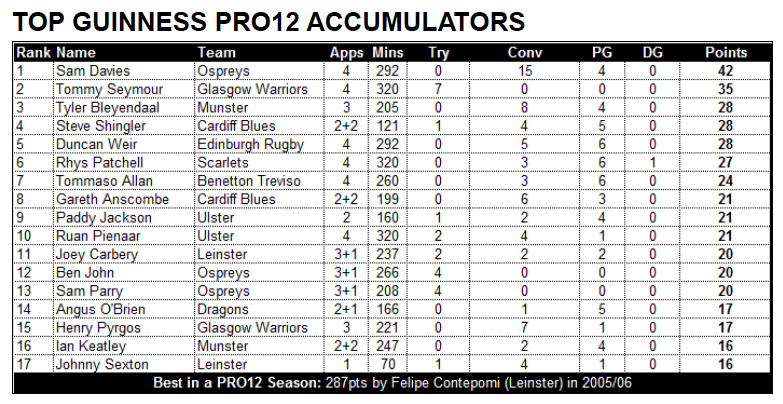 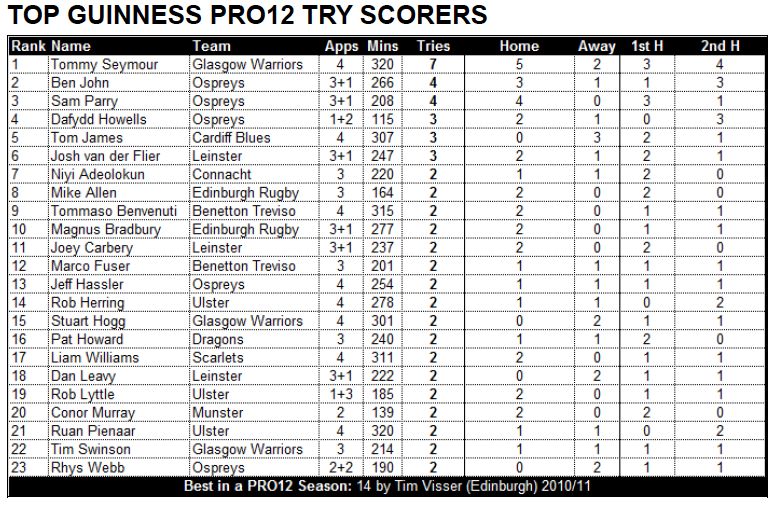