The second Guinness PRO12 ‘Big Weekend’ arrives in Round 7 and looks set to cap off a massive month of high-stakes rugby as the Championship recommences after two weeks of European action.

The Guinness PRO12 clubs have made a strong start in both the European Champions Cup and Challenge Cup with six clubs – Leinster, Munster, Ulster and Ospreys, Cardiff Blues and Edinburgh – all topping their pools in their respective continental competitions.

Carrying on from Round 6 where a record 45 tries were scored the Guinness PRO12 clubs have shown attacking intent in Europe as they have contributed 81 tries in just 23 fixtures. Wins against non-PRO12 opposition in both tournaments has backed up the top-class rugby seen in the Championship this season with PRO12 teams winning five of the nine fixtures against teams from other leagues.

This weekend will see the resumption of more familiar rivalries with derby games fixed for Ireland and Wales as part of the Big Weekend concept.

Ulster Rugby’s unbeaten start to the season finally came to an end in Round 6 where they met a resurgent Connacht Rugby side who used their interprovincial victory as a springboard into the European Champions Cup where they won their first two games.

Back in the Guinness PRO12 the fiercely competitive race to reach the Championship decider at Aviva Stadium on May 27, 2017 sees just four points separating the top six teams while Connacht Rugby and Scarlets are looking to regain lost ground after a slow start to season.

Connacht will visit Leinster Rugby at the RDS Arena but they have not won in the Irish capital since 2002 while Scarlets travel to the Welsh capital to take on Cardiff Blues having picked up three wins in their last four fixtures against the other regions.

Home records will be a big strength this weekend with Cardiff Blues having suffered just one defeat in almost three years to the other regions, Leinster are 18 games unbeaten at home in the PRO12 while Ospreys have racked up 31 tries in all competitions at Liberty Stadium this season. 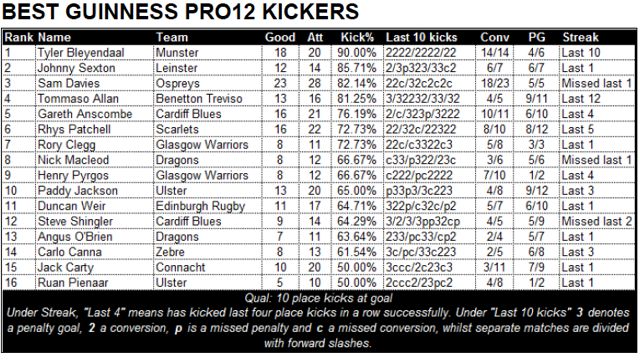 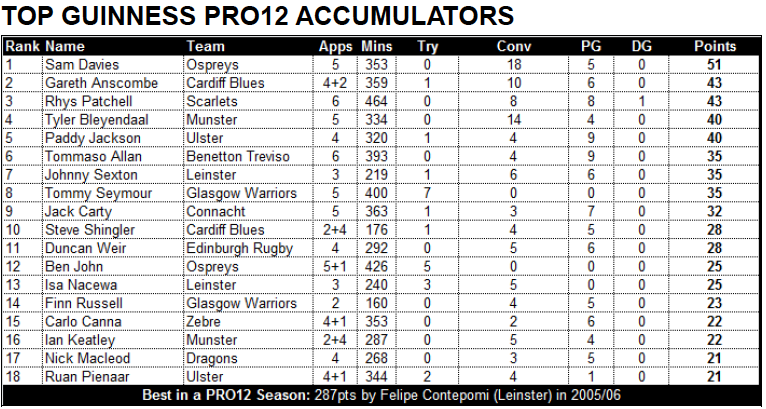 Ospreys Rugby have won their last three matches, the most recent two taking them to the top of their pool in the European Challenge Cup.

Ospreys have won all four home games at Liberty Stadium this season in all tournaments, tallying 31 tries and conceding just five.

Ospreys only defeat in their last nine encounters with fellow Welsh regions was 16-25 at home to Scarlets in March.

Newport Gwent Dragons’ only victory in their last six matches was 37-16 at home to Brive in the European Challenge Cup.

Dragons have lost their last four Guinness PRO12 encounters since beating Zebre at Rodney Parade in round 2. They have not won away from home in the Championship since a trip to Treviso in March 2015.

Dragons most recent success over a fellow Welsh region in the PRO12 came on a trip to Cardiff on Boxing Day 2014.

Ospreys have won their last nine fixtures against Dragons since their neighbours to the east won by a single point at Rodney Parade on 6 January 2012. Dragons’ only previous victory at Liberty Stadium was 21-16 in October 2010.