Gruff on win over Dragons

Backs Coach, Gruff Rees, has declared himself “reasonably satisfied” after an injury ravaged Ospreys side got back to winning ways with a bonus point victory at Rodney Parade on Friday night.

Jeff Hassler, Rhys Webb, Dan Evans and Sam Underhill all crossed the whitewash as the Ospreys recorded a ninth successive Guinness PRO12 win against the Men of Gwent, and Backs Coach Rees admitted that it had been a pleasing response from the squad.

“We can be reasonably satisfied, in terms of what we came here to do” he said.

“There was positive intent from both sides, I thought the attitude was good across the board, and there was some exciting rugby played there.

“We had the balance of the game for a large part of the first hour, around some set piece work, but also, I liked the momentum of the carrying game from people like Cracknell and Underhill, really giving us some go forward. The backs were then able to complement that, so that balance was better than it’s been.

“It was anxious stuff at the end. We’ve been brittle in defence on occasion and we need to get back to what I expect of an Ospreys team. We’ve been vulnerable at certain points, not just this week, across the season, so I’m pleased that we had to withstand that pressure at the end and seen an element of character come through in the group. That’s a nice little step forward, seeing young men like Thomas, Otten, Thornton together on the pitch at the end.” 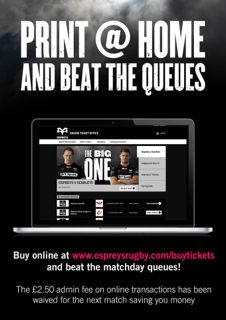 Recent results mean that the Ospreys’ hopes of a top six finish are hanging by a thread, but with three games to go Rees says that the region will refuse to throw the towel in:

“In terms of the season, and where we are, it’s forlorn hope perhaps in what we are chasing, but we will chase. We wanted to come here, fully respectful of the Dragons and the players they’ve got, the fire power they’ve got, we thought we could get ourselves a good brand of open rugby today if we got our platform more effectively than we did last week. I think we got that right.

“Three games to go, we will chase, we’ll be positive. It’s a two-week lead in to Treviso, a home game at the Liberty, and we’ll enjoy the momentum hopefully from this game. Three bonus point wins certainly is the goal, we’ve spoken about 20 points. We have looked at the fixtures and, if truth be told, Munster, Edinburgh, they could stretch us, but we’ll be hot on their heels whatever.”

The Ospreys went into the game with a growing injury list in double figures, even before the late withdrawal of James King and Eli Walker, but Rees found the positives in adversity.

“We are getting to our bare bones really” agreed Rees.

“There are high profile people not in the squad and then over the last 24/48 hours we’ve had three internationals pull out of the side for tonight, Paul James was originally named, then Eli Walker and James King today. People are stepping up though. We’ve got youngsters coming in, Cracknell and Underhill again, Beard, Owen Watkin, Thornton has come in today on the bench with Gareth Thomas, and they’ve done good jobs. Then during the game, we lose people like Jeff Hassler early on, Brendon Leonard comes om at openside because of Sam Underhill and we just dig in.

“This internal competition can only make us bigger and stronger for the future, not withstanding the little dip where we are at this moment in time.”