The Ospreys missed out on a place in the last eight of the Champions Cup as Exeter secured top spot in Pool 2 on an incredible afternoon of final day drama.

The visitors knew that a win of any kind at Sandy Park would have seen them progress into the quarter-finals on a day when all four teams in the group retained a chance of topping the pool.

For the Chiefs, it was more convoluted as they needed to secure a bonus point win while sending the Ospreys home empty handed, and needing Bordeaux to upset the odds at Stade Marcel Michelin and defeat Clermont Auvergne. However, having won their last six home games in European competition with a try bonus, including impressive demolitions of the two French teams this season, they went into it believing they could get the result they wanted.

The afternoon got off to the worst possible start, the Ospreys falling behind to the first try of the afternoon in only the third minute.

Preparation at Llandarcy during the week would have been all about preventing Exeter’s rolling maul from building up any momentum, but after Scott Baldwin was penalised for not rolling away, Gareth Steenson put the ball up close to the Ospreys line, from where a driving maul was halted illegally.

A quick tap and go from close range had the visitors in trouble and it was no surprise when Kai Horstmann was driven over to score, the conversion from Steenson successful.

The Ospreys weren’t trailing for long though as within five minutes it was all square. Dan Biggar’s kick had put Exeter back into their own 22, and after Jack Yeandle’s throw was deemed not straight, the Ospreys attacked from the scrum. First, Brendon Leonard was stopped a couple of metres out after attacking up the blind side, before Dirksen was able to barge his way over the try, Biggar converting.

However, Exeter were able to score their second try almost immediately, a scything run through midfield by Michele Campagnaro had the Ospreys in all sorts of trouble, the prolific Thomas Waldrom eventually stretching over from close range. Steenson’s conversion meant Exeter led 14-7 with just 10 minutes played.

After that dramatic opening the contest settled down, with Exeter enjoying the upper hand with the advantage of a strong Sandy Park wind at their backs.

A reshuffle was needed on 21 minutes, Dirksen off injured to be replaced by Sam Davies who went to full back with Dan Evans going to the wing, while skipper Alun Wyn Jones headed down the tunnel at the same stoppage under the HIA protocols, Rory Thornton entering the action for three minutes before Jones returned having had the all clear.

The Chiefs continued to ask questions of the Ospreys defence, looking to work their big ball carriers into dangerous positions where they could drive to the line but the visitors were able to hold their line firm despite a lengthy spell of pressure in their 22.

Thornton then returned to the action on the half hour mark, this time as a permanent replacement for the injured Lloyd Ashley.

An Exeter overthrow on the Ospreys 10m line allowed the visitors to make inroads, James King carrying to the opposition 22. He had Leonard on his shoulder in support but a man and ball tackle from Phil Dollman as he collected the offload saw the scrum half knocking on and the chance was gone.

As a physical contest continued, neither side was able to assert their authority and the teams went in at the break with the score unchanged. 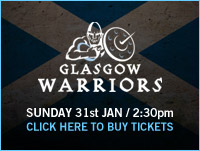 With the wind behind them, the Ospreys needed a good start to the period and a sniping half-break from Leonard took the visitors close before an Exeter infringement on the ground handed Biggar the simplest of three points right in front of the posts to cut the deficit to four.

Eight minutes after the restart the Ospreys were reduced to 14 men following a flag from the touch judge following a late hit on Waldrom as Exeter looked to work their way out of their 22, Scott Baldwin the man who was shown yellow.

At the next scrum, Evans was brought off from his position on the wing, allowing Sam Parry to pack down, and within minutes the Chiefs had taken full advantage of the extra man out wide, James Short reading Steenson’s chip perfectly to collect a bouncing ball at full pelt and race clear of Davies and Justin Tipuric. Steenson’s conversion was off target but the home team led 19-10.

Biggar then tried his luck from half-way, his penalty dropping agonizingly under the cross bar, but the Ospreys were boosted by the return of Baldwin and Evans for the final quarter.

However, they were back under their posts again in the 65th minute, Short being released up the left by Dollman to race home from 30m out for his second, and Exeter’s fourth. Steenson’s touchline conversion meant the hosts led 26-10.

With nine minutes remaining the Ospreys then took full advantage of a penalty on halfway. Biggar kicked to the corner and as the Ospreys pack rumbled towards the line it was brought down illegally, leaving the referee no option other than to award a penalty try. Biggar added  the two points in front of posts to make it 26-17 as news started to filter though from France that Bordeaux were ahead and a losing bonus point might be enough for the Ospreys to progress.

That gave the Ospreys fresh momentum but their efforts were in vein as Exeter had the final say, Waldrom unstoppable from close range, Will Hooley converted.

At the end there was disappointment for the Ospreys in contrast with the celebrations in the stands as, with Exeter’s players back in the changing room,  realisation dawned that they had topped the most competitive of pools, three teams tied on 16 points, with big spending Clermont just a point behind, all four teams having won three, lost three.