45 teams from 14 clubs will compete at a sold out EuroFest tag event at BT Sport Cardiff Arms Park ahead of the Challenge Cup quarter-final against Stade Francais .

Hosted in conjunction with Cardiff Blues at BT Sport Cardiff Arms Park on Sunday 2nd April, the festival will see hundreds of U7,U8,U9 and U10 players enjoying a fun packed afternoon of rugby before they head next door to the Principality Stadium to cheer on the Ospreys against the Parisian giants with a place in the last four of the Challenge Cup at stake.

EuroFest will support the WRU’s Half a Game initiative, launched last year to encourage and grow participation among younger children, guaranteeing game time for all young players.

The success of EuroFest had handed a huge boost to the region in preparation for their big game which gets underway at 5.45pm, with the matches on the Blues’ 3G playing surface at the heart of the special supporters village which has been set up especially for the travelling Ospreys contingent after the game was switched from the Liberty Stadium.

The action at the Arms Park supporters village kicks off at 2pm with EuroFest getting underway on the pitch and the club house open for business, providing a convenient meet-up point for those heading to Cardiff.

With food and drink available, you can support the youngsters as they enjoy their tag festival before live entertainment gets underway in the club house from 4.30pm.

There will also be an appearance from non playing squad members and a Q&A ahead of kick-off to help you get in the mood for what promises to be a memorable 80 minutes of European rugby.

The clubs confirmed for EuroFest, making up 40 teams in total on the day are:

There was further good news today with confirmation that the 2003 Club hospitality offering has sold out for this game. However, there remains a limited number of spaces available in the President’s Lounge, offering supporters the chance to enjoy the finest hospitality at an iconic venue for just £65 +VAT per person. 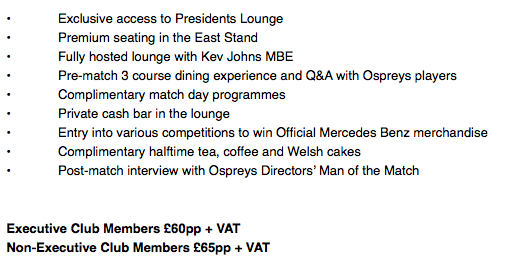 To secure your place in the President’s Lounge, you need to contact the hospitality team at the Ospreys on 01792 616488 or email hospitality@ospreysrugby.com before close of play on Monday (27th March).