The European Rugby Champions Cup and Challenge Cup tournaments will take centre stage once again this weekend when the 21st season of European professional club rugby explodes into action.

The Champions Cup which will feature some of the world's greatest players gets underway tomorrow when two-time tournament winners, Leicester Tigers, clash with reigning French champions, Stade Francais Paris, at Welford Road live on BT Sport and beIN Sports.

The European kick-off is set for this evening when three-time Challenge Cup champions, Harlequins, face big-signing Montpellier at the Twickenham Stoop live on Sky Sports and beIN Sports.

The journey for the clubs will culminate next May when both the 2016 Challenge Cup and Champions Cup finals are staged at the state-of-the-art, 59,000-capacity Grand Stade de Lyon. Tickets for the showpiece matches are currently selling fast via eprcugby.com

Built on 20 years of outstanding matches and passionate support from millions of fans across Europe, EPCR's streamlined tournaments with 20 clubs in five pools will deliver the sort of intensity which is rarely experienced in other global club rugby competitions. 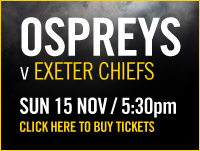 RC Toulon, who completed an historic hat-trick of titles last season, open their Champions Cup campaign against Bath Rugby at Stade Félix Mayol on Sunday, and last season's Challenge Cup winners, Gloucester Rugby, are into action on Saturday when they face Zebre Rugby at Kingsholm Stadium in Pool 4.

More history will be written on Saturday when Enisei-STM become the first Russian club to compete in a European rugby tournament. Enisei host Connacht Rugby, who have made the long journey to Siberia, in the Challenge Cup at the Central Stadium in Krasnoyarsk with the game kicking off at 8.00am (Irish and UK time) on Saturday.

At the conclusion of this season, there will be no play-offs for the 20th place in the Champions Cup with the winner of the Challenge Cup securing an automatic spot in the 2016/17 tournament.

In addition, emerging and established clubs alike will have an important opportunity to shine in the Challenge Cup Qualifying Competition which features three teams from Italy as well as representatives from Belgium, Germany, Portugal, Romania and Spain. At the conclusion of the competition, two clubs will qualify for the 2016/17 Challenge Cup.

EPCR Director General, Vincent Gaillard, said: "Last season's inaugural tournaments were a great success, and we are ready, along with the competing clubs and all our stakeholders, to build on that success. In tandem with the strengthening of our commercial programme plus additional measures to protect the integrity of our competitions, we will be delivering high-quality tournaments for both loyal and new fans.”

With EPCR's Executive fully operational from its base in Neuchatel, Switzerland, the organisation's commercial programme continues to gain further momentum. Turkish Airlines have recently been announced as an Official Partner of the tournaments, and Tissot are now the Official Timekeeper and Watch of the tournaments.

All Champions Cup games will be broadcast live or delayed each weekend in the UK, Ireland and France by BT Sport, Sky Sports, beIN Sports and France Televisions with games also shown in Italy by Sky Italia. Radio coverage will be delivered in the UK and Ireland by BBC Radio 5Live, RTE and Newstalk.

Finallly, with the objective of further protecting the integrity of its competitions, EPCR has committed extra resources to Anti-Doping with more games covered and testing taking place at matches in Italy for the first time while perimeter publicity at stadiums across Europe will feature the Keep Rugby Clean message.

Sportradar will also be analysing all betting on matches in the Champions Cup and Challenge Cup on behalf of EPCR in order to detect any suspicious odds movements across the broadest range of betting operators in the European market.