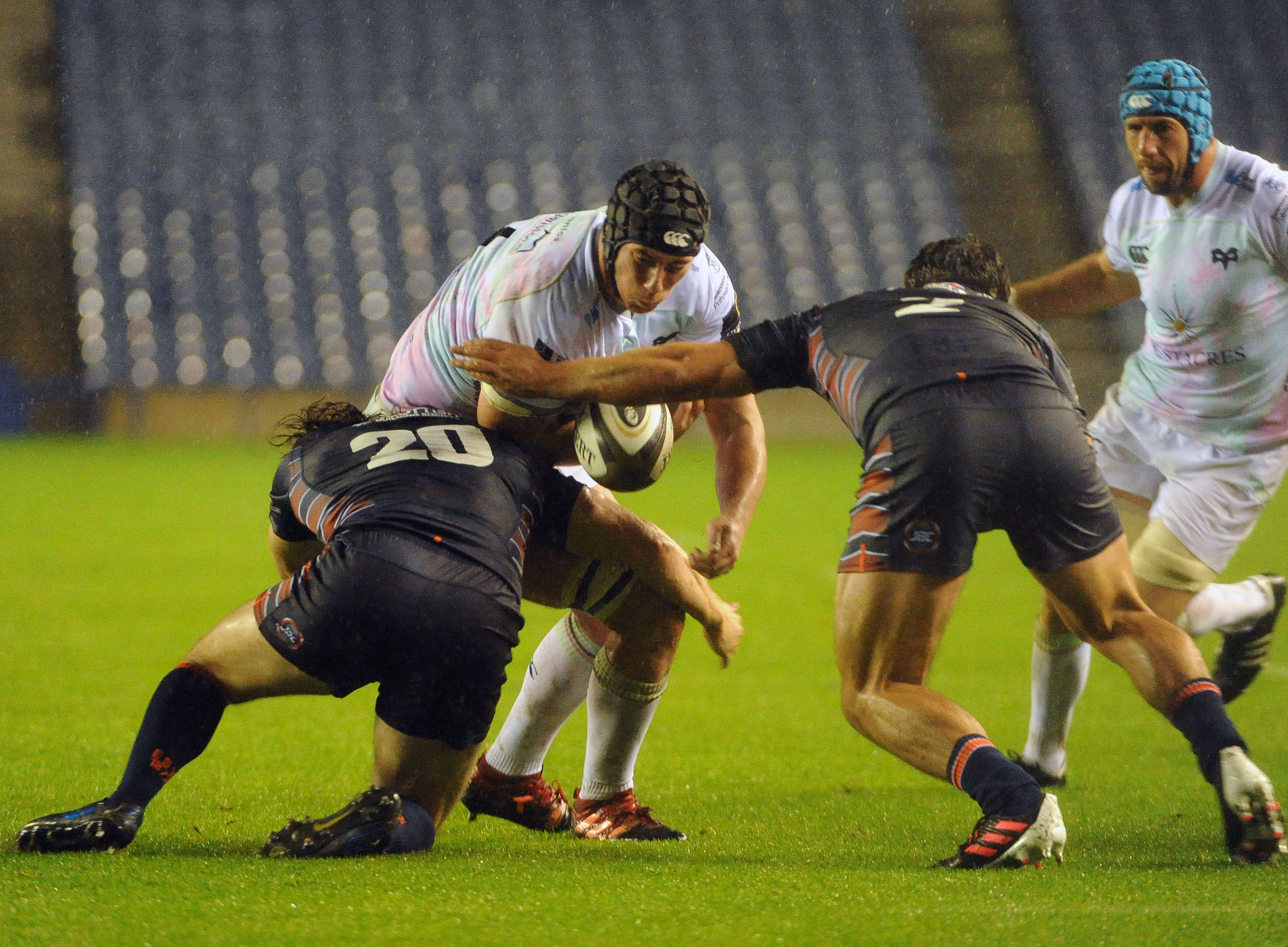 Edinburgh had been battered by rain all day ahead of the Ospreys’ first Guinness PRO14 clash of the 2020/21 season against the hosts. It made for tricky conditions for any free-flowing rugby, but there was no lack of physicality between the two sides.

The opening ten minutes of the first half was a test of aerial ability, as the two sides repeatedly sent the ball high into the air to challenge their opposition in horrendous conditions. However, after a line break leading to a penalty try for the home team, the game came to life with Ospreys bullying their way over the try line for their first try. The second was a fluid counterattack, with Ospreys centre Kieran Williams leading the charge and setting up winger Mat Protheroe for his first try of the season. Ospreys outside half Stephen Myler converted both and notched up a further six points from the boot to take his side into a thirteen-point lead, narrowed to ten following a last minute penalty by Edinburgh’s Jaco van der Walt.

The second half started much the same as the first, and it took a little over thirteen minutes for the Ospreys to strike again. Scrumhalf Webb peeling off the back of a trundling maul to draw in the Edinburgh defenders before floating a pass out to Protheroe who still had work to do to get the ball over the try line.

That would be it in terms of scoring for the remainder of the game, but the Ospreys never relinquished control, the defence never buckled, and aggressive play, strong carrying, and clever kicking kept Edinburgh nailed down in their own half. The game ended with one last spark that unfortunately came to nought. However, a real statement made by Ospreys with a dominating performance over Edinburgh at BT Murrayfield in the driving rain.

Toby Booth, Ospreys Head Coach
“We’re trying to demand a level of effort and of unseen work. I think we saw a lot of that from everybody."
Full report

Kickers on either side of the halfway line tested each other under the high ball for the opening ten minutes. It was Edinburgh who made the first assault on the line, however, and only a fingertip intervention from Ospreys openside and captain Justin Tipuric prevents the try. However, referee Andrew Brace deems the offence worthy of a yellow card, and Edinburgh are awarded a penalty try.

A moment later, Ospreys blindside flanker Olly Cracknell was flipped onto his head at the breakdown by lock Grant Gilchrist of Edinburgh, and the big Scot was instructed to join Tipuric in the sinbin.

Ospreys opt for an attacking lineout and outside half Stephen Myler gave them a platform just five metres out. The forwards hammered away at the line, working hard to gain territory inch by inch, and eventually they power over the line, with Ospreys loosehead Nicky Smith coming away with their first try of the game.

A period of sustained pressure by the Ospreys forced several handling errors by Edinburgh, and following a scrum from a fumble, the visitors won a penalty. Myler stepped up and added three points to his tally.

A wonderful counterattack from deep by the Ospreys, as Cracknell gave scrumhalf Rhys Webb the ball who in turn threw a long pass out to centre Kieran Williams. The young centre showed the ball one way, and burst through a gap! Williams, with options on both sides, fed the ball to winger Mat Protheroe, who carved his way past the final defender to score!

The attack was continuous from the Ospreys, and yet another penalty attempt from Myler was successful, taking the Ospreys up to 20 points.

Edinburgh made headway through the defence in the last minutes of the half, and Edinburgh outside half Jaco van der Walt gets his name on the scoreboard after his third attempt at goal.

It was a similar start to the first half, with both sides again probing away at each other. It was the Ospreys who took the initiative, however, pinning Edinburgh into the corner and forcing a turnover. The forwards hammered away at the gates and eventually, a dummy run and a gentle pass from scrumhalf Webb to Protheroe on the wing broke through and the youngster from Swansea claimed his second of the evening.

Myler, attempting the conversion from the left touchline, missed his first.

As the game entered its final quarter, the Ospreys had their tails up and played aggressive rugby, keeping Edinburgh pinned in their corner and suffocated the life out of them.

A last throw of the dice to earn a bonus point yielded no reward, as the ball was fumbled into touch, but the Ospreys were convincing victors, nonetheless.

Speaking after the game, Toby Booth was pleased with the win in poor conditions:

“I’m delighted. It was really important to cement some of the stuff we’ve been working on in preseason. It was good to get a result away from home against a really good team. It’s a good benchmarking opportunity, we’ll see how much we can transfer. To a man, everyone aimed up and rolled their sleeves up on what was a pretty grotty night. It wasn’t going to be pretty it was about winning the arm wrestle.

“We’re trying to demand a level of effort and of unseen work. I think we saw a lot of that from everybody. Then you add on some quality and high profile moments, some people who are learning their trade. The back three boys were under assault aerially, but they came up well. We found a way to win in difficult conditions.

“The encouraging thing is, from a team that was inconsistent last year, the first thing the captain said to me when he came off was that he was disappointed he didn’t get a bonus point.  That shows the attitude of the group, they’re hungry to improve and work hard and keep improving. It’s a good start, we need to reflect on what’s happened and get ready for another big challenge coming next week.”