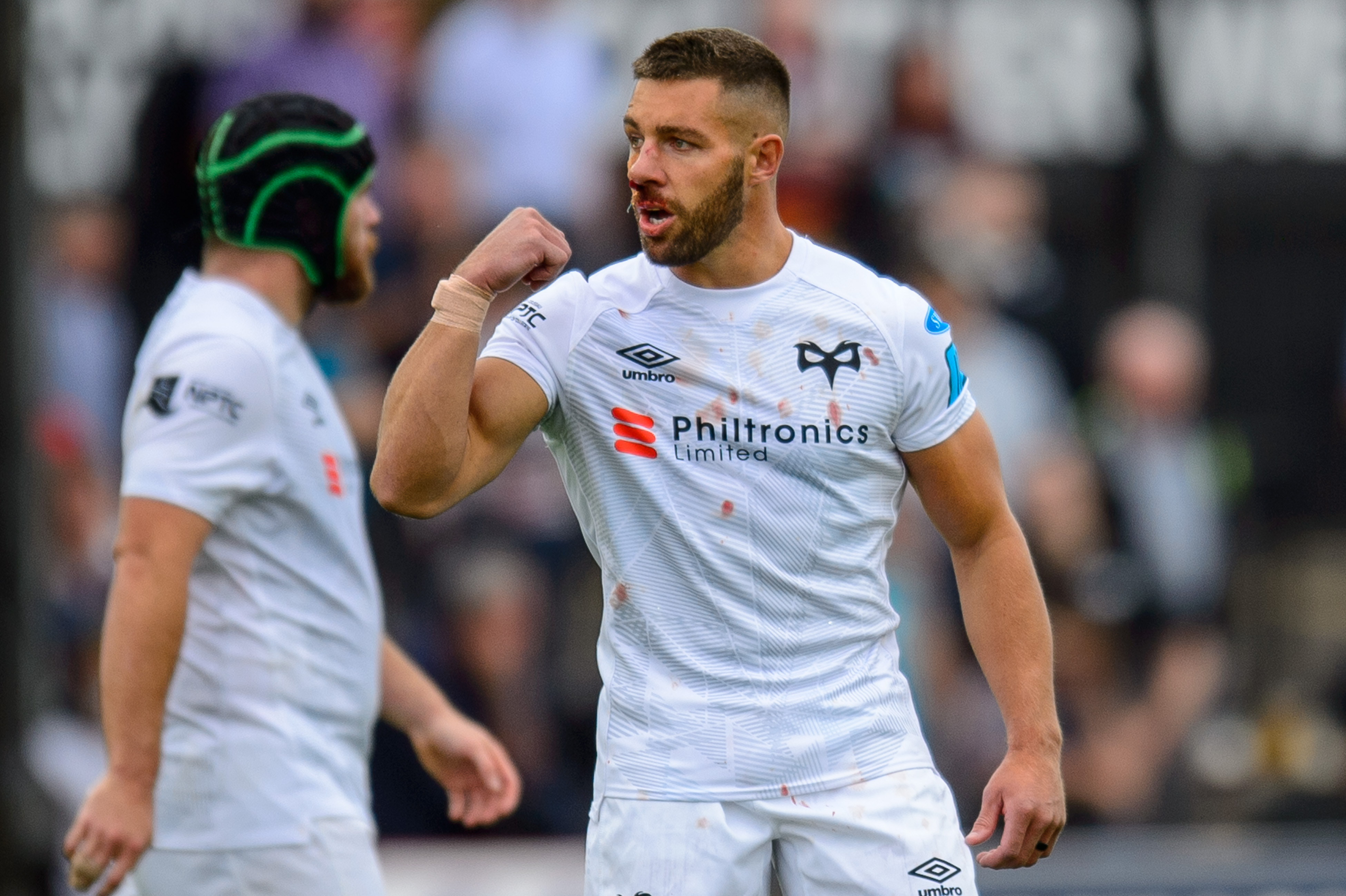 It was the moment Ospreys (and Dragons) rugby fans had been waiting for; the return of competitive rugby with a stand full of supporters. Ospreys had donned their white kits once more for their United Rugby Championship debut at Rodney Parade.

The Dragons and Ospreys have nurtured a healthy rivalry of late, with both sides getting the better of the other in recent encounters.

It was the hosts that landed the first blow of the day with Dragons’ outside half Sam Davies setting up fullback Josh Lewis for the early try. The outside half kicked a further 11 points that half to give his side 16 points in the first half. Ospreys struck back through centre Michael Collins, hitting a beautiful line to scamper over, while outside half Gareth Anscombe doubled the score with a conversion and a penalty.

Michael Collins with a great darting run for a debut try for @ospreys! ⚫

Toby Booth, Ospreys Head Coach
"We grew up a bit in the second half and we trusted each other and that bodes well when difficult moments come along"

The Ospreys hit the ground running in the second half and the pressure told after just a few minutes as Anscombe knocked over a penalty to narrow the deficit to a single score. But two Ospreys tries courtesy of centre Collins and winger Luke Morgan took the boys in white into the lead; and despite a late breakaway try from the Dragons’ scrumhalf Rhodri Williams, the Ospreys claimed victory  having kept the hosts pinned in their half in the dying minutes of the game.

Toby Booth, Ospreys Head Coach
"We want to make that place a fortress and the supporters are an important part of it.”

Dragons got onto the front foot early with a charged down box kick yielding possession for the hosts and a penalty from a collapsed scrum gave them an attacking platform inside the Ospreys’ 22. From the resulting territory, Dragons got the bit between their teeth and fullback Lewis picked up a chip through from outside half Davies to score between the posts. A positive start for the Dragons as the outside half knocked over the conversion to give them a 7-0 lead in the 6th minute.

Ospreys’ Will Griffiths stole a bit of momentum with some aggressive counter rucking being rewarded with a penalty, but the penalty was reversed after the TMO’s intervention. Referee Sam Grove-White agreed with the decision and Owen Watkin received a yellow card for allegedly tipping Dragons’ flanker Ollie Griffiths beyond the horizontal during a clear out. The penalty was converted into points off the tee and the Dragons pulled further ahead 10-0 after 12 minutes.

A huge scrum from the Ospreys sent the Dragons pack into reverse gear before their front row were forced to pop up and concede a penalty.  From the lineout, the Ospreys began hammering away at the defence and a storming angle from debutant Collins saw the centre bust through and beat the last man to score the Ospreys’ first try of the day. Anscombe converted the score, bringing the Ospreys back within three at the end of the first quarter, 10-7.

The Dragons won back possession from the restart, however, and a penalty allowed Dragons’ Davies to notch up an additional three points and extend their lead to 13-7.

Ospreys’ penalty count started to rack up, giving the Dragons easy opportunities to have a go at the try line. Wave after wave of Dragons attackers couldn’t penetrate the line, so the hosts opted for a drop-goal, adding another three points to their lead to make it 16-7 with a little under fifteen minutes left of the first half.

The visitors made decent territory with a break downfield, and the Dragons yielded a penalty which Anscombe knocked over for three points; six points separated the two sides once more.

One last outrageous effort from the Ospreys nearly yielded a late try in the half, but the final pass to speedy winger Luke Morgan was deemed forward and the referee blew his whistle for half-time.

Ospreys came out firing in the second half, and within four minutes, Anscombe had shaved another three points from the deficit.

It took ten minutes for the game to open up and a floating kick was re-gathered by the magician that is Mat Protheroe, playing on the wing for the Ospreys. The speedster made acres of territory and the Dragons had to concede a penalty to stop the Ospreys from scoring, and centre Jack Dixon was shown a yellow card.

A few threatening phases from the visitors yielded their second try as Collins once more cut in on fine angle to dive over the whitewash. Anscombe was accurate with the boot, and the Ospreys enjoyed the lead for the first time as they went 16-20 ahead after thirteen minutes.

Dragons’ Josh Lewis converted the first 50:22 of the day, but it was instantly turned into an Ospreys advantage as the overthrown line was collected by Ospreys hooker Sam Parry, who thumped the ball down field, hunted down opposition winger Jonah Holmes, and won the penalty turnover. Unfortunately the Ospreys couldn’t capitalise on the positional advantage but maintained their four-point lead as the game entered it’s final quarter.

The next score was a thing of beauty as replacement centre Tiaan Thomas-Wheeler made half a break before offloading to Anscombe; the outside half showed good pace to break away from the defence and found winger Morgan on the left wing who was far too quick for anyone and streaked away to score the Ospreys’ third of the day. Anscombe wasn’t trouble by the angle and the visitors extended their lead to 16-27 with sixteen minutes remaining.

Ospreys showed some intelligent play as the game entered it’s last ten minutes; with effective tactical kicking and staunch defence not giving an inch. However, Dragons’ scrumhalf Rhodri Williams found a huge gap at the base of the ruck and gave his side a fighting chance as the hosts go back within four points with just minutes remaining.

The clock was red as the two packs tussled in the scrum just outside the Dragons’ 22, but the Ospreys pack shunted forward against the head and won a penalty to end the game in the lead 23-27.

A hard fought victory for the visitors and a player of the match performance from Ospreys debutant, Michael Collins.

Toby Booth spoke with Premier Sports after the game:

“We won but we weren’t at our best.

“We were very calm at half time. We grew up a bit in the second half and we trusted each other and that bodes well when difficult moments come along.

“The exciting thing for me is it is the first time I’ve seen an Ospreys crowd. If we can create an atmosphere at home, it’s exciting for the boys. We want to make that place a fortress and the supporters are an important part of it.”

Help Booth build a fortress and cheer on the new era of Ospreys with a 2021/22 season membership. It's not too late to get your hands on one ahead of the second Welsh derby, Ospreys v Cardiff Rugby, Saturday 2 October.