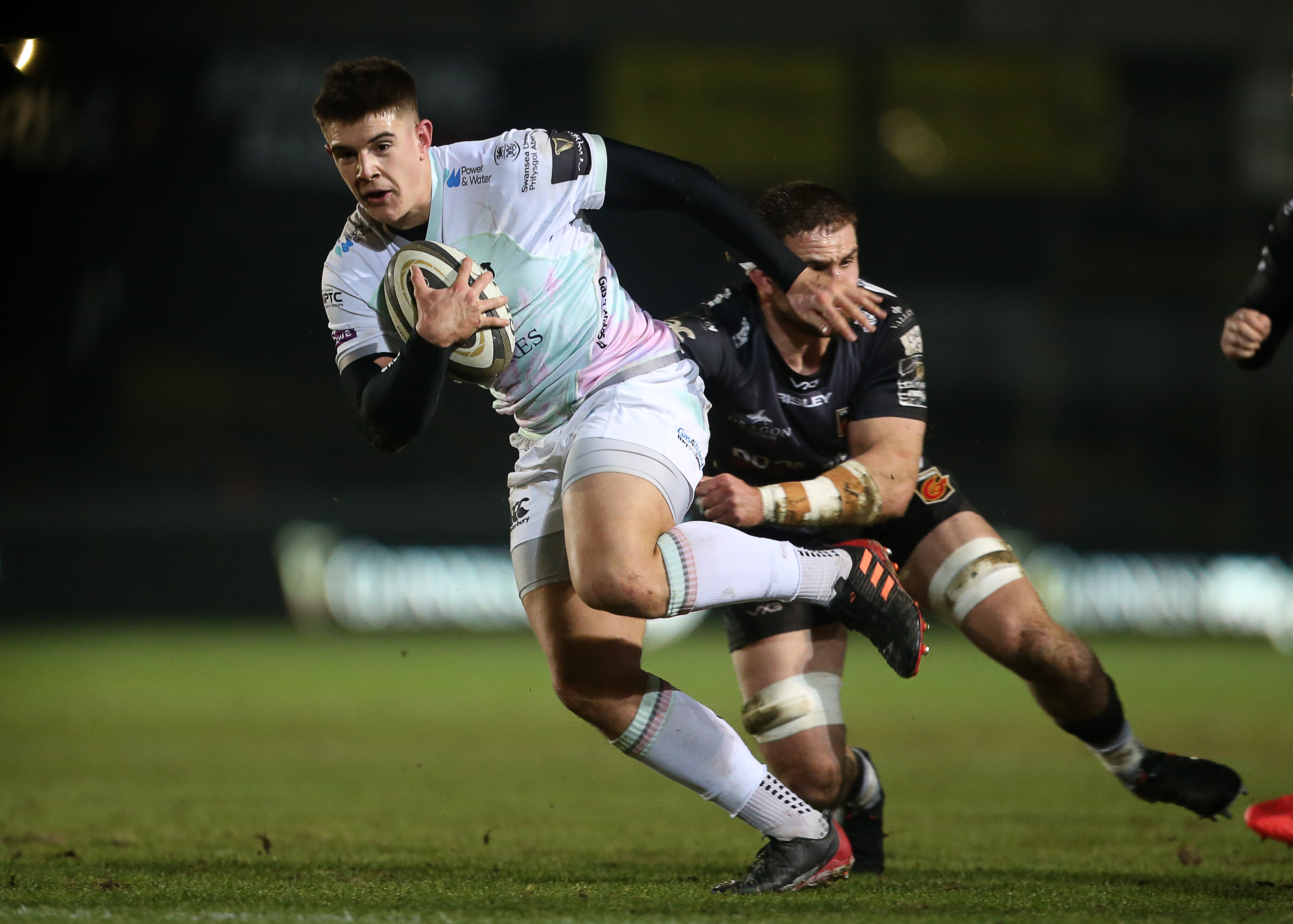 Toby Booth’s Ospreys were fresh from an uplifting victory over Cardiff Blues on New Year’s Day, and would be in search of a second victory of 2021 against the Dragons at Rodney Parade.

Ospreys outside half Stephen Myler and Dragons outside half Josh Lewis exchanged penalties early in the game, before Dragons winger Jared Rosser crossed for the first try of the game. Lewis’ touchline conversion was impressive and gave his team a seven point lead. However, the Ospreys struck back through fullback Mat Protheroe, crossing in the left corner with another outstanding touchline conversion, this time from Myler, levelling the scores. Myler added another three points to his team’s tally just before the half-time whistle.

Lewis drew the scores level on the hour mark, and a breathless five minutes followed as winger George North crossed for the Ospreys, and centre Jamie Roberts barrelled over for the Dragons; both tries converted by their respective outside halves.

Myler broke the deadlock with ten minutes left on the clock, but the final moments belonged entirely to the Ospreys, with a dominant pack allowing hooker Scott Otten to score and secure the game.

Stephen Myler
“It was an honour for me to captain the side, and on another day, we might’ve gotten that bonus point at the end.”

A lightning break from Ospreys wing Luke Morgan caused chaos in the defence and the Dragons scrambled to regain control in defence. No release in the tackle gifts Myler a three pointer, giving Ospreys the lead after nine minutes.

Less than five minutes later, Dragons respond, with quick ball and powerful carries, a penalty at the breakdown allowed Lewis to level the scores from the tee.

On the 22nd minute, Morgan was shown a yellow card for a deliberate knock on. Dragons took immediate advantage down the wing, and Dragons’ Rosser got over in the corner to give his side the lead for the first time. Lewis’ conversion from the touchline was a beauty, curling between the upright. A double blow for Ospreys and their supporters, as centre Keiran Williams departed the field to undergo a HIA (head injury assessment). 18-year-old Joe Hawkins came on to replace him.

A penalty kick to the corner gave Ospreys an attacking platform, and following a powerful surge from the forwards, hooker Ifan Phillips released the ball onto Protheroe waiting on the wing in the absence of Morgan. The speedster couldn’t be caught as he crossed the line. A spectacular touchline conversion from Myler drew the score level once more.

A break from the replacement centre Hawkins set Ospreys up for another assault on the line, and with a penalty going their way, the visitors opted to take the three points ahead of the interval.

Five minutes into the second half, it was the Dragons who has possession inside Ospreys’ 22, and they opted for a lineout instead of taking the easy three points. Stoic defence from the visitors kept the Dragons out time and time again, and eventually turned the ball over with a heroic maul defence.

Ospreys centre Owen Watkin was pinged at the ruck for going off his feet, and Dragons’ Lewis brought the game level once more at 13-all.

A superb try from the set piece for the Ospreys moments later gave them a short-lived lead. From the lineout, Myler passed to North, who fed Watkin on a great line, broke through the defence, and ate up the yards in front of him. A pop back inside to North and the giant wing couldn’t be stopped as he galloped in under the posts to give Myler an easy conversion.

A mistake from Protheroe gave the Dragons an opportunity to strike back, however, with a scrum five metres out; and the hosts succeed in getting over the line through a barrelling run from centre Roberts. A little over ten minutes remained with the scores at twenty apiece.

Ospreys responded almost immediately after Dragons’ replacement back row, Lewis Evans, failed to roll away from the ruck. The touch judges raised their flags as Myler sent the ball sailing between the uprights.

Another penalty from a scrum on half-way granted Ospreys another opportunity to turn the screw, and Myler kicked the ball to touch deep into Dragons’ 22. The maul yielded yet another penalty, and the maul proved to be a potent weapon, granting Otten a path to the try line, and Ospreys’ third try of the evening.

The clock turned red for a good five minutes, with penalties swinging from team to team, and with a lineout five metres, Otten was inches away from claiming the fourth try bonus-points for his side. The game ended 20-28 in favour of the visitors, with Mat Protheroe earning the player of the match award.

“Through the week we got given a license to counterattack and run; maybe too much at times, as we possibly overplayed in some areas!

“We’ve had targets and we’ve made leaps and bounds in the last 6 months. There’s a really good vibe around the camp. I’m back home and loving it.” – Mat Protheroe, Guinness Player of the Match

There will be a break from the Guinness PRO14 as we head into the second leg of the European Challenge Cup, welcoming Worcester Warriors to the Liberty next weekend.